Overall impressed with the watch, Great start to the watch and competes well in the $40-$80 smartwatch space. However after having tried other Amazfit watches there’s definitely room for improvement even given the hardware limitations.

Those all sound like features the Wyze Band has… Why wouldn’t they include them on what is essentially the Band’s successor? WHAT WERE THEY THINKING?!

Is there a separate App to download for the watch or its built into the wyze app where i view my band and cameras.

For the price, I purchased the 47mm size as curious how it fits on the arm. A cheaper experiment then say buying an Oppo watch only having to return it.

same app, in fact if you hit the add device button you will see them under lifestyle.
Mine just came, but it’s similar in weight and band size to my old fitbit. it’s a little heavier than the wyze band, and I’m wearing both the band and watch 47 right now and even though I agree with above the raise to wake needs to be tweaked, the watch is doing a lot better with it than my band.

The brightness and clarity on it is pretty great too.

So as not to double post,
wishlist items:
More custom watch faces - I’d like to see the photo option with the watch face in the middle (both analog and digital) as opposed to shifted from the center. Coming from Pebble I’m used to a lot more customization that I’d love to see but can understand if it doesn’t get to that level. (with Pebble, I as able to build a custom face with custom hands on the watch that resembled a certain trademarked rodent - which is good, because the company had no involvement, but also bad, because trademarks)

Screen wake time does not appear to be able to be changed. this is a feature in the band, so I don’t see why the watch could also get it.

ability to rearrange/remove apps (I’m sure the Cycle Tracker is great, but it’s not useful to everyone…)

Notifications are only showing limited info on the watch.
I’m going to attach a screenshot to better explain this, but on the band an email displays the subject, who it’s from, and part of the message, on the band it’s just the from and a lot of blank space. 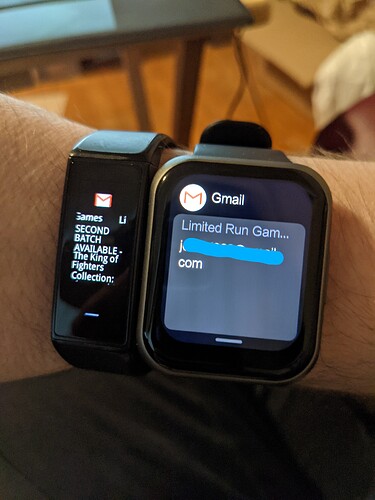 Otherwise, I’m excited to see what this can do.

Add weather to the watch face. The screen is big enough to put the temperature and a condition symbol (sunny, cloudy, rainy, snowy, windy, etc) along with the time & date.

Wyze cam snapshots? Would love to actually see when a human is detected at a glance so I know if I need to pull my phone out.

Media controls. If I’m playing music on my phone, it would be great to be able to have some minimal controls from the watch, like skip song, change the volume, shuffle the queue, etc.

My biggest complaint is the weather info. I don’t know where it is pulling the data from, but my weather info is either not updating, or the temperature is 10-15 degrees off. I will continue to monitor it.

As far as feature requests. Rearranging the app icons as mentioned would be great. A few more watch face options would be nice as well, but it’s not the end of the world.

I know this might not be super useful, but a simple calculator could come in handy from time to time, and I’d imagine it wouldn’t be hard to develop. I agree that simple playback controls if music is playing such as pause, play, forward, etc. And lastly, while I don’t expect full texting, etc. It would be nice if a phone call comes through, to choose a default reply of “can I call you later” or “I can’t talk right now.”

Those are a few things off the top of my head.

Excuse me. How do I get it to synchronize my messages and emails and show them on my watch.

If I wear it on my right wrist, I’d like the display to flip so that I could have the button facing “front,” like it is on the left wrist. The wrist selection option seems as if it should do that, but it doesn’t

I would agree that the watch faces are not very good. I just got my watch today and I was surprised to not even see a face with just digital numbers (horizontally) and date/time, with weather readout. I didn’t like any of the watch faces, but that is subjective. The ability to customize an existing face would solve most of that. The build of the watch seems pretty good and I am excited to see how the battery life and activity tracking does.

Considering this is an early release, it is most likely comparable with early Apple Watch functionality. For the price a no brainer. I bought one just to support Wyze and make sure we have some competition. I look forward to seeing how this watch improves with suggestions and time.

Got my watch. Would like to have the vibrate be more intense and also double tap to turn on screen as opposed to raise to turn on, and removing icons not used.

Go into the app, choose the watch and then select Notifications. there you can toggle on and off notifications you would like to see. Note that there may be a bug with email as it only shows the From and To addresses or names - not the subject or Body of the email

Question, if you want the button to be facing away from your hand, couldn’t you just indicate it is on your left hand and wear it on the right? I wear mine on the left so not accustomed to the right wrist. Just curious.

No. The display is oriented so that it’s only “upright” with the button on the right. I can’t see what the choice of wrists could be for, then

oh - that’s odd. Might be a bug. I just checked and agree, why pick a wrist if nothing changes.

Please add the ability to launch Tasker as a shortcut item passing it a single variable like a one two three four this would enable us to do a lot more with this watch.

2 posts were merged into an existing topic: Wyze Watch: add steps/data/battery to photos clock face and other clock face options

I would like to view my cameras (separately of course) on my Wyze watch. Seems like it should be a no-brainer for Wyze. What an outstanding feature this would be to distinguish Wyze watches from Apple watches because apparently for some reason many are comparing the two.

Seems like that could work, if the footage can go over BT fast enough. (Also, does the watch only come with the more traditional watch strap, or does it also come with one more like the Wyze Band where you just need to snap it into place?)