Poor support for existing watches and yet another size is added. Why?
Also a selling feature on the promotion are the wonderful watch faces available…. Really?

You can make a custom watch face on both sizes. I did. The following competition is closed:

Hey friends - As you might’ve heard, Wyze Watch 47mm is back on wyze.com! With Mother’s Day right around the corner, there’s even more to celebrate this weekend, so let’s have a special giveaway!

I do hope this restock actually fixes the issue with corrosion of the charging contacts. Maybe that is why they decided to restock? (fingers crossed) I’ve had two of them do it now and stopped trying to send them back for a swap. I really prefer the 44mm size factor to the 47 (I have them both) and for the price, it really is a value even considering it is NOT an Apple watch.

The Original 44mm was a Defect (as to why it was pulled) …Overcharging of the battery resulted to “Swollen” battery that leaked onto Charger Contact pins which rusted. Also, the bands had wrist “Rash” issues.

Mine was a preorder and I haven’t had any issues with it.

The Original 44mm was a Defect (as to why it was pulled) …Overcharging of the battery resulted to “Swollen” battery that leaked onto Charger Contact pins which rusted.

What is your reference as to why it was pulled? If true, seems like we could invoke a recall or something. Otherwise why did you post that

If you search the form…There are threads on exploding, rusting and Band Rash with V1 of 44mm. Le’s see if V2 was fixed.
https://forums.wyze.com/t/wyze-watch-44-exploded/183910

Are you gaslighting us? The first reference is about bezel size. The second doesn’t mention anything about recalls or even your defects.

You are a dedicated detractor sir, and I congratulate you on that. Many young’uns don’t know what they want to be when they grow up, but looking at your history you have found your niche!

I got the “restock” 44mm watch today. And I am happy to announce, they indeed have fixed the corrosion issue by removing the two magnets/contacts that were causing the issue. See photo of my old 44mm and the new one that arrived today (with band). So as far as hardware, this is a V2 on a certain level, but I get why they are not calling it that since it seems like the same watch in all other respects. They simply got rid of a known hardware problem and quietly pulled it for a spell until remedied and restocked, They didn’t improve it to “next-gen” level. Which is just fine by me! Thankful they fixed it! 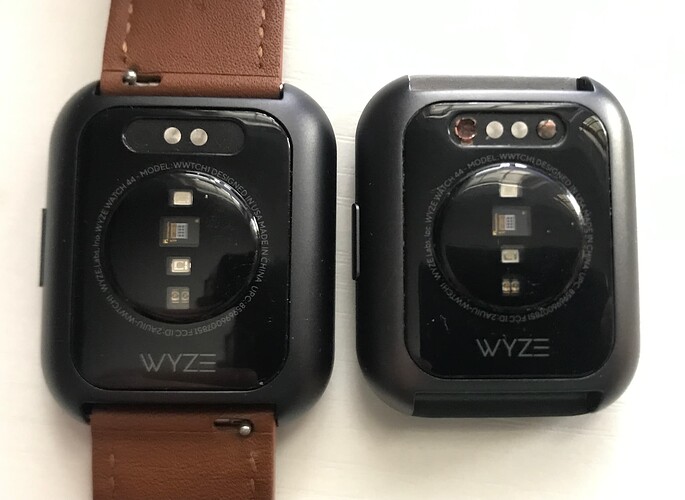 I wish I could say the same about my preorder. Every update seems to kill it , I recently got an iPhone with which it worked for about 2 weeks , Now it won’t pair ( like it did from time to time with my Samsung Android)

That’s really odd, and disappointing. I’ve never had any issues with mine. I use a pixel 3 (android). It sucks yours has issues!

Good points. Most every electronics product I’ve had has a line at the end of the specifications section ‘Specifications subject to change without notice’. I guess this is an example why.