Hi there, i have a humidity sensor in the cellar, its a small unit with 9v battery & a audible alarm, I wanted to hook up a 3v wyze sense sensor to it, I managed by connecting a transistor in place of the audible alarm so it sends a signal to the wyze sense.

The unit has a test button. I tested it & it works, when the sound would have been triggered , the wyze sense will indicate ‘closed’ to the Wyze app.

My question is by having the transistor btwn two systems with different voltages, 3v & 9v , am i discharging the 9v battery into the 3V one? I measured 0 Volts at the wyze sense battery terminals with the 9v battery installed in the alarm unit . apologies for the rough schematic . 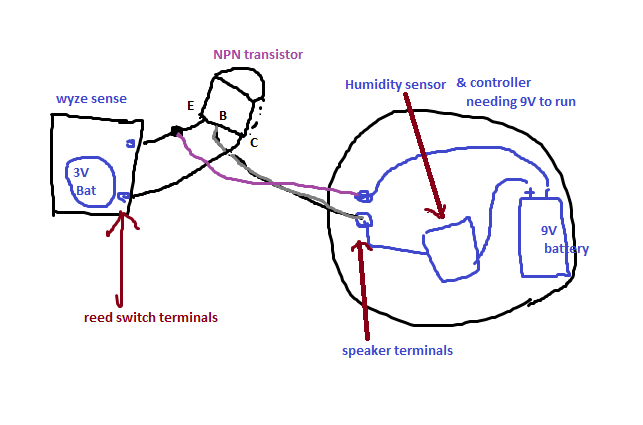 There’s little chance that the 9V battery will ‘discharge into the 3V battery’.
When the humidity sensor triggers, a voltage of some sort appears on its speaker output terminal. I can’t tell from your detailed

schematic the nature of the output. The ‘speaker’ might be a piezo-electric transducer, or it might be a tiny electro-dynamic speaker. Probably the former. In any event, the output signal will be AC, produced by some sort of oscillator circuit inside the humidity sensor. During the positive half of the AC output, the B-E junction of the transistor will be forward-biased, causing the transistor to turn on. Current from the Wyze 3V circuitry then flows through the transistor (from C-E), making the Wyze sensor think that the reed switch has closed. There’s really no path for current from the 9V battery to discharge into the Wyze battery, unless the transistor blows.

However, the NPN transistor may in harm’s way. When the humidity sensor triggers, the speaker output terminal would have had some sort of AC waveform driving the audio transducer, probably a square wave alternating between 0 and 9V (depending on the design of its oscillator) . But the B-E junction in your transistor is now effectively shorting the speaker line to ground, as the junction is a diode. The current flowing through the junction will be limited by the output impedance of the oscillator circuit. To protect the transistor, I’d suggest adding a series resistor between the base and the speaker output terminal. A 10K resistor would limit the current to less than 1mA (or less), which should keep the B-E junction happy, while still turning the transistor on and thus triggering the Wyze sensor.

Thanks! yes it is a piezo electric speaker, i just added the resistor and tested and it works fine.

btw, in theory, could i wire up a second sensing unit to the same wyze sense sensor (indicated as 2 in the new schematic, resistors are also marked in solid blue now) ? i am wondering about two scenarios, where first the 2nd unit is in a different cellar room , so will register an alarm at a different time from the 1st, and second where the two units are in the same room , and will both detect & signal alarms simultaneously. 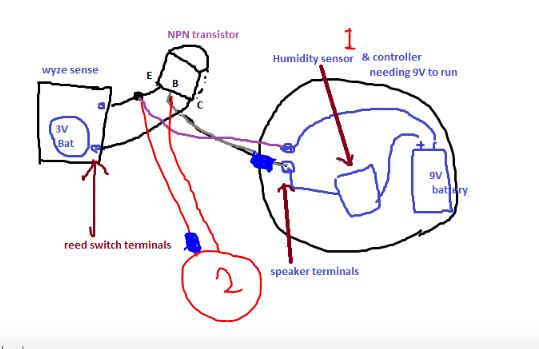 You should be able to parallel two humidity sensors, as depicted in your schematic. However, it would be advisable to add a diode (1N4001 or similar) in series with each of the resistors. That will prevent current from flowing out of one of the humidity sensors and back into the other one (via the tandemed connection to the base lead).

BTW, I’m pretty sure that you could leave the piezo transducer connected. If/when a humidity sensor triggers, it might be useful to hear it signalling, especially if you have two sensors in the cellar. The load imposed by the interface to the Wyze (a 10K resistor, if that’s what you used) is pretty small. I suspect that the piezo would still activate.

It would be helpful to others who come across this thread if you could explain the surgery you did on the Wyze sensor: how you opened it up, how/where you connected to the reed switch, etc. Note that the polarity of the connections made inside the Wyze sensor is important – the transistor’s E lead needs to go on the negative side of the Wyze circuitry.

@WyzeGwendolyn
Gwen, This gets my vote for the Wyze Hack of the Month Award

I played around with the Wyze sense, I took one apart, and attached 2 leads from where the “magnetic switch” is, or was now,

I got the idea from a youtube video, although mine is a bit different in terms that i did not set mine up with the cardboard as he did, but the idea was the same

Edit: it was a fun little project

thanks for your youtube link, it shows how to reach to the reed switch terminals (in my case, i didnt remove the reed switch at all, i just soldered the transistor connections to the same terminals). the reed switch is of the ‘normally open’ type, so it doesnt interfere with operation (as long as there are no magnets nearby)

Gotta admit, a lot of the specifics went over my head. But this is super snazzy! Thanks for bringing me over, @kyphos.

This clever mod has received the October Community Spotlight Award.