You are welcome! Glad it is working.

Wow,
Tripping headlights, detecting them as people, is a new one, to me !

Wide & Super bright, Beams of light trip mine and report those as just motion.
I had to, " zone down to the bone" . To stop the constant alert chirps.
A not so happy solution, with 5-8 headlight trips per hr. (Depending on traffic)

As I said before, City Dwelling cars, with super bright, wide angle headlights are my v3 cams, Kryptonite.

Alerts for non existent people would truly, freak me out !

DoorBell and Outdoor Cam with me on Tripping detection.

If you already have the detection zone set up, as you have, why not try taping a small piece of paper or cardboard half way over the lens? you just need it level with the road and you have the camera very close to perfectly horizontal… id either tape something over half of the lens, or on the outside of the window as to cover up the road… although you may get away with a small cover on the left and right side, as its when the car comes into view with headlights thats causing your issue. just a thought.

But with v3,
The color makes me want to see the whole picture.

Having the same issue with headlights, nothing I do fixes it…Only issue is at night and i can’t use IR either thru my window as It whitewashes out…frustrating…

Sadly the issue(s) have gotten worse.

I’m now averaging, one false out of the detection zone alert, at night. Every 2-5 mins.

I live on a busy avenue. No Bueno !

I would like a little, " parked auto security",in my driveway, for some peace of mind.

Is that too much to ask, wyze ?

@BigBurly13, there may be hope for your V3. Just make sure the firmware is up to date. (Or, is it the update that caused your change in cam behavior?)

The new firmware has introduced a major shift in the AI detection force.

Now, the detection zone not only restricts activation (Detects Motion) to movement occuring within the DZ, but the AI bot and the green Motion Tracking boxes are also now restricted by the DZ.

So, theoretically, you should no longer be getting AI tagged Events that occur outside the DZ.

We recently released this feature to many of our cameras (v2/pan/v3). Users will just need to make sure their firmware is up to date. With this feature, the motion region is compared with the detection zone, and the AI will only tag the video if there is an overlap.

Followup comment:
[This feature] is in the general release firmware. Not all new features are mentioned in the firmware release since some of them are only service related.

mine are all new, updated firmware… I’ve made the DZ only one box high and still lights set it off…

Good luck! I tested it and it looks to be functioning to exclude all motion outside the DZ from both motion activation and AI tagging\motion tracking.

Yes, significant light changes within the DZ will still activate motion. This is the specific function of the Light Pixelation Algorithms Wyze uses. It is also one of the major limitations the cams have as it is much less effective than PIR, however it does increase detection range. A tradeoff if you will. There are posts here in the forum of users pairing the cam with a V2 PIR and scheduling rules to use the PIR as a motion activation device at night rather than using the cam pixellation.

The only function besides the DZ to try and restrict the area that will activate it is the sensitivity setting. Lowering the sensitivity will raise the comparitive light threshold between adjacent pixels required to activate.

Thx, it is working a bit better now or can I say, more like, as in yrs past.

I just have to try “burglar mode” by walking up to the car at night in order to fine tune my settings.

I like the peace of mind, that my car is safe at night.

This frustrating issue is bugging me too. Pay for Cam Plus but I am not impressed that they allow selections like Person, Vehicle, Package or Pet when they go off on headlights. I can’t tell any difference at all with the AI so far. If they really could tell the given options, then headlights out of the frame shouldn’t set it off. Or at least let sensitivity make a difference. Can’t tell any difference with that either so far. I keep trying things but nothing works so far.

Frustrating indeed,
My issue has gotten worse in past few months, not better.

I am not installing flood lights, to outshine the illegal headlights, (ingenious, yet not so neighborly),

Just because some city folk, are using illegal headlights, to drive at nite.

Although, I am thankful to Wyze for the inexpensive cam, to protect my property n I. Long, long, ago.

But, times r a chgin. How about a cam fix. Sooner than later ?

I share the same frustration. My V3 camera focused on the front of the house is useless at night, since I have to turn it off to suppress the wall-to-wall alerts triggered by cars heading out to work before the dawn, and coming home from work after sunset. As for floodlights, I’m not sure what would prevent the bad guys from eliminating them – so to speak.

My cam in the rear is shielded from the headlights , so I can let run all night. But as for the front, when it gets dark, I’m forced to turn it off. That is most unsatisfactory, to say the least!

If motion detection is triggered by a change in light, then I would think that all surveillance cameras would have the same problem. If there is a camera which is proof against this sort of false alarm, I’d love to know what it is!

If there is a camera which is proof against this sort of false alarm, I’d love to know what it is!

Yes, a pixel movement system like the V3 will always trip to visible headlights. Best to do what I do, which is to add a PIR motion sensor like the Sense.

During the day I use both the camera’s pixel motion sensing and the PIR sensor, but you may not want to do that if you have a daytime issue that makes you also fall back to the PIR.

At night I turn off the camera’s motion sensing and depend only on the PIR. If you correctly align it not to trigger on false heat sources, it works GREAT.

Problem solved, at least for me.

News hound. How does one add this Sense(Pir ) to this camera setup?

Once you install the Sense motion sensor (I have an old V1 motion sensor double-side-taped to the top of my front door frame), you just define the video camera(s) you would like to record a short clip when that sensor trips. You will get notified quicker than someone can reach the front door, and you will find those clips on the Events tab.

The AI does not evaluate sensor videos, but I already consider any warm presence approaching my front door as a high priority. So being a Vehicle, Pet, or Person is already a high probability.

I also have the same sensor trip a Wyze Bulb, which I use as a signal light. 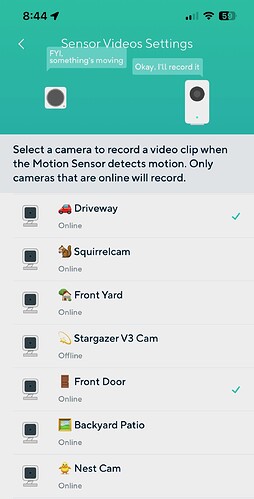