Wondering if the wyze team will respond… maybe they’re crossing their fingers and hoping the problem solves itself?

Maybe the recent recalled firmware .248 (?) was an attempt to fix this problem?

It should have been a simple fix, comment out the code that references these unused domains. But knowing Wyze, could they have screwed it all up?

And after my post last night, I rebooted the camera once more - and this is the resulting effect: 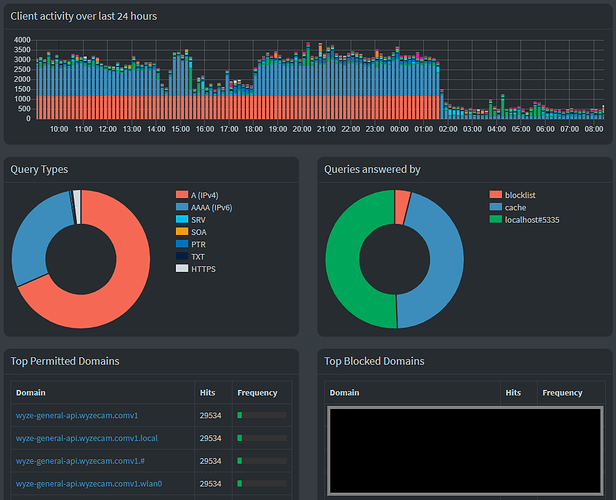 The traffic immediately went away again.

To be clear, this is a -single- v3 Camera on my network generating this traffic. I have a few more in a box I was going to install, but I’m now holding off until I this is corrected.

It should have been a simple fix, comment out the code that references these unused domains.

Exactly. There’s no way this can be hard to address. Hell even if they don’t have access to the source code for the app they could add host file entries on the camera at the OS layer!

Totally unacceptable. What is a $20 cam worth if you have to put in a $2k firewall to provide basic cyber security. This is crap.

The firewall here is running Opnsense (free) on a Qotom mini-pc (Intel Core i7-7500U) - so not a commercial product in the slightest but it does isolate and give me some granularity in how I have things configured.

The Pi-Hole (free) where you are seeing these stats generated is on a Raspberry Pi 4 Model B w/8gb ram so also not a huge expense for the setup. I just like knowing what’s going on within my network and being able to block ads, malware, and such across all the network devices here.

That said… here is a good example of what happens with the v3 camera: 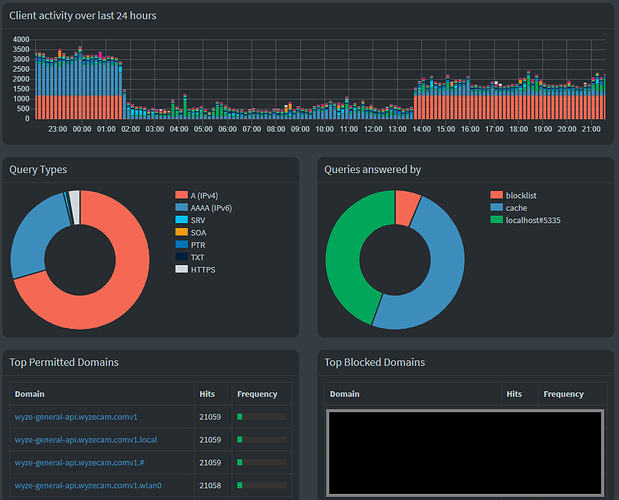 You can clearly see where I rebooted the device because the traffic immediately dropped off.
Approximately 12 hours later the DNS lookup traffic kicks back into high gear from the device.

Nice, do you have throughput and latency figures? Thx

@WyzeDongsheng Can you please get someone on this?

I went ahead and just blacklisted the address for now to kill the lookup attempts – but for awareness it seems to be polling with a lookup every two seconds like clockwork: 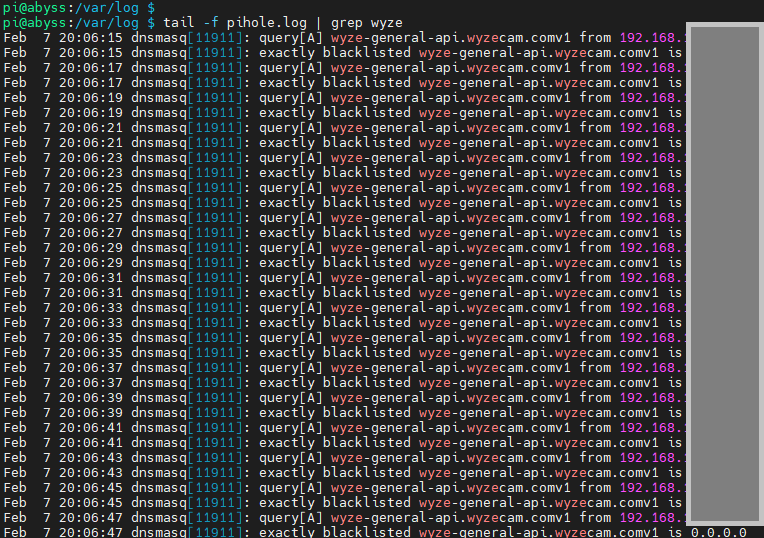 My guess is that the intended target hostname was : wyze-general-api.wyzecam.com

Blocking the address isn’t hampering access to the camera at the to moment - so, I suppose I’ll be waiting for a new firmware to drop that addresses this.

I wonder what Wyze’s other devices do? Only have two v2 cams and some bricked door sensors at this point although I’m still waiting for my doorbell.

For comparison, I have an Ecobee3 thermostat and the only DNS traffic I see is when my network reboots at 03:00 each day. 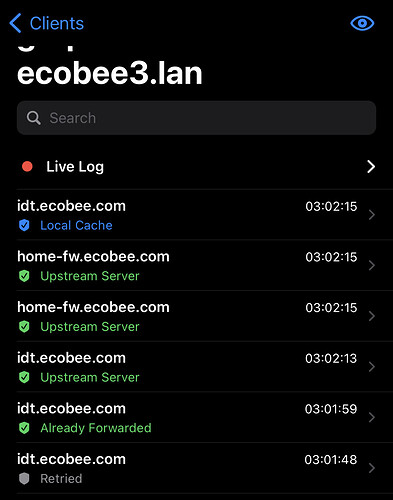 I wonder what Wyze’s other devices do?

I honestly think there was an “oops” in this one and that some local test harness code escaped into a production release. Before the latest firmware I never experienced this behavior - so it’s somewhat aberrant.

That’s what I thought, too.

Then what does it say about Wyze’s beta testers, AKA, internal QA processes?

Then what does it say about Wyze’s beta testers, AKA, internal QA processes?

Customers (you and I) are the beta testers. Been that way since my first Wyze product way back when and there’s been no change. Wyze software and firmware QA is the worst I’ve ever experienced.

The unfortunate thing that I’m observing is the more products released the crappier my overall WYZE experience becomes.

I’m still recommend WYZE cams to friends and family, but my recommendation now comes with a disclaimer. “You can’t go wrong for $20 a cam ($40 after shipping and a microSD card), but if you’re looking for the utmost reliability then you need to look elsewhere and plan on spending far more.”

Thank you for posting this. My network has gotten significantly slower after installing these cams but couldn’t pinpoint what was going on other than unplugging the cams. This is insane it wasn’t caught before release.

Noob question, but is there an easy way for me to monitor if this is happening in my network using a windows machine?

Sorry about this! We’re working on a patch that will fix this bug and appreciate the folks that worked with us to identify the issue.