I know the Wyze Cam Outdoor has recently been released however, I have some ideas for a second version of the Outdoor Cam which I think a lot of people would like as well. There are definitely some improvements that need to be made and I have a lot listed below.

Being able to remotely access the base through Wyze’s app to watch the locally recorded videos would be the icing on the cake!
6. Thanks to @garylenz3 for this idea! It would be great if Wyze offered an outdoor cam with a small solar panel on top of the housing, so you’d never have to manually recharge the battery for a cam in an area with enough sunlight.
7. Thanks to @my560sec for this idea! Make the camera be able to pan around. An outdoor ptz camera.
8. Multiple people have said that the Wyze Outdoor Cam Base Station should have POE. This would allow you to only use one cable for the Internet and Power.
9. Thanks to @les1 for this idea! It would be useful to be able to add the “spot light” attachment to the Outdoor Cam.

Wyze made a great Outdoor Camera don’t get me wrong! I’m going to be buying a few of these for my house but if it would have had the option to be plugged and still be weatherproof I would have bought about 12. I want to put these up and forget about them. I don’t want to get up on a ladder every 4-6 months. I need them to be able to be plugged in and stay weatherproof as well as record continuously. These are the most important things for me. I do like the battery option for areas I don’t have power. I do have a few places I will be putting these cameras. But the places I do have power it would be nice to have them plugged in and have continuous recording just like the Wyze Cam V2. If Wyze could make a second version of Outdoor Cam with the same features it has now but with support to be plugged in and have continuous recording and maybe a few other features that would be great! Having the option for the camera to run on battery or be plugged in will reach the most amount of users.

I think others will also want some of these features and I hope Wyze will listen to us and maybe in another 2 years we will see Wyze Cam Outdoor V2!

Since they directly recommend against keeping it plugged in, I can’t see this ever happening with this device.

We want a wyzecam outdoor with the ability to record continuously 24/7 just like the wyzecam v2 while being plug in.

I would guess (just a guess) that he or she has been patiently waiting 2 years for an approved outdoor WyzeCam and finds it won’t do what we expected.

Hopefully Wyze can release a second version of the Outdoor Camera that is made to be plugged in so it will have continuous recording?

Possibly but the info has been posted for a while now.
I was surprised they designed it to not be used while plugged in. WYZE employees had confirmed that it would have USB and battery. They neglected to tell us the USB port was for indoor use only.

I was waiting for a plug in outdoor cam and planned on upgrading all my V2’s, but I’m just not interested in recharging a battery

The new outdoor cam looks like a great product, just doesn’t match what I was hoping for.

A waterproof V2 that can be plugged into power and doesn’t have a battery would be great!

Yes yes yes!! I wish the Outdoor Cam was meant to be plugged in and have continuous recording!!

You can buy the new Logitech Circle View camera. It seems to support what you want and only costs 100 dollars more than the New Wyze outdoor cam?

Or something like the Yi Outdoor Camera that at $39 with free shipping is $20 LESS than the new Wyze? 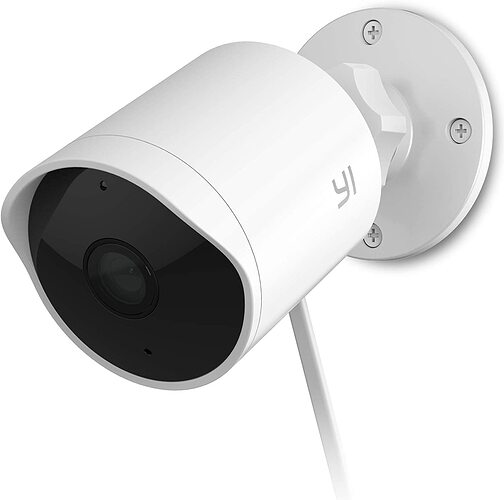 Other than having to pay for cloud storage which raises the cost considerably.

Yes, true. I took a look at their plan options the other day. They’re… weird.

I have to admit I don’t understand what they are doing there.

Please make a wyze cam that is weather proof.
Nothing more than that.
Either take the current wyze cam and make it weather-proof,
Or, take the Outdoor Wyze Cam, take the battery out, and make the plug weatherproof in some way.

This is a wishlist for Wyze products not a comparison of much more expensive products. Lol

Indeed. But it’s always good to have choices!

Yes most of use these, but not the point of the wishlist request.