Wyze App - In device information, show me the timestamp of the last communication

It is terrible diagnosing devices that may or may not be truly online. I am assuming these are using Amazon IOT/MQTT. So there is most likely data flowing one way from devices to the cloud; and there should be a heartbeat or “are you there” period message if not data is received.

One thing that would truly help us users is for the App to tell me the last successful piece of data from the device (event, heartbeat response, etc).

For example, I have a sensor that is working. Red LED indicating sensor read, status should be published to bridge where the bridge then “sends” that data on behalf of the sensor. The app is not showing the state change. Is it a problem with the app (UI) or do I have a device communication issue where the app is not showing it as disconnected? So, it would be super helpful to know when the last true comms occurred for self diagnosing my devices. 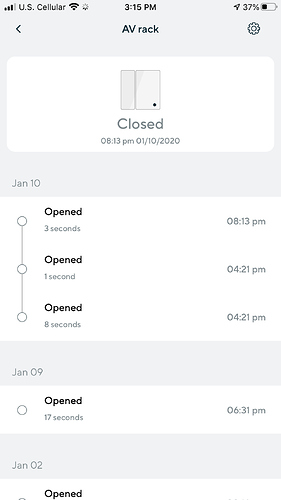 If my Lutron devices stop communicating or my smart garage door I don’t get a notification or communication of any type.

That’s not saying Lutron is better. It’s saying that the device need a way to help self-service people self diagnose issues.

I’m not saying Lutron is better. I’m saying it seems to be pretty standard

I work for a company doing IoT devices and user portal/apps, this is one item that customers demand and appreciate.

Maybe appreciate. But demand? Your votes aren’t reflective of that. Just saying

Customers don’t care or maybe they just called support when they are having problems. This is also a self service portal where there are handfuls of users in and out as regulars.

The users are asked to:

All with the goal of self monitoring. Right now, I don’t trust the bridge. I have had two bridges act “intermittently” according to support. So here I am, opening and closing doors/windows at random to make sure the system is operating (in the dead of winter no less).

If the App just gave me the last known timestamp of good communication, all that diagnosing is not required. App says it’s closed, let communication was 10 minutes ago. Good to go.

Right now, door opened not recognized. App gives me the last time it says it was opened (which is then useless because it is no longer accurate). The app says the last KNOWN signal strength (which is hugely misleading). On top of the fact that their “offline” detection obviously has some known bugs (which, tell me the last communication and I don’t care what the offline indicator says).

So, in a fully self service product, if I am spending more time proving the product is working compared to trusting the product works, then the self-service IoT strategy is a failure.

Our customers say thing same thing to us. If I have to expend manpower to prove what your product tells me is true, then the product has failed.

All I am proposing is adding information to AID in diagnosing; I am not even asking for a long term solution. And given the AWS IoT provides this easily (as well as other similar off the shelf cloud products), exposing it to the user is a non-issue.

Also, thanks for pointing that out about Lutron, I’ll know to steer clear from their product.

I think Wyze will determine if this is something to pursue based on votes. I and many others don’t run around opening and closing windows out of paranoia that their device isn’t reporting every 5 mins. Ultimately the vote will determine the outcome.

And like I said Lutron makes good products and seems to follow Iot protocol. You want a niche service. It’s important to you but apparently not the masses. Or not yet anyway. We shall watch the votes. I wish you good luck.

It is performing as advertised. You are wanting to add features. That’s a big difference.