Why was Android hardware decoding removed?

Yes, the lag in live view is disappointing, even in the beta app which is slightly better then the current non-beta app without hardware acceleration available. I have found, however, that everything works perfectly well, if you’re willing to select 360p in live view. The reduction in resolution is disappointing though, particularly when zoomed in. Too bad the ability to enable the innate hardware acceleration it’s not readily available since the exact same device ran flawlessly when it was.

Add me to the list of people whose cameras are now useless. 6 Cameras. Please replace the hardware decoding!

Why would you ever REMOVE an option?!

everything works perfectly well, if you’re willing to select 360p in live view.

360p is a non-starter for most of us. One of the main reasons I’ve bought about 15 cameras was the sharpness of the picture at full resolution. So I will run my old versions of the firmware and app as long as I can.

I agree. I was hoping we could move to 4K UHD if we changed resolution at all at this price point.

Why would you ever REMOVE an option?!

It was removed when they were required to switch libraries

Give this fix a try. Let Wyze know what your phone hardware / OS is in the thread below if the fix doesn’t work for you:

Sorry for the delay, folks! We just released Android 2.5.36. This has an improvement for the video lag issues that some people ran into with the first 2.5 launch. Please try it out and let us know how it goes! We know that this has been a pain for people running into this problem. We don’t consider ourselves done with improving this but we have had promising feedback from beta testing and didn’t want to make people wait longer while we continue working. Android 2.5.36 Improved the video lag …

Anyone have a status update? Does the new version fix anything? Wyze, can you elaborate on what this new library is? Is this a third party library, or something that is included with Android? People are indicating that you were forced to use this new library. I find this difficult to believe. Please elaborate on what library you were using before and what you are using now.

My understanding is they’re still working on improving the video performance for older and/or less powerful devices within the environment of the required “new library.” The 2.5.36 app update restores performance for some affected devices, improves it for others, and does nothing for the unlucky few.

From seven days ago:

I was told since hardware acceleration didn’t affect a lot of users they were not going to try and bring it back.

Which suggests it is a component that could be integrated with the “new library” if demand and available resources warranted it.

This is the only direct reference to the issue I found in the 2.6 beta app thread:

But if this has anything to do with the hardware decoder being taken out, I may have to roll back to when it was available. I don’t want to have to take out my SD card and put it into my computer each time I need to scrub through the timeline for a video that i want to see.

Sometime ago, they announced an app revision that they claim alleviates the problem, I don’t know about others, but I see a marked improvement on my mobile devices. Whether that app revision is or isn’t doing hardware video decoding, I don’t know, but it sure is much better than before.

In case anyone else is running a Nexus 7 tablet, here’s where two users are at:

My understanding is they’re still working on improving the video performance for older and/or less powerful devices within the environment of the required “new library.”

Hi @WyzeGwendolyn, will you let us know here when these efforts are complete - ie, Wyze has done all it can and doesn’t intend to do anymore? Thanks!

I’ll try, but I don’t know if we’ll actually hit that point since connectivity and performance are general goals.

Thanks Gwendolyn. Sure, I get that, makes sense. Still…

Would you be willing to say at some point, “This is no longer a top priority”?

People might hold out hope longer than they should and become frustrated waiting.

It’s obvious that’s not their top priority. The problem is already for few months. Nothing changed. They’re hoping that all the folks with older equipment will upgrade.
I’m my case that’s disaster.
I bought six cameras, and brand new 10" tablet for preview. Obviously I choose $160 one instead of $1000 one. But still, Netflix run smoothly, all the things works. Instead of new camera software.
Now it’s unusable. Thankfully I still can use old app version and block update on store.

So I assume that WYZE should now add BIG WARNING: If you want to see your camera preview without 10 second LAG, you need to buy tablet worth at least $500. We doesn’t support cheaper ones. Even if they’re brand new.

It actually was a very high priority when it happened and has improved quite a bit in the newer updates. I am running it on an old Nexus tablet and when hardware decoding was removed I had over 20 seconds lag and could not watch anything in group view. With the current version there is on a second or two lag that is a huge improvement in my mind.

Unfortunately in my case nothing changed at all.

I am tired of waiting. My entire android smartphone is now forced to be in manual update mode and I have scores of apps that now require I manually upgrade them to prevent his rediculous situation from reinstalling the newest Wyze app version. IT’s PATHETIC that you all can’t simply add a 64 bit interface to your own custom library to simply toggle on some *#@! HW acceleration bits. For gawd sakes this is not rocket science. Any hack software noobie on the planet can do this kind of easy stuff. Just give us the option to turn it on or off! Should have been resolved the same day we identified all the problems it has caused.

It’s obvious that’s not their top priority. The problem is already for few months. Nothing changed. They’re hoping that all the folks with older equipment will upgrade.
I’m my case that’s disaster.
I bought six cameras, and brand new 10" tablet for preview.

I’ve a total of 21 cameras, plus a new 10" Amazon Fire.
I was messaged 3 weeks ago that they didn’t plan to add back hardware decoder if 95% of the users do not have the issue, and I should try another Beta. I did, still didn’t improve it.

I could run my Amazon Fire (unsupported) Android 6 with the prior version of the app (that had the hardware decoder) side by side with the new version of the Beta app on my Samsung J3 Android 7.1.1. I put my hand in front of a V2 camera and the old version showed my hand in about a second, took 30 seconds for the new version.
Now of course this is Beta, where cutting edge means you have to be prepared to bleed.
But Wyze needs to be honest and change the Operating Systems systems requirement from “Supports iOS 9.0 and Android 5.0 or later” to a much later Android OS.
Or fix the lag.

It’s still a great camera, with a great support community and if it will work better with a new $200 device it’s almost worth it.

There is no reason to force your device to manually update because of one app.
You can block individual apps from updating. 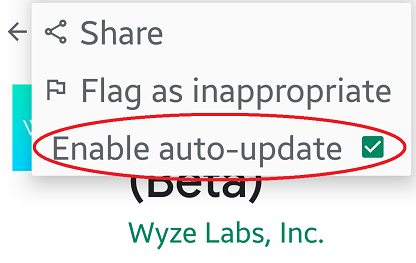 if 95% of the users do not have the issue

I wonder how Wyze is getting this figure?
If 95% of users don’t complain that doesn’t mean they don’t have the issue. It could mean the a lot of people don’t bother reporting issues because it doesn’t seem to get resolved anyway.
I am done begging Wyze to make their app accessible (readable) for people over 40.