Can someone tell me what the milliamp drain is per hour for a v2 running full spec without WiFi. Also, does the unit continue to try to connect continuously to WiFi every second and can that he turned off?

Couple of variables - are the IR LEDs on or off and to a lesser extent how much WiFi usable there. Rough numbers are about 1.5 watts or 300mA with the LEDs off and 2 watts or 400mA with the LEDs on. Yes, it will connect to the WiFi that it is configured for if it is available - you can’t turn that off. If you could turn it off, how would you turn the WiFi back on?

The reason I am asking is because I am trying to power it with a bank, and then have the bank recharged during other times. I won’t need WiFi, but I worried that it will continue to drain more energy trying persistantly to connect to WiFi (or, when a cell phone cannot find coverage, it goes into overtime trying to find a signal). Ir would be off.

Would this help? Write up from last year. 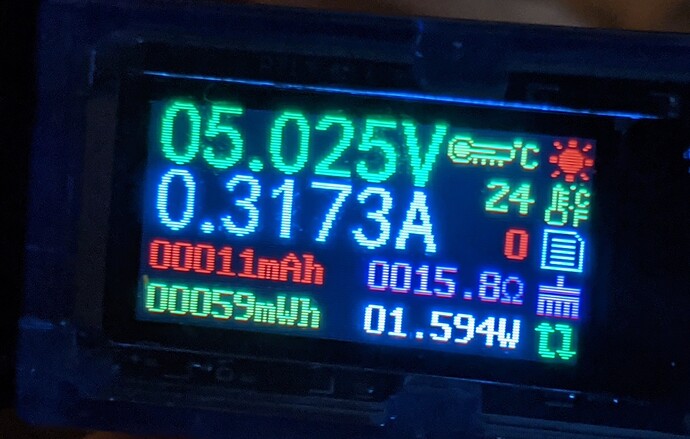 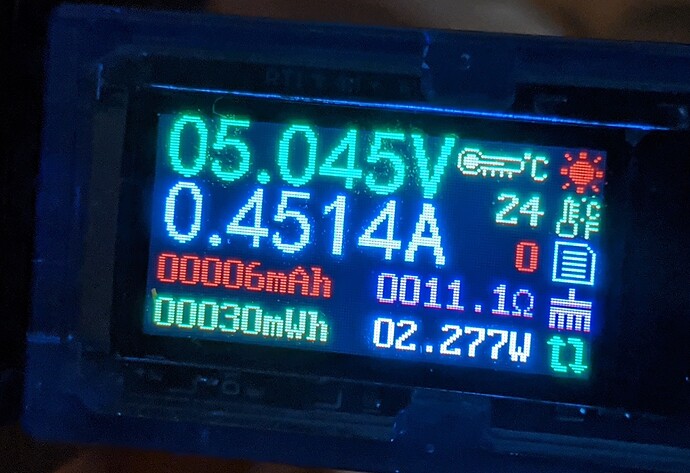 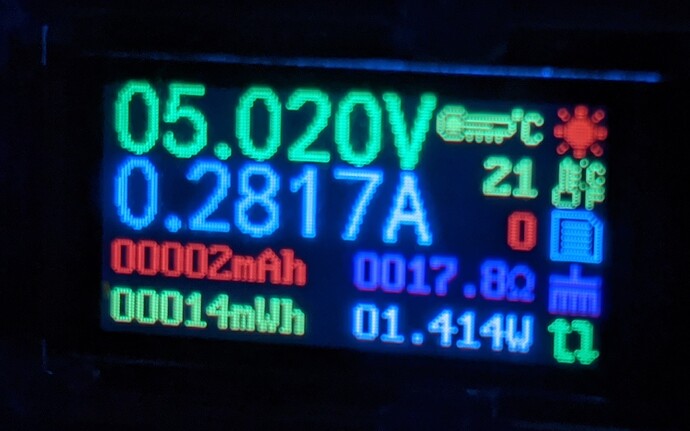 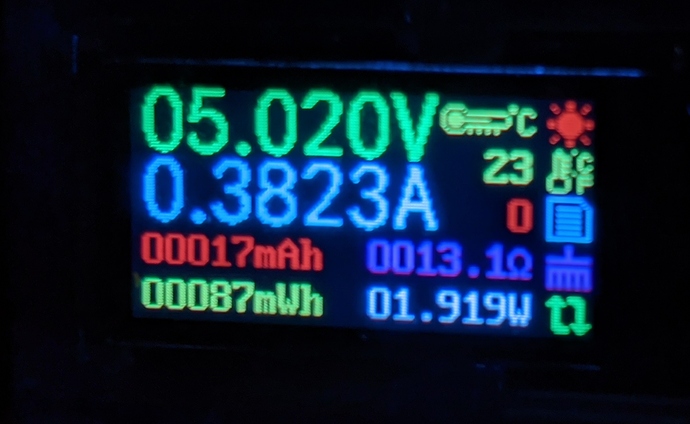 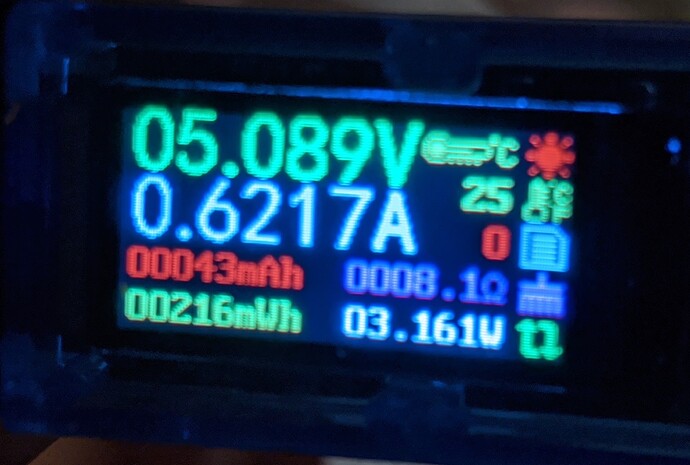 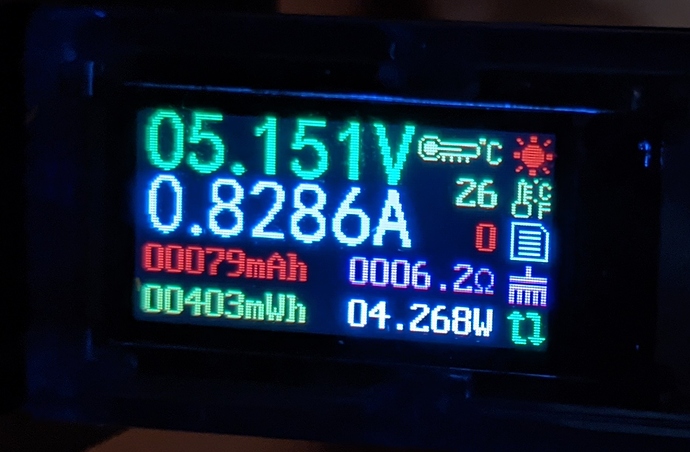 I just ran this setup for exactly 1 hour. (V2, supplied charging cord and 5v1a power brick, IR off, continuous recording, no event cloud recording, minimal live streaming only to verify settings.). The amps and volts stayed about what’s shown the whole time, unless I connected to Livestream then it spiked at about .450a usage I believe, then once connected it chilled out back around .300ish. 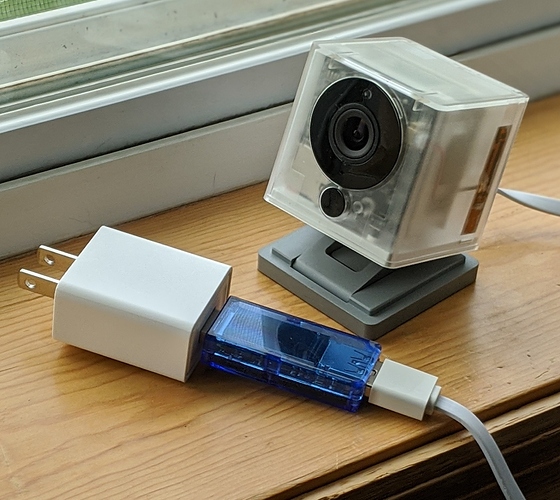 The below pic was taken right at one hour. 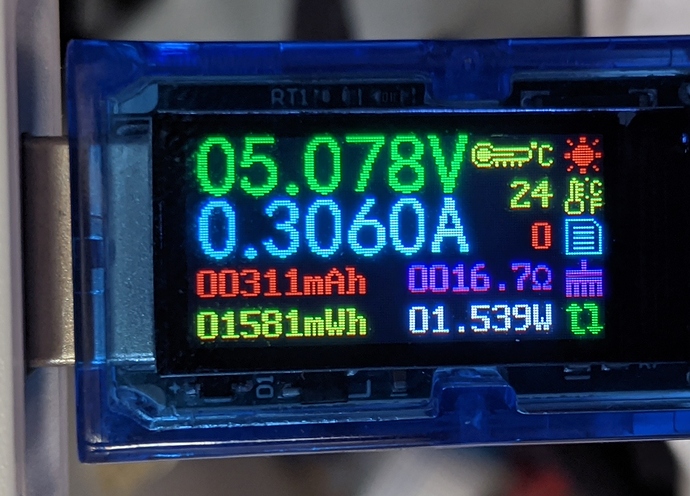 Thank you guys. As far as WiFi on and off configuration , I was hopeful for a sec that there was a non sanctioned firmware somewhere to open up options via ssh and to access the camera locally like the the official webcam firmware. I believe giving us an api will do wonders for Wyze and their cameras, especially now that and many will have v2s sitting around after an v3 upgrade.

I can envision so much that could be accomplished for the maker people fan api was released. Imagine integration with raspberry and the like, etc.

Cli via usb would be a good start.

The interesting part I remember from these discussions was that it uses just about the same amount of power when it is toggled “off”.

This is true. Because from what I understand, it never really is off…

I have been thinking about using a Wyze V3 in my car, overnight, to do some covert surveillance without killing the car battery. I have a couple 10,000mah power banks. Then I thought about the 450VA UPS that keeps my cable modem and router working for almost 2 hours during a power outage. The manufacturer’s page has a calculator “Run time for load” and when I arbitrarily enter 5 watts, it suggests the UPS would provide power for 6 hours 59 minutes. If you have a UPS and you’re a little bit crazy like me, you might consider using your UPS for short term video recording away from home.

My project is to protect the surround of my vehicle when it is parked. A couple of hours and to provide a rear view camera (I already have a front facing dash). It should be in range of WiFi when at home, and I may stuff a phone with hotspot when i park. I have not worked out the details yet.

As for running Wyze cameras from your vehicle. I currently have two V2 cameras and a V3 camera in my pickup truck. All are plugged into a cigarette lighter to quad USB outlet adapter that is always on. As long as I drive the truck every couple days, there is no problem powering all three cameras from the vehicle battery. The only time I ran the battery down was when I had COVID in December and did not start the truck for five days. The battery was way too low to start the engine.