Would be nice to be able to tag missed events to use the data to send to wyze. I had a package delivered with no alert. I had to browse through my playback feed which took forever.

When I found the footage of the package being delivered, it put the green motion box around the carrier but no alert sent or event created. There was also no event or motion picked up within 15 minutes prior to my package being delivered. Seems after the person recognition update it started missing things. Screenshot_20190719-101308_Wyze|690x335

Before putting this in the #wishlist, a couple of things: 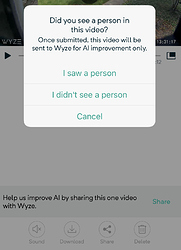 As I stated, there were no motion events at least 15 minutes prior to the carrier delivering the package.

Also, unable to share video of the carrier delivering because it didn’t create an event to suggest that a person be detected.

Sorry, I missed the 15 minute thing in your original post.

For the part about sharing the video… once you found it on the SD card, you can tap the Record button while it’s playing back to save the segment to your phone’s gallery and share it from there.

The green box is independent of the sensitivity and detection zone settings. So it’s possible that those settings are what prevented the event from being captured.

For problems with motion events not getting captured (outside of person detection), the way Wyze wants those reported is through the submission of Support Request. Depending on the nature of the problem, rather than use the website link, it is helpful to submit an App Log and/or a Firmware Log.

I didn’t even think to hit record. Going to do that now and submit it! Thank you!