With Phillips Hue’s progressive wake alarm clock being so expensive and aroma therapy clocks not being connected, it would be interesting to see what Wyze could make. It would fit around the direction of Wyze producing health related products, Wyze band and scale. I imagine a clock that would be connected via the Wyze system, that would have a screen and additional portion that would have color adjustable LEDs and a built in diffuser using water and oil or a heating element that would warm sent pellets. This would also allow Wyze to enter a field of purchasing refills for the sents. 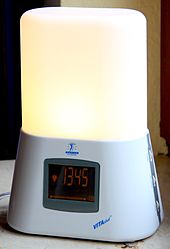 Dawn simulation is a technique that involves timing lights, often called wake up lights, sunrise alarm clock or natural light alarm clocks, in the bedroom to come on gradually, over a period of 30 minutes to 2 hours, before awakening to simulate dawn. The concept of dawn simulation was first patented in 1890 as "mechanical sunrise". Modern electronic units were patented in 1973. Variations and improvements seem to get patented every few years. Clinical trials were conducted by David Avery, MD, i...

Maybe with some audio functionality? syncs with the app.

Any interest? I would certainly buy one.

Simple functions, but with the ability to see Wyze (and other?) cameras on one larger than an iPhone screen. Also, configuration allows for a subset of news, sports, etc, that can be streamed free. Possibly a subscription for advanced features, like being able to make calls, control more devices, etc?

something akin to the Lenovo Smart Clock Essential would be absolutely fantastic. Nothing fancy, nothing over the top, just simple and well thought out functions.

Shop the Lenovo Smart Clock Essential. A 4 inch stylish smart clock with Google Assistant. It has a big & bold display & controls all your smart home devices.

I would love to see an LED color changing night light that has sound machine noises and a variable brightness clock/ alarm built in. It would be wonderful if it also had an option as a “sunrise light wake up” and was voice controlled as well as manual. A version with a camera could also be made as we have way to many of these individual devices on our baby and children’s dressers.
PLEASE SEARCH #wishlist and #roadmap and read the How to Use the Wishlist BEFORE POSTING.

Hatch products are in this space, but they are SO expensive, and the cheaper models utilize not-so-great bluebooth.

Literally, all it is is a speaker, led lighting, and possibly a display. Why does it cost $60 for the basic model or $120+ for the “adult” version of this.

Wyze could definitely create a $20 version that is wifi enabled!! It would sell out immediately.

I will say that after using the Lenovo Smart Clock for several months now, the only real feature I think it’s missing is a battery backup. It has a night light to it, large-ish numbers, day of the week, basic temp and weather display. I would not want a camera in it for use in a bedroom or near my work area.

The sunrise light could be useful, but it’s not one that I foresee using.

I think a good addition to Wyze’s home/lifestyle product lineup would be a smart alarm clock primarily for (but not limited to) use in bedrooms.

Also, there could be multiple models, a lower-cost, more basic one with fewer features and a fancier one that’s a little more expensive.