i would like to have a siri shortcut for turn motion off camera 1 for instance. i have an ifttt that turns on cam1 motion when i leave but there are dogs that move around and sometimes a person is still at the house. i have a widget to quickly do it from ifttt but no way to speak my request when i’m driving and the notifications are going off left and right…

Can you elaborate please? I have no idea how to implement what you are describing.

You can’t implement it. Wyze would have to do that in the app.

What you can do is set up shortcuts in the Wyze app to perform various functions. See this:

What @VdotN is suggesting is to make any Wyze shortcuts that a user has set up available to Apple’s iOS Siri Shortcuts:

Run shortcuts with Siri, the Shortcuts app, or Siri Suggestions

Shortcuts let you quickly do everyday tasks, and with the apps you use the most — all with just a tap or by asking Siri. Look for the Add to Siri button in your favorite apps or visit the Gallery in the Shortcuts app to add new shortcuts.

How are you getting this to work? When I ask, Siri thinks I’m saying WiFi, waze or wise. Please help, thanks.

I would love it if we could use the new Wyze Bulb with Siri shortcuts. This would basically replace the Siri support aspect of a HomeKit integration. Siri Shortcuts could also be used to view cameras. Commands could be, “Hey Siri, show me the garage” or “Hey Siri, turn on Kitchen lights. This would be great and it would be a lot easier to build than a Homekit integration.

I’d like to add Wyze Plug to something for which Siri Shortcuts would be great. My iDevices switch is perfect w/ Siri (although it’s due to HomeKit support), but as much as I want to buy Wyze Bulbs and plugs, I need some better iOS tie-ins. (Not interested in IFTTT for a few reasons.)

I dislike using IFTTT for a variety of reasons but so far it’s been surprisingly… fine. Since it’s the only option at this point I’ll take it.

Side note this could be an alternative option but would require some extra work and who knows if it will break in the future. 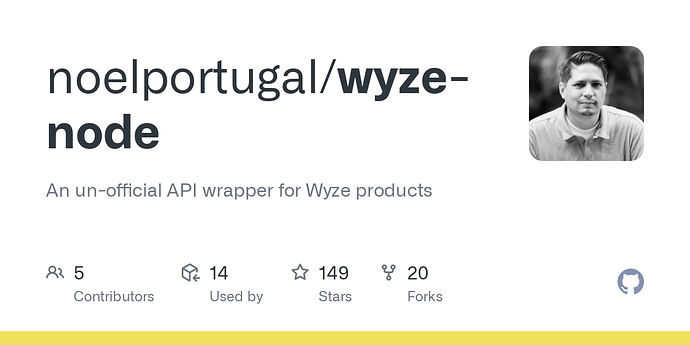 An un-official API wrapper for Wyze products. Contribute to noelportugal/wyze-node development by creating an account on GitHub.

Any updates on this? Since you’ve decided not to pursue homekit support the least you could do is give us shortcuts support. Im not sure what everyone else’s motivations were but the only real reason I wanted homekit support was so I could have motion detection enable and disable when I leave home/arrive home. I know I can do this in IFTTT but quite frankly, its terrible. I had maybe a 40% success rate at best where as homekit support (and one would assume shortcut support) for my hue lights is close to 99% success. Either way, I hope you reconsider this

Welcome back, @stevo81989! If the topic tag changes from “maybe-later” to “researching”, then you know it is on Wyze’s radar.

I need this so that my wife who is disabled can activate two way voice with an outdoor camera. Unfortunately, the Alexa app does not allow activation of audio and it does not appear that we can do it with Siri either. I would like to avoid the subscription model of Ring and others. Adding this would be a major factor in choosing to go with all Wyze devices.

My garage is a very tight fit. I set up a Wize cam so I can see just how close my car gets to the garage door opening on the passenger side. It would be awesome if I could use a Siri Shortcut to trigger the Wize app to show me that camera when I pull into my driveway. Maybe there is a way to do this with IFTT?

Basically a bump. I finally decided to try bulbs and plugs even though I wanted and needed some type of Siri support (Shortcuts or HomeKit). I like the devices, but not being able to tell Siri to turn a bulb/switch on or off really sucks. (Yes aware of IFTTT and no, not a fan of that solution.)

I’ve been using IFTTT with Siri Shortcuts using Webhooks. I have it automatically set up to turn on the camera when everyone leaves the home and turn it on when the first person comes home. And it’s worked 100% of the time for the past month. I wrote a quick tutorial on how to set it up here if anyone is interested.

I am one of Wyze’s biggest fans, but instead of new product, I would love it if it were simple to setup some type of voice control. I do use HomeKit switches, plugs, thermostats, etc… I think it was said earlier… I don’t necessarily HAVE to have HomeKit integration, but simple Siri integration isn’t as hard to accomplish. I can get Siri to launch “Wyze” but that’s about it…how many votes are needed to move this up on the priority ladder?

Kind of disappointed in how Wyze is allocating their resources. I can buy thermometers and face masks but over a year and a half later, I still can’t use Siri to open a camera feed.

Allowing Siri Shortcuts seems like a no brainer and should be relatively easy to implement. I use open source apps that are created and maintained by one developer that already have Siri Shortcut support.

It probably has something to do with licensing for Apple.

But HomeKit has Siri baked in, therefore if they had HomeKit support I could control with Siri commands.