That’s a great use for Apilio.io. I believe that you can do it with the sensors you have. The part I’m not sure is whether Wyze is publishing individual sensor states to IFTTT. (I sort of gave up on Wyze until they make some progress.)

Can we have simple boolean AND and OR for triggers and actions?

Title says it all. This would clean up my Rules a lot.

This is a must have.

The trigger I want already exists: IF contact sensor has been open for more than 1 minute, AND time is between 10pm and 7am.

The action that needs to be added is: Send notification of contact sensor status is Open.

That’s it. I just want to know if I forgot to close my garage before I got to bed.

As a bonus, I would like to be able to set notification priority levels, so this notification for example, would be higher priority than the global mute/unmute. I always want to know if I left my garage open, even if I forget to turn global notifications back on because I’m home for the day and got tired of being notified every time I open the back door to let the dog out.

The only other way I’ve thought of to accomplish this, sort of, is to turn a light on as a visual flag that I left the garage door open. But, that’s not really effective when the light is very often when the event trigger would occur. If Wyze came out with a colored bulb and I the action would be to turn on a bulb AND set it to ‘red’, then I could work with that, may even be a better reminder than a push notification. But the push notification as an action seems like it would be a simple software update away.

100% agree. That’s my exact use case and had the same thought with the light too.

I am looking for something similar – Here is what I currently do:

The above works great. However, I also Use Alexa and when we go to bed, I tell Alexa Good night - which turns off all lights and sets the notifications on. I would like a Wyze conditional trigger as follows:

If the Garage Door is open (Identified by another Wyze Product Like a Contact Sensor or outlet) then trigger the outlet as described above. If it is closed then do not trigger the outlet. If I could do something like this, then I could put something together to close the Garage door at night when I go to bed (if it is open). Otherwise it will stay closed.

Basically I am looking for an IF THEN ELSE Option as Identified in a previous writeup.

This thread was started one year ago. Why has Wyze still not made any progress towards implementing this?

Currently only ONE Device Trigger can be specified.
For example:
When ONE Motion Sensor Trigger is clear Do turn off Bulb(s).

I would like to do this:
When TWO Motion Sensor Triggers are clear Do turn off Bulb(s).

First time posting here so I hope I’m in the right forum, but anyways…I currently have my bedroom set up so that if I open my door between certain hours the lights turn on. I work different hours sometimes so if I wake up in the middle of the night to go to the bathroom my lights will turn on (which I don’t want bc they are bright). I also sleep with a fan on every night using a Wyze plug to turn it on/off. I really wish in the rules we were able to set a command that if a door sensor opens turn the lights on but only if the fan is off. Maybe one day we will get this! Maybe I’m the only one that would find this useful lol.

Also would love this! Like to automatically turn my bulbs on at a certain time in the morning. I have to setup multiple rules for each bulb and a different rule to change the brightness.

Would be great to “stack” different actions within one rule.

I would like to create a rule that says if anyone of my outside door sensors are triggered in the middle of the night, turn on all lights. Currently I would need to create 5 or six different rules to accomplish this plus an equal number to turn the light off again.

It would be nice to have MULTIPLE triggers for Rules and Conditional Triggers.

Example: 3 Motion sensors in my basement, if ANY of them detect motion, turn on my lights. (Instead of 3 different rules for each motion sensor)

Example: If Living Room motion sensor detects motion AND my Light Strip behind my TV, and the one giving mood light under my couch are OFF, THEN the Main Light in the living room turns on. Otherwise, it won’t turn on the Main Light if any or all of the light strips are on.

^^^^ These styles of rules/automations were easy to do in Smartthings. I hope Wyze gets on board with mult. Trigger rules and Conditional rules. It is getting increasingly hard to organize and keep track with all these basic rules.

[Mod Note]: Your request was moved to this topic for consistency in grouping similar requests. Remember to scroll up to the top and click the VOTE button.

It is getting increasingly hard to organize and keep track with all these basic rules.

I open the Wyze App, and the FIRST thing i see is “Try Rules”… yet, Rules are one of the items in the app that need the most improvement by Wyze.

I find the rules to be quite a challenge to use to the point that I have started to experiment with the Amazon Routines on my Alexa to see if I can achieve what I need to there instead of the rules in Wyze. (I had a need to turn on a non Wyze Light Bulb with a Wyze Entry Sensor, and realized that I need to compare the two methods (Wyze vs. Alexa) for accomplishing what each desired rule (or Alexa Routine) 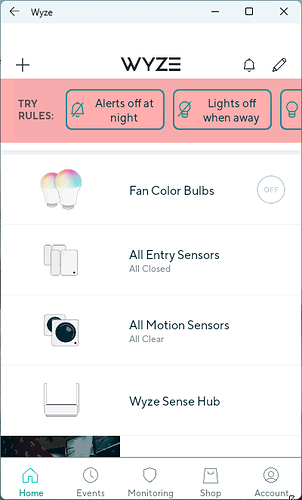 I agree! Right now, Wyze is the only cheap home monitoring system that does ‘safety and security’ plus automations (rules) with different sensors that has connect with their lights, flood, temperature in 1 ecosystem. I don’t even use their cams other than a v3 to watch time lapses on my 3d printer. My cams are all Google nest, and I had the Nest Secure before that got canceled. There’s always Ring system but I’m not sure how or if that will work with Google cams, thermostat, fire/CO2, etc. I just like the idea of 1 reliable and trustworthy ecosystem for everything smart in my house… is that so hard to ask for?

This is exactly what we need so bad and I don’t understand why it would be so difficult to deliver, it’s just more of the same.

I agree this is really the crux of this thread because today we already have multiple actions but so much power with no real ability to control it (multiple conditions) goes completely against Uncle Ben’s wisdom (not very Wyze).

I need the ability to trigger from multiple device conditions. If the door #1 is open AND door #2 is closed but there is no motion in room then lock door #1 (and perhaps only within certain time range). Smarter rules for the smartest devices. If Wyze can deliver they will begin to demonstrate a major distinction in their ecosystem.

I just spent the better part of the evening recreating the exact same multi-action rule for 16 different trigger cams.

By the end, I was going cross eyed trying to make sure I got them all the same.

This could have been accomplished with 1 rule and 16 “OR” triggers, not 16 seperate rules all with identical actions.

Allow AND in rules

Please allow the ability to have multiple device triggers for an action. IF the temperature is blow 65 degrees AND motion is detected DO turn on plug IF time is between 7am-4pm.

In the rule creation process, we really need OR-IF functionality where IF one of several events occurs, a desired action will take place.

Additionally, WYZE seems to be a little flaky with timing. I can’t say between 9pm-5am because it doesn’t work. I have to say between 9pm-1159pm then add another rule that says between 1200am-500am

The total rules for night time monitoring of 5 cameras becomes this:

Now unless I am missing something, OR-IF logic capability in the rules could reduce this all down to 1 rule.