In the Pan they put 940nm in, the lower wave length means less people have sensitive enough eyes to see the light so it is more concealable. A side effect of this was needing the additional 2 IRs to make up for the reduces power which is also why the Pan has 6 IRs instead of the 4 the V2 has.

And there’s Rick with the explanation.

So we know both wavelengths will work and the question becomes, does one attract bugs more than the other? And, will putting the light source some distance away from the camera cut down on the bug triggered false alarms?

I’m not an optics physicist, but my guess would be more absorption of that wavelength by the air molecules. Let us know what you learn.

Well, here is a study where they used 940nm light to study insects reaction to light at shorter wavelengths.

“In none of these previous studies was light of wavelengths >700 nm used, probably because of the pre-conception that insects are blind in this wavelength region. However, as we have shown here, leafhoppers can indeed detect near IR light (~740 nm) and are clearly attracted to the light source. Consequently, near IR sensitivity may be found to be widespread among insects.”

I would think the longer the wavelength, the better, but there is certainly a trade-off as was seen in using the extra lamps in the Pan camera. Not to mention finding lower priced options with the 850nm vs 940nm lamps. As for the bug issue, I wonder if the 850nm is just enough to attract them to the source without having another alternative. It’s hard to believe, with the number of events overnight, these fly-bys are random. I may try using a standard LED nightlight as bait to draw any nearby bugs away from the camera, just as a test. In any case, putting the light source, 850nm or 940nm, some distance from the lens should help. 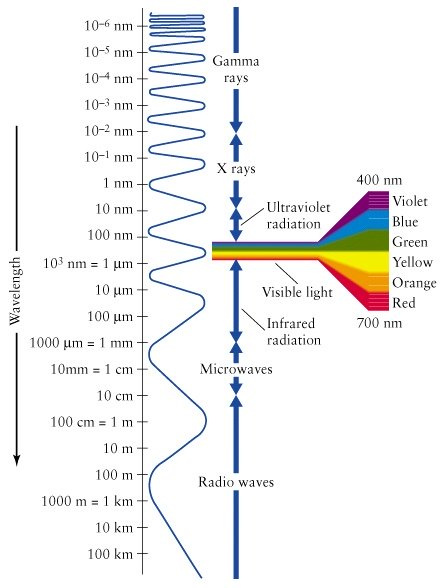 Something I didn’t see mentioned here amongst all the cool science stuff - BTW, we have an impressive community of user, don’t we? - is that you should do some heavy reading of reviews and make sure that whatever IR source you buy has a quality power source. Cheap unregulated power supplies will dramatically decrease the life of IR LEDs. Took me two IR illuminator setups before I figured this out.

Everything looks great at first but over a few weeks to a few months, you’ll start to see a decrease and then LEDs will start to die off. Do some research before you buy!

I was surprised to see so many IR lamps sold without the power supply. I did see some reviews where people had used some that were probably under power for the lamps.

Another thread on extended IR lights.

So I have no affiliation with the product nor the company but I bought one to test and was so pleased I bought a few more. The Wyze cameras have great capability for night-vision but operate in a less than mainstream wavelength. I found some lights that barely emit any phantom glowing red on a random Amazon fishing expedition . They illuminate out to 50 yards with no issue and the only flaw seems to be they ship w/o a power supply lol. Here are some images with NO visible lights on outside. Th…

Here’s what I’m testing and some initial results:

Comes with a power supply, not the brightest of the three, but adequate illumination.
https://www.amazon.com/Tendelux-Illuminator-AI4-Infrared-Security/dp/B075ZYG89D

These are just my opinions, YMMV. All of these lights were surprisingly bright when viewed on live stream. The main difference I saw was the spread of the light. One thing to think about is not pointing the light at the ground or objects if you can avoid it. That’s where you’ll see the hot spot effect. Where you mount it will make a big difference. 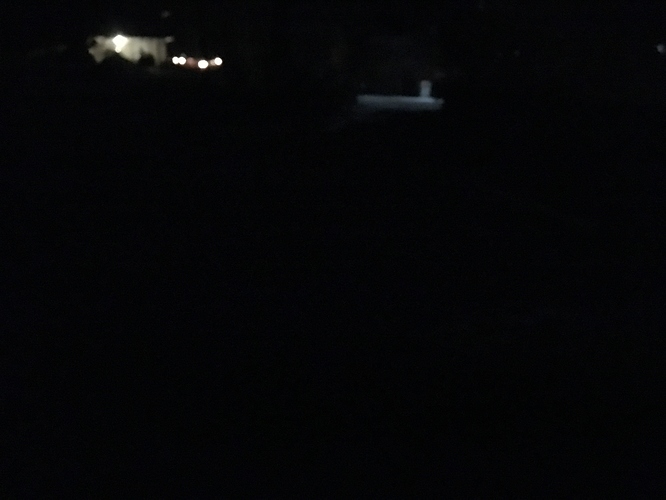 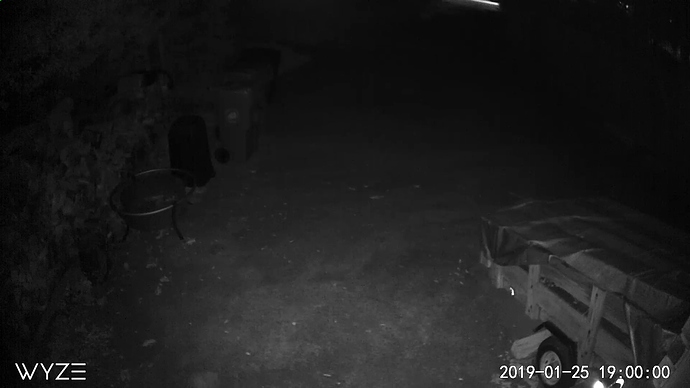 Above light & Onboard IR 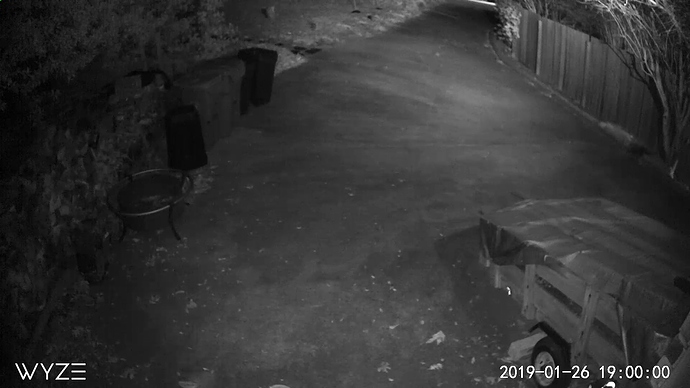 Sure wish I had this up a couple nights ago.

Before: Was a little worried about reflection off the shingles. 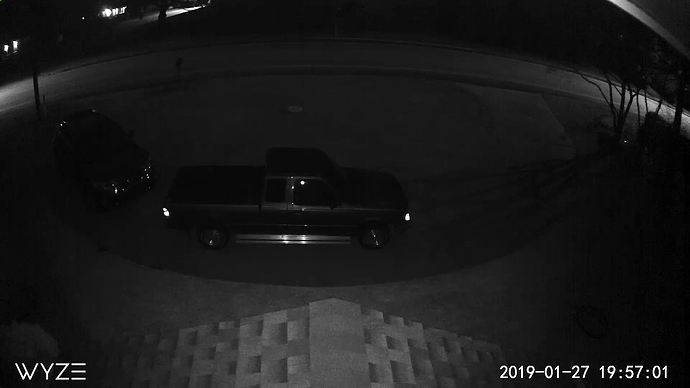 After: Getting a little reflection off the eaves, far left and right. 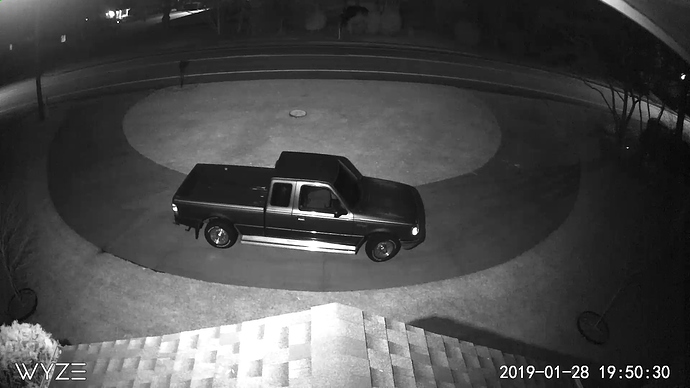 Thanks for posting and sharing the link! I wasn’t too sure on just a 6 led ir light for my backyard but am now convinced that I’ll be fine with that purchase, thanks to you!!

As a bonus, it is actually cutting down on my headlight false alarms. So much so, I’m thinking of moving this one to the corner of my house and adding another to balance it out.

How visible/noticeable to the naked eye are these when viewed from the street in the dark?

That is great info on those before and after, with and without photos and we definitely intend to get some of these lights since we have already been looking into external IR lights and specifically those 6 LED model IR flood lights. I think we want people to know they’re under the microscope and not safe under cover of darkness. If they don’t know the light source is there, they are less like to see it as a deterrent, since they can’t see it. Finding out when you wake up and see an event and catch it on camera is not really the way we want to learn about the incident. Prevention is more what we are after rather than finding out after the fact. An ounce of prevention is worth a pound of obscure.

Hardly noticeable. If you’re looking for it, yes you’ll see it, but otherwise it’s not there. The grey round 4 LED lamp probably has more bleed over into the visible spectrum than the six LED. As for bugs, the flying kind, I think most false alarms from them are incidental and I’ll wait until v2.1 comes out and I can turn off the onboard lights before I expect improvement in that area.

I’ll wait until v2.1 comes out

As I understand it, the software in beta test is version 2.1, which allows onboard IR to be turned off.

yep, 2.0.21 is what we are using now
okay, thanx for that little tid-bit
double tape is what it took to cover the IR LED’s here
the app turning them off will be nice

With the rollout of v2.1.32, where you can turn off the internal IR lights, I’m happy to report for the first time I didn’t have any insect related notices triggered. Using the separate IR lights listed above, I still have plenty of light to see what’s going on. A huge improvement over the onboard lights, which are designed for indoor use, as is the camera. On one of the cameras, turning off the lights is nearly impossible to notice, because it pales in comparison to the external lamp. On the side camera, it is more noticeable, but because of the layout, all approaches are covered by the external IR lamp. Same situation with the third camera, which I never posted pics of. I may get around to adding pics with just the external IR lights, but now I’m pleased with the ability to turn off the onboard lights and the additional illumination from the above listed IR lamps.

As for the insects, I believe the fly-byes were incidental and not an ‘attracted to the light’ issue mainly because of their flight path. I don’t recall any flying directly at the light source, just close enough in front of it to get ‘lit-up’ and glow like a torch. We don’t get much snow here, but I think the separate IR source without the onboard lights would work the same for eliminating those false alarms. I expect this will also eliminate the fog/drizzle (looks like thousands of gnats attacking your camera) false alarms too. @WyzeGwendolyn please pass along a big ‘Thank you’ to the team.

Does it matter if I use a 940nm or 850nm external IR light-source for the pan? I know the pan uses a 940 vs 850…but will the pan pick up both wavelengths? It appears 850nm lights are a lot easier to source.

Sorry, @Skier76, I don’t know the answer to that one. I’m not familiar enough with the hardware.