I have a V2 camera that was outside under a overhang. The picture was getting cloudy, something with the lens I assume so I had to leave it in night vision mode all the time to see a fairly clear image. I decided to replace it and use it somewhere else on another wifi. I deleted it and trying to add it again on another wifi, but it won’t read the QR code. I am assuming it won’t read because of the fuzzy image, the lens or something is messed up. Is there any way to use it without reading a QR code?

Is the full QR code visible? Sometimes you have to scroll up on the QR code page to make the full thing visible. Are you able to post an image of the cloudyness? Do you think your problem is similar to this:

The QR code is visible. I can’t post a image of the cloudyness because I kept it on night vision all the time because the image was too fuzzy in color. I do notice that the ir lights are on when I try to read the QR code.
Are they suppose to be on in setup mode?
If I would not have deleted it to put on a different wifi it would be OK.
It has been outside for a few years. I’ll tear it apart and see if I can see anything. For $25 I have got my use out of it.

I’ll tear it apart and see if I can see anything.

The thread that @Omgitstony posted the link to is incredibly thorough with many explanatory pictures.

Definitely worth a look see if you have the inclination and some small screwdrivers. No telling what got into that cam after two years outdoors.

the ir lights are on when I try to read the QR code.

Just double checked, and the IR lights are NOT on when reading the QR code. Also tried scanning the QR code with the protective film still on a new cam - didn’t go well.

One thing you can do that probably wouldn’t hurt at this point is to try reflashing the firmware. It might clear the IR lights issues.

If you try to save it, these two threads also discuss camera lens focusing

While reading posts I discovered this tidbit… After removing the boards inside the V2 case to replace the lens, pop out the black lense cover on the front of the now empty case (easy to put back in) to enable you to easily refocus the replaced camera lens… When focused properly, replace the lens cover by popping it back in.

Fyi, for a wider angle, the lens in this camera is replaceable fairly easily with some modifications and voiding of the warranty. The following lens threaded right in and increased the FOV substantially. https://www.amazon.com/gp/product/B07FXF9Y1V/ref=ppx_yo_dt_b_asin_title_o03_s01?ie=UTF8&psc=1

Shouldn’t have to go through this much to reconnect after a password change. All cams are still in your app. So there should be a way in settings to change the wifi password without having to remove all the cameras from where they are mounted & rescan them! Terrible!
This is supposed to be an easy to use cam and not everyone would even try some of the things mentioned above like lens changing…

Dirty lens was the problem. Thanks for the help. 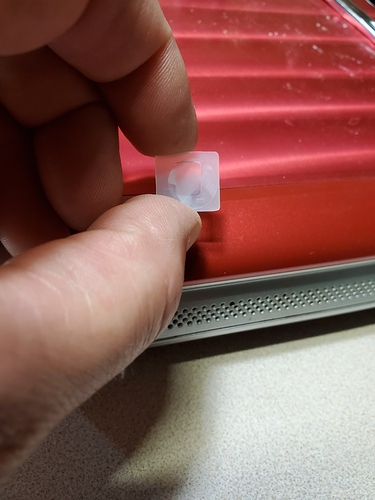 Nice work! Were you able to clean it (alcohol I suppose) and get things back to normal?

Just a dry microfiber cloth, and my shirt. It works great now. Wish I would have known about the lens a long time ago.