I been testing portable power for outside, Raspberry Pi UPS, I added an extra 5000mah for a total 8800mah, I’m testing how long it runs and if I have enough solar to charge fully. It’s a 27watt flex mono panel with a USB out 5.04v and 2.1a out so about 11 watts continuous for 4-6 hrs should be enough to run and charge. 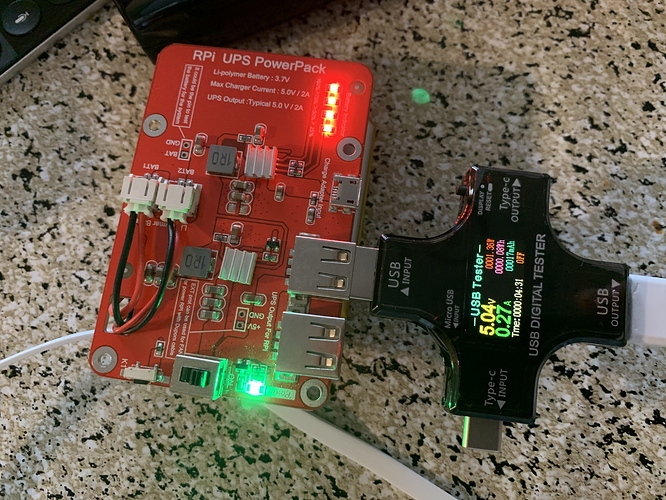 Can you provides links to the parts in case someone wants to try to duplicate this?

Sure everything can be found on Amazon: Raspberry Pi UPS Amazon.com

This module can have an add on battery, I put a 5000mAh double tape to the 3800 that comes with it.
Battery: Amazon.com

Right now I am testing the capacity and how long the camera will last on 8800mAh of battery, but I hope this solar panel will charge the batteries daily enough to cycle for a long time.
Solar Panel: Amazon.com

Currently its been running 18hrs with no solar strictly on battery, that’s way beyond expected time.

As for a sealed container for the Raspberry Pi I got a food container at Walmart that has a lid seal and just melted 2 USB size holes and plug it all in and put rubber putty around the holes to semi seal it.

I would be happy to provide more pictures or any help. Just let me know.

Thanks for those extra details! In my opinion, this is the simplest solar solution I’ve seen to date.

I am a big lithium 18650 person and I have thousands of them, I found it super difficult to find a PCB/powerbank that would allow incoming charge and outgoing power also I would like to use 18650’s for my work cameras but these were test units for my house. . Here is another one I use MIFI7830L hotspot that’s last years model has an out USB-A and a in USB-C and will do passthrough and provide wifi… I been using it in our shop for a few cameras I move around.

Wow, that’s really cool. I’m going to look into this.

So after testing several flex panels with a USB connection I found that they all limited the charge amps which the raspberry pi could not get charge enough, I did find that these same 27watt and 40 watt flex panels have the ability to connect to a small charge controller and it has 2 USB outputs on it. Tis charges the 6x18650’s I have in 3s2p configuration/ its approx 13,000mAh and its fully charged by noon so its making plenty of power its just being limited by the USB it comes with.

Looking at trying this to replace an eufycam, have you managed to try this as a system yet or only discharge & charge?
Any recommendations for a rigid panel & charger controller / usb output?

How much power does the pass thru draw? I’ll be using 18650’s…will the charger support 3? Thanks

I am using a lithium charge controller I spent about $30 on and have them configure in a 3s2p however during the winter months that’s not enough nor is the 50 watt panel to sustain the power. Once March came I was able to put the camera back in its place and charge cycle it day after day. The cold killed them very quick besides that issue it works well.