Early hours of Feb 16, 2022 my V3 cams bricked solid. Only updates bricked them in the past so with the skill of a surgeon I’ve avoided tapping anything related to them. Now a phantom bricker.

There were forced updates this month even if, like me, you had spent 3 years conscientiously avoiding them at every turn. They bricked one of my V2 cameras too.

There were forced updates this month

Main reason I switched to the RTSP firmware.

Insane they would start forced updates knowing updates=bricks for so many! Thanks, I was asleep so it was a mystery.

Thanks, I’m definitely going to have to look into switching to rtsp.

I don’t even have words. Have tried multiple replacements for this Feb 16th auto update cam bricker and now have the unusual problem of none of them will scan the QR. I mean over 20 hours doing everything but getting a new phone…same phone that scanned every other cam for years and practically only needed to be in the same room for it to happen. Looks like I’ve lost all my v3s and it’s pretty devastating coz starlight sensor is invaluable around here. Have to start thread now seeking some big time ingenuity.

Apparently Wyze has decided to ignore helping get V3s back up and running. They sent replacements that will not scan QR codes after every possible attempt including removing phone screen protector to expose pristine glass. After a week no further response since cust service said they’ll fwd to their mngr.

Really need these V3s to work and can understand not replacing again I guess, but to just leave it up in the air without an offer of refund or anything is unacceptable.

Anyone wondered if cams being knocked offline/bricked and sending replacements that won’t reconnect is related to whether an account has signed up for their new request to pay for recordings or not?

Have you tried the following:

Make sure QR code is fully visible on the phone.
Try a different phone.
Print the QR code and scan that.
Cast the QR code to your tv or monitor and have the camera scan that.
Another suggestion from a similar post, move the phone 8 to 10 inches from the camera.

Sorry for the delay, was out of town. Yes I’ve put the QR code on other devices within the 5-minutes. A laptop and smart TV, don’t have a second phone. Cropped a screenshot of QR code that’s clearly on the screen. It doesn’t change size if I mini font. Funny thing, my phone screen showing QR looks exactly like the old Wyze YouTube vid instructing how to scan the code…so it should work.

Will attch a screenshot. Got an email today now asking all the cams be returned because it says “we need to ensure that our products being sent to you are experiencing known issues.” Sounds like they want to confirm issues they already know about. And essentially saying no further assistance to get them connected is available. I could do the connection process in my sleep after repeating it countless times and working far longer and harder for these products for various reasons than anything in my life.

Currently the V3s click after a minute of staring at the QR code whether I prop them both perfectly aligned at various inches apart or hold them in my hand. Can’t believe this has happened, as a disabled vet we really need the starlight sensors. I’ve heard there’s another company that handles the cam to phone connections but no one can say if they’ve had issues lately. These cams have liked QR codes on my phone for 2 years so pretty convinced it’s a defect in the cams they’ve sent. Thx again. 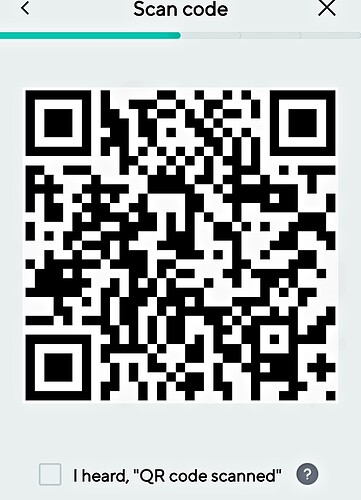 SOLVED. The issue is in the replacement cams. Almost two months of back and forth cams and none of the ‘replacements’ could read a QR code. Exhausted by countless tips and tricks suggested to change things on my end, decided to buy a V3 in a store. Instantly this store-bought V3 connected today and in under 10 secs said ‘set up complete’. Afterwards I tried setting up the last replacement cam sent again.
Absolutely nothing was changed to set up the store-bought or retrying the replacement including where I was sitting. As usual the replacement cam could only click and never say QR code scanned. The store-bought cam was connected under the most basic process, picking up phone and cam instantly said ‘QR code scanned’. None of this was ever my phone screen, lighting, connection, etc’s fault, none of that!

Waddeya wanna bet that your replacements were recycles?

Ha! Wouldn’t bet a dime since I was told if they shipped from where they did they were refurbished. The cost of it all like troubleshooting with CS, shipping, not to mention the big toll on customers doesn’t seem worth trying to recycle them. Third time I asked please confirm the cams would scan QRs before sending but apparently they didn’t. So much time and effort put in to connecting replacements tryin to do my part and it was all futile. And still have to deal with requesting a refund for originals because for reasons we can only speculate, connectable replacements won’t be sent. Unbelievable.

Extremely upsetting so far. Long arduous CS conversation short, I asked for a refund yesterday of original cams since they’re clearly unlikely to send operable replacements on a 4th try. It costs $50 more for me to repurchase/replace them from a brick and mortar due to the increased price of three V3s yet this time I got questions like, are these cameras connected now. I say never once, you can access my account or whatever you need but don’t think I’m playing. Was told conflicting things from prior instructions that will cost me even more time and effort and guaranteed she would email a return shipping label, (second time I’ve asked for one), but she emails a return policy. I reply to it since she asked me to but couldn’t tell me what to reply so I recapped the problem and really don’t expect a response.

Tremendous effort to do the right thing and it’s like it doesn’t matter one iota how much or how long the customer has to work resolving problems they didn’t create. I lived in the Philippines and total English fluency like understanding humor, word plays and puns is very unlikely. It’s equally tortuous finding different ways for us to try to explain a problem and it’d be the same if roles were reversed. If I hear nothing else it’s almost cruelty to go back to square one again and try to re-explain to yet another csr. Esp since it appears they can’t make refund decisions anyway. So, is there any possible way left on earth to talk to someone at stateside Wyze?

Wyze has definitely made some poor decisions in their choice of outsourcing CS. I have not seen very many positive experiences in the forums. If I was in that situation, I would be searching forum users from the Wyze Team who are active here and @ tagging them to get some help. I know 2 of the cofounders are listed too.

Thanks Slab, taggings might work. Sorry for the delay, was waiting for what happens next. It’s a lot to write out when things become a bit of a quagmire but the good news is an email with a shipping label was sent yest from yet another person. Wouldn’t it be nice to have one rep see an issue through? It says they have sent a return label before and are resending the email again with it attached. Well that resent email was from last month which was quickly followed by another saying no need to return the last replacements. Then another set of replacements that wouldn’t scan QRs was sent so I requested return label for those a couple times last week. Evidently I coulda-shoulda gone back and used the one from weeks ago? Oy.

Seems very unlikely they’ll send connectable cams on a fourth try so asking for a refund to help repurchase them. Turns out everything ever sent must be returned for refunds so if replacements don’t work and you’re told no need to return them, hang on because you will if they never work and you have no choice but to request a refund of your original purchase. Would love the tiring hours spent on this back since they phantom bricked on Feb 16th. Thanks again.

Decided since the store bought V3 connected so easily and an update for outdoor base went fine today, to hit update in the app for my new store-bought V3. Now IT’S a BRICK!

Was going to ask the store to exchange it tomorrow but just read they actually DID force an update despite knowing they can brick cams in Feb which no doubt killed the three V3s starting this nightmare. So if they’re going to force brick new ones without latest firmware I can’t even own V3s anymore! And they’re almost $40 with tax now, no longer a cheap product to simply repurchase. Especially when their own firmware breaks them! Absolutely unbelievable.

I gotta be done now and V3s we’re so invaluable to us.