Has anyone else noticed a slow but steady decline in your Pan Cam’s night vision picture? I wish I had a shot from a couple of months ago, but this camera used to have a crisp, detailed image. If you look at my screenshot, you can see how it’s gone from somewhat bright (yet very hazy) to very dark. The camera settings and ambient light are the same. This camera was activated on 5/20/2000. I don’t have a ‘before’ pic for the second instance, but I can assure you the door in the back used to be very bright. You can see the ‘depth’ of the IR on the floor,… Thoughts?’’ 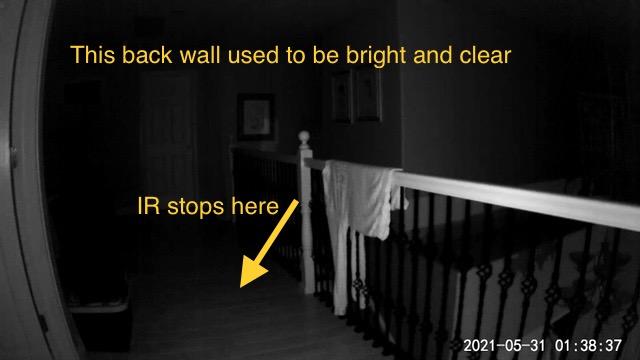 Did you have any other devices in the area that putout IR in the past and removed them ?

Great thought, but no…

The fog you see in an image when night vision is active is typically caused by something to the sides of the camera reflecting the IR light back across the front of the camera. You never see that sort of reflector in the camera view, except via the fog effect. This can be something as small as a tiny forward fin that extends past the front of the camera on a camera enclosure, to a nearby wall close to the cam on the right or left. The typical fix is to move the camera further from the side-reflective surface(s), or cover the side-reflective surface(s) (like enclosure fins) in something that doesn’t reflect IR light, like black electrical tape.

On the reduction in distance, that typically happens when there is a forward surface reflecting light back to the front of the camera. This surface you will be able to see in the camera view. That bright item causes the IR lights to reduce their brilliance to tone down the reflection, which hurts distance. The solution to that is to try to eliminate anything white in the images, like the rail and the reflective item draped over the rail in the bottom picture. Sometimes that requires reorientation of the camera so the reflective item is not in view, like moving the bottom camera closer to the base of the stairs, or the upper camera more to the left so the rail and wall segment next to the rail are not in the picture. Sometimes it just requires removing the reflective item from the view, like the item draped over the rail in the bottom picture.

Thanks for taking the time to reply is such detail!!