First off, you should vote for your own Roadmap.

Don’t want to toot my own horn…

I think you got it. As of today I can record continuously, but no motion events are “marked” in the timeline. For that reason I set my configuration to record on motion. Now each recording may be of value since motion was detected, but I really only want notification (from the app) if that motion was within a “sub zone” of that motion detection zone. E.g. car pulling into my driveway or someone walking up to my porch vs. just a car driving by.

I could simply set the motion detection zone to ignore the street, but I would like the ability to capture any car stopping in front of my house (aka. casing the place)

That would be useful for me also so I can just set it to have the notification pushed to my phone if only someone walks up my stairs to my apartment rather then just walking past on the sidewalk.

Maybe my use case is not the typical use case for this (judging by the lack of votes). Since my camera is outside and facing slightly downward, my porch and driveway could easily be drawn as a different zone than my sidewalk or street. On a side note, I live in the Michigan and the camera withstood the the -16 degree temperature (-35 windchill) with no interruptions. Pretty impressed.

I think you got it. As of today I can record continuously, but no motion events are “marked” in the timeline. For that reason I set my configuration to record on motion. Now each recording may be of value since motion was detected, but I really only want notification (from the app) if that motion was within a “sub zone” of that motion detection zone. E.g. car pulling into my driveway or someone walking up to my porch vs. just a car driving by.

It might be tricky, but if you position the camera to where a car pulling up to the curb and stopping in front of your house is in the camera view, event only recording should get triggered. Then set your detection zone to cover your driveway and sidewalk. I have a similar issue because the street is straight, although curved in the lens view (wide angle) and the detection zone is rectangular. I end up not covering a large section of my yard.

I’d like to record all motion and sounds captured, but only be alert to motion in the detection zone. Is that an option?

I thought that is how the alerts are set up. did you change your alert zone / detection zone under detection settings?

If you have an SD card won’t continuous recording solve this?

Originally SD recordings used the entire screen regardless of the detection zone, but at some point the SD card recordings changed and only used the detection zone just like the alerts. I’d recommend making a request on the roadmap section of the site so that users have the choice between the two. You could record continuously as well, and use the alert to point you to the time where there was motion (searching through continuous recordings can be tedious.)

This is the #roadmap section, so please scroll up to the top and click the VOTE button.

That said, you can set the local SD card recording to continuous and then everything will be recorded regardless of the detection zone or motion detection at all.

Why? I don’t want continuous recording, for my sake and for Wyze’s sake, I just want a 14 second clip when there is motion.

This isn’t about continuous recording, it’s about selective alerts based on the detection zone. IE - Alert on detection zone, or alert on entire screen. It’s a checkbox in my mind

I’ve edited the title to just capture the need for “selective alerts”.

A post was merged into an existing topic: Greater Control Over Detection Zone Shape

I have a sunshade hanging at my back door. When the wind blows, the shade moves, thus triggering an event.

I want more than just person detection on.

I know there is a feature where you block an area only for triggering. That doent work in my situation.

Id like to define an area in the image that will not trigger a motion detection (masked area).

I have an idea that I’d love to see implemented. Currently, at least how I understand it, I get notified every time something moves in the detection box. I would like to see two boxes if possible. A detection box for all events, and one just for notification. Just to explain a bit more, one of my cameras points over my driveway/ half into the street. Currently my dectection box is over my driveway. But if I want to see what cars drove past I have to manually scrub through time. I’d like to only get a notification if someone comes in my driveway but I’d like all motion to be saved in the events tab.

Add a “notification area” (similar to the existing “detection area” feature). While I want all events in my yard recorded, I only need a push notification if someone is approaching the house (smaller area of the frame)

Can we create a second zone for cameras? A notification zone and a record zone?
For example, I want to record movement in my driveway, especially at the end, but I only need to be notified about movements that are up close. 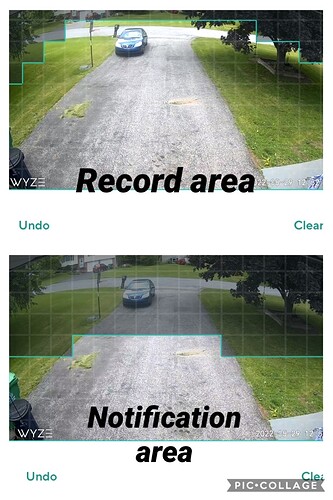