Hi Rain sorry for replying so late. NO there is NO NAS support sadly!. yes I know i own 6 NAS devices. With Wyze cams the only way to get the footage off the device is to physically remove the card!!! total buzz kill i know. i hope somewhere down the line they either let you do the following hook up a 2tb drive to the camera beats chasing 32gb every 3 days or 64gb… just have 1tb storage sdxc capable is more relieving till the nas part settles in

This is necessary to use as a security camera, or assurance that s3 recordings can be retrieved if the camera is offline (or stolen

Just an FYI - Saw this on reddit. Don’t put too much stock in it since the person who’s done this seems reluctant to just say what he’s done. https://www.reddit.com/r/wyzecam/comments/c3msvg/really_big_sd_card/

With Wyze cams the only way to get the footage off the device is to physically remove the card!!!

That’s not quite accurate. While playing back the video on the card in the Wyze app (View Playback), you can hit the Record button which will save the recording, in real time, to your phone’s album. It’s not very convenient since it can only be done in real time, but this method does let you get segments off the SD card without removing it.

There is a #wishlist topic about being able to download directly off the card. You can vote for that here: Direct access to SD card with download ability. Be sure to click the VOTE button at the top for your vote to count.

I’m not particularly techy (at least not IT-techy), but I plan to just hook an external hard drive to my router’s USB port. The router is designed with 2 USB ports for hooking up storage (flash drive or external hard drive) that you can access with any device that is on the Wi-Fi network. I’m sure the router lets you modify who has access, but I will not bother customizing. My cameras are all external facing or garage monitoring, so I have no privacy concerns there. I’m hoping the NAS solution(s) your software developers opt to support would include this (i.e. external hard drive connected to router), as it seems very common with today’s routers and presents a simple 90% solution.

Maybe I’m just still peeved about the fallout between Wyze and their would be NAS partner, but why all the hype for Person Detection?

Don’t get me wrong, it’s a wonderful and welcomed feature. But it’s a security feature in a camera that’s, current;y, not meant for security.

Wyze camera’s in their current state are not security cameras.

Without NAS and/or 24/7 Cloud support, these camera’s are just cameras with smart features.

Now I get the reason why Wyze is taking so long with NAS support is that they would like to bring their own NAS to the market before making the cameras compatible with other NAS devices and that does make sense at a business level.

For one: Why bring a NAS device to the market when there’s tons of other NAS devices out in that market?

Two: The NAS market isn’t exactly growing nor is it big so why bother?

Three: I’m going to guess that most people who buy these cameras are people in the tech/gadget community who most likely already have a NAS device or would rather choose one with specific features that help them with all their tech needs?

Again, why bring harm to your already beloved products by sitting on this issue for the sake of bringing your own NAS to the market which is tiny. Why not focus on more smart home devices because that is a market that is growing and the market that Wyze should really set it’s sights on?

I would love to buy all-in on the Wyze cams. I really would. I’d have at least 8 of them with room for growth, but without NAS and/or 24/7 cloud support, I’ll have no other choice but to go elsewhere for security cameras like the Arlo/Eufy cameras.

I just feel like Wyze is doing more harm to their business than necessary for a product that hardly anyone will buy.

NAS support, at the very least, should be one of your top priorities right now.

It looks like there are several Apps for the QNAP NAS system that support IP cameras / RTSP.

One of their top priorities? Lol, I would guess NAS support would only be utilized by a very small fraction of their customer based.

I don’t understand the need to rant about a feature you desire. Wyze is going to invest their resources on what they feel will be most beneficial. You know you can use RTSP as a solution for NAS?

Sorry about the MaxDrive being cancelled; but I think it will still be a good feature to support NAS. As far as I know we could use the RTSP firmware for this, but I think its mostly supported by branded NAS, so it would be also good if CIFS/Samba and NFS will be supported for those who already have personal server or WiFi router where you can plug a USB hard drive to.

I have a Synology DS NAS, which does support RTSP.

Synology has a lot of integrations and features (you can even run OpenHab home automation on it). I would think it would be pretty easy to get Wyze to talk to Synology NAS systems.

Qnap uses a service called QVR which is agnostic to brand and typically will accept any feed provided by an IP camera using the universal standard ONVIF protocol.

Would love to learn more about the NAS video drive.

So, unfortunately, I am aware that the first-party NAS drive solution was canceled, but are there any updates on NAS support for the Wyze Family of cameras in general? Thanks

Would a RaspberryPi NAS be an option?

Water sensor would be SUPER easy to make.

Inside of WYZE contact sensor there is a reed switch that could be replaced with two exposed wire contacts into a small sponge … when sponge gets wet, closes electrical circuit, and notifies WYZE app of water leakage. 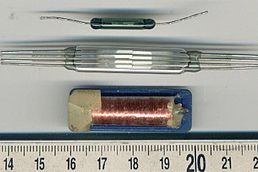 The reed switch[i] is an electromechanical switch operated by an applied magnetic field. It was invented in 1922 by professor Valentin Kovalenkov at Leningrad Electrotechnical University, and later evolved at Bell Telephone Laboratories in 1936 by Walter B. Ellwood into the reed relay. In its simplest and most common form, it consists of a pair of ferromagnetic flexible metal contacts in a hermetically sealed glass envelope. The contacts are usually normally open, closing when a magnetic fi

I agree - lets get an update on the NAS - to me a key feature. I’d like to stream recording to it. Thanks