Thanks for giving us some hope, @WyzeMike - I’m a new customer and find it hard to believe that a smart bulb can’t do these types of things here in 2022. I’ll hold off returning my Wyze color bulbs.

I would LOVE to have a feature where the light strip pro could fade or “breath” between colors without having to be in Music mode. Sometimes I don’t have music on and it would nice to have the strip be able to fade between all the colors.

This seems simple enough to add and that functionality already exists in the light strip pro.
Thank you!!

Wyze Color bulb should allow “effects” such as strobe & rainbow to replace RGB LED strips. There should be no reason why Wyze Color bulb doesn’t allow you to pre select say 6 to 12 colors and then cycle through said colors at a set pace by the user. This in effect would replace low powered RGB LED strips one may have purchased years ago.

Yes, I need some type of flicker bulb that is like a candle but either in the shape of a flame or not and have the option for different intensities/speeds of flickering and the option for it not to flicker, too. It could be part of an existing bulb or its own bulb if that wouldn’t be possible. It would also be nice if it was weatherproof, and I would like to put it outside next to my driveway. It also needs to be fairly bright because I want it to still light up the area. It would be good if the brightness was adjustable.

A feature for the wyze strip pro to mimic a tv being on that creates the illusion of a tv flicker rather than having the television being on. More of a safety feature when the house is empty in the evenings. .

Ooo, that’s a good idea! And maybe not even for the light strip pro, maybe also the bulbs and the floor lamp.

I have created a rule to blink a wyze bulb color in RED if my wyze floodlight siren goes off detecting a person in my carport after midnight. But I would like to have it blink alternating RED and BLUE. I don’t see anyway to make that happen other than adding a second bulb to do the other color.
I would like to see a blink option in the app, I would guess this might be something to add to wishlist.

[Mod Note]: Your topic was merged to this #wishlist request for better visibility and consistency in grouping similar requests. Please remember to scroll up to the top and click the VOTE button.

How did you create the rule to blink it? I have a Wyze outlet with a police light plugged into it which I can activate with person detection. Then after 60 seconds I have it turn off.

These are the actions included with color bulb 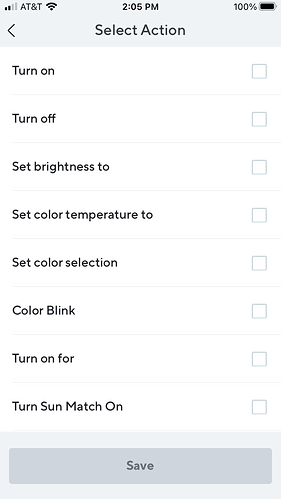 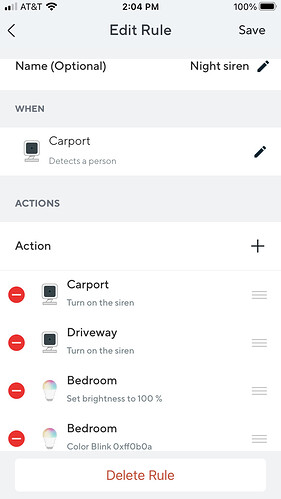