Wyze home monitoring looks promising. However there is no need to buy all devices if my home is Pre wired. Would rather be able to link up existing sensors to my wyze home monitoring set up. (Cheat: look up similar device provided by ring).

I asked this question over a year ago, and the answer they gave wasn’t helpful…hopefully they come up with something. I know there is a company called konnected and you can get a monitoring company with it. Hope this helps or someone from Wyze does!!

This would be great! There is a company that connects into an existing wired alarm system called Konnected. It is the same concept as what you mention but its a bit more hands on for the installation. It’s more of a DIY type solution. It would be nice if Wyze used the same concept but to connect to the Wyze Alarm eco system.

The integration I would like is to remove my existing box that has all of the wires from my wired sensors and replace it with a wyze (or 3rd party) bridge. Simply connect wires to the bridge which signals wyse sense hub via wifi when any of the sensors are tripped. 6 or more zones would be nice so the tripped sensor can be somewhat identified.

As long as requirements are kept simple like I described, it seems like a rather simple undertaking for the Wyze engineers. There is a large market of existing wired homes like mine that don’t want to waste our wired sensors that cover our entire home.

same here. haven’t even started using my wyze alarm yet, as there really is not good way to cover things, even with the motion sensors. and I really don’t want to replace all my existing sensors with new battery operated ones. especially the ones in my doors, as those are integrated into the door and trim.
I’d be happy to by the konnected device and do all the work, if they’d simply give us the integration.

Love to see the ability to add hardwired door and motion sensor inputs.
I have an existing security system with all hardwired sensors that are hidden in door frames and interior walls of my house. I would prefer to keep them and not have visible sensors.
There are things out there like the Konnected Alarm and the EnvisaLink 4 but it would be nice to have a complete Wyze system.

Create a way to retro fit the alarm in with exiting wired-in sensors that were installed when the home was built. Ring added this to their alarm. I am waiting on Wyze to do so before I go with a smart alarm.

I just got off the phone with one of your reps after a long conversation. I’ve been an alarm installer for 28 years and I’m very impressed with what Ring and you guys have been doing in the last few years. I was going to go with Ring for my business I’m opening on the side but my friend turned me on to Wyze. Seems like more or less the same stuff as RING for a much better price.

First suggestion, RING just came out with it so you guys should consider adding it as well. It’s called the Ring Retrofit kit. What it allows you to do is add up to 8 wired alarm zones per module. This is great if you have an existing alarm system you want to bring into the 21st century or just like the reliability of wired zones. You guys not having this is the only thing still making me consider going with Ring.

Second suggestion is something that as far as I can tell neither you or Ring have, that’s a low voltage relay module. You guys do have the remote control plug which can be used in conjunction with a power supply and relay to control low voltage devices like door strikes and sirens, but it would be nice if you had dedicated relay modules so I wouldn’t need to jerry rig stuff. Something like a retrofit module that would have 8 NC C NO relay connections would be great. You could turn them on and off with the app. If you needed to control higher power devices you could just have the relays on the board trip higher amperage relays (sold separately such as the Altronix RB30). Given that would not be something for your average Joe to play around with. I can only imagine a guy trying to use it to turn his space heater on and off and make the module catch on fire, but it would be gold for professionals like myself. You already sort of have what I’m looking for in the garage door opener module,

If you were to develop the relay module I could see myself using it in my laundromat to turn off broken machines and at the same time light up low voltage OUT OF ORDER signs. Could use it to hook into an electrically controlled valve to shut off all water in an emergency or even rig up the coke machine to give customers a free drink over my phone. That’s the beauty of relays, you’re only limited by your imagination (and knowledge of correct wiring : ) )

[Mod Note]: Your request was merged to this topic for consistency in grouping similar requests. Please remember to scroll up to the top and click the VOTE button. You may also wish to comment on and/or vote for the following associated wishlist topics:

I vote for this retro fit device and relays

This would be fantastic, I would love the idea too

Or if someone could create their own custom security integration module via Kickstarter I would buy into it.

Update. I took apart a few wyze plug modules and found they’re pretty easy to convert into low voltage modules. This will void your warranty but to make a long story short the existing module runs on 5v and 3.3v. 5v is for the relay and 3.3v is for the wifi part. The voltage regulator that steps down the voltage to 3.3 volts will work with an input of up to 15v so putting 12v into it to power industry standard relays has worked just fine for me. The on-board relay will not work with more than 5v so it would have to be removed.

As for putting in wired zones I haven’t tried it yet but it should be very easy to bootleg any wired zone into a wyze door sensor. Remove the magnetic switch and solder in wire leads.

After playing around with the wyze alarm one glaring thing that is missing is the option to trigger a wyze plug during an alarm condition (wyze sense hub siren is going off). If they were to do that tiny bit of programming you could easily make multiple external sirens. I posted that into another topic already.

Great work. So did you use local power at each sensor location or did you run them back to a central location? Do you have any pics that you can share?

Haven’t hooked them up at my business yet but when I do I’ll probably use a 12vdc 10A power supply to power all of my 12v devices then just run 18/4 (only need 18/2 but I like to have extra wires if needed). For the wyze cameras I bought some 12vdc to usb out adapters off ebay for $4 each so I can stop using the plug adapters. If you’re in a pinch you can just break open a usb car charger. Pretty much the same thing.

This is the prototype module. I made a YouTube video last week with details but my phone shot it vertical so I need to convert it to horizontal before I post it. 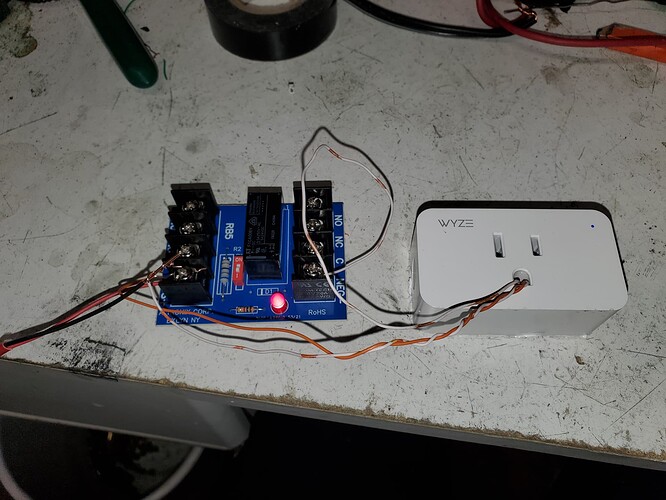 Regarding the siren, could you piggyback another separate 12V relay to activate a generic 12V siren?

They way I have it set up is that the Orange wire is your +DC the orange stripe is your ground. The brown stripe connects to ground when the wyze plug is in the on position.

So you would take your desired + power from 5v-12v and put it on the orange wire, you would also hook it to the + terminal on your desired relay. You connect the ground from your power supply to the white orange and the white brown to the ground (-) on the relay.

The wzye module in this configuration only supplies a connection to ground to the device of your choice. You can use whatever relay you desire so long as it’s coil doesn’t draw enough current to blow up the module. I don’t know what the spec is on that, but to be safe if you’re going to be using a more heavy duty relay use a smaller relay like the RB5 to trip that relay so as not to destroy your wzye module.

The RB5 module I have hooked up to it can sustain 4A draw which is enough for at least 4 heavy duty sirens (most draw 800mA or less). If you wanted to do something with more draw I’d recommend the RB30 which can handle up to I believe 25A. The RB5 is nice though because it gives you two outputs and can run on as little as 5 volts. You can chain relays together if you wanted but I’d suggest running your additional relays off of the external relay instead of chaining multiple relays to the wyze module. Not sure how much current the circuit can handle since it was only designed to run the relay the came with the module.

It would be easy to solder leads onto the NO an C leads of the existing relay for most applications since it’s rated for up to 15A, but keep in mind that you will have to solder on the right gauge wire for what you’re trying to run. 24 gauge wire like in the picture is fine for a relay or if you wanted to open up your garage door. Turn on toaster with it and you’re going to melt the wires. If you’re going to go that route I’d highly recommend using an inline fuse rated for the wire you’re running to avoid any fire hazards. You’d have to run the module on 5v input though since putting any more than that in will likely damage the relay coil or at the very least greatly shorten its life.

I attached a still from the 2nd module I made. Wire colors are different. Orange is +V Orange White is - input and green is - output to relay. 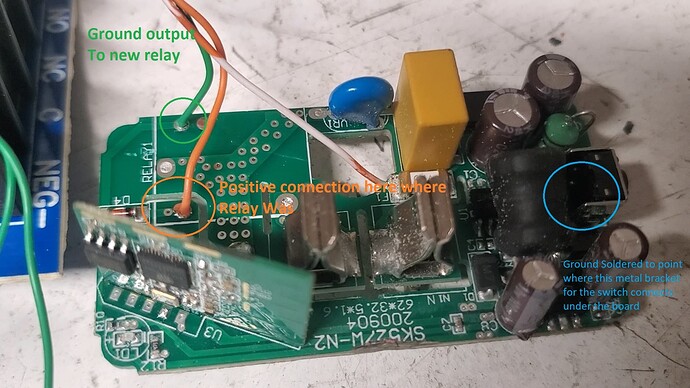 I wish you guys came out with a take over module hardwired/wireless the basically connects to existing hardwiring system and wirelessly to Wyze hub also a robust api app. Also a virtual keypad option on the app so people can have their own iPads or tablets on the wall to view their cameras and arm and disarm the entire system.