What are cloud-side changes and why is this update IMPORTANT??? How do we get an answer?!? And, sad to say, why do I stick with Wyze?

Well .
Since the update all of my sensors are offline.
Still can’t see more than 1 hour of past events .
Notifications still as delayed as they have always been, Where are the improvements ?
Great job Wyze !

Where are the improvements ?

There was never a claim of improvements, only changes.

This is why I’m still running an app and F/W about 4 releases back - at least I know what bugs I’m working around.

It’s a shame but to be safe one needs to backup their APK’s and be ready to restore.
I use an android app - SmsContactBackup but I’m sure there are many more.

I’m also not seeing the option to edit rooms. I’m on the latest app and vacuum firmware.

Gwen,
I was asked to use WyzeBeta a while back (Android) due to some issues with cameras not coming online in the app. I assumed from the emails that I would get updated from time to time and then told when to drop the Beta. Nothing but crickets in a very long time. As a result I have V2.12.201. Can I just ditch the Beta and move on?

Can I just ditch the Beta and move on?

Yes you can leave beta at anytime, it is 100% your choice to opt out if you wish.
You can also opt back at anytime you choose

I downloaded the update as soon as it came down to my iPhone. It the froze my system. The only thing I see when I try to load it up is the aqua WYZE screen. Help.

Gwen,
I changed the password in my router-modem. I downloaded the new V. I connected the camera to the electrical socket. I sign In to WYZE. It shows me my Home Cam & iClaud symbol. I press & it switches to the itetem I had imputed before. Let’s say I am assured the one camera is plugged in. I press that Cam botton-block. It gives me (error code 90) Device Is Off Line. How feo I solve it?
Thanks in advance.
LFP

I installed the new version (ios) hesitantly because I wasn’t having any issues. Now the screen snap shots don’t work. When you hold down the notification to see the image, the image is just a black screen. 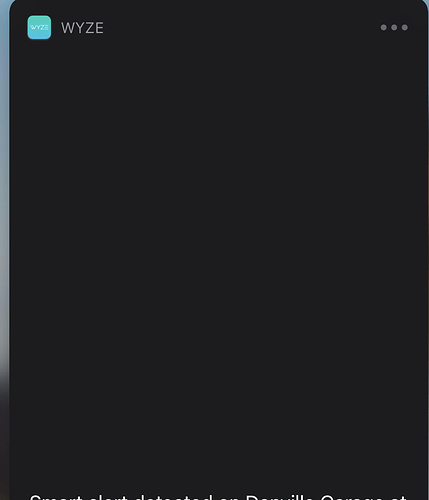 If it fixed the two years old ongoing Android push notification issue to give us notifications sooner than about ten minutes after the fact on a screen locked phone, I’d agree that it would be an important update. But as such (not a fix), I’d say this isn’t the very important update Android users are looking for.

Do your notifications arrive right away when your phone is charging?

I have to “agree” to the new T&C EVERY TIME I open the app now.

Do your notifications arrive right away when your phone is charging?

Yes, if the phone is charging it doesn’t go into doze like it will a minute or two after screen is locked. It’s most definitely WYZE’s job to figure out how to push notifications through a dozed phone. There’s nothing beside using ADB to disable doze that works, and the customer shouldn’t be expected to have to do that. In the extensive discussions on a few threads here about this, it’s been made clear that other manufacturers of similar cams and devices have instant notifications on a screen locked dozed android phone. But WYZE so far has not appeared to be taking this seriously and willing to admit the issue is real, and commit to a fix.

I just want to make sure that this is for the app no matter what product you have? My Android app shows v 2.16.23 and hasn’t been updated since December and doesn’t show any update available.

Currently running v2.16.23 on android. There is no newer version in the google play store. How do I get the update?

Possible Wyze did not put OS10 as suitable in their Android declaration manifest.

After installation of this update, all my cams show “no video at the selected time” when I choose playback.

It seems that rebooting all the cams brought back the timeline, but still I expect a more stable product from Wyze. There have been too many ongoing issues for far too long. It might be time to cut my losses and move on to another IP Camera vendor (like Eufy which is in the same price range as Wyze, does not charge a monitoring fee, has double the resolution, has on camera “human and PET detection” ((aka person detection)), but most of all has been reported to consistently work). This was a great experiment, but I think it might be time to move on. ;(

Never mind, rebooting the camera’s didn’t help. Clearing the cache and/or data on the app didn’t help either. I might try and reformat all the cards at a later date. GRRRRR