I set up two bulbs that are installed in my living room lamps into a lighting group.

Also when i manually turn on the group in the app myself , only 1 bulb will come on.

Based on our other conversations… they are in lamps correct with the 3 way rotating switch?

Make sure you have the switch rotated on the right position that allows the bulb to get the appropriate amount of power,

I’d also try pulling the bulb out of the socket (like a reboot) for a minute or two then reseeding it.

they are in lamps correct with the 3 way rotating switch?

Make sure you have the switch rotated on the right position that allows the bulb to get the appropriate amount of power,

I just have them set to where the light bulb has power but the bulb is not on , if that makes sense…

I’d also try pulling the bulb out of the socket (like a reboot) for a minute or two then reseeding it.

I will try this for when I notice 1 bulb not turning on . Over the last few times I’ve manually turned on the group and the scheduled rule has gone into effect both bulbs turn on.

None of the lamps are ever turned off since so idk why it doesn’t turn on 1 bulb . But I’ll try the troubleshooting steps when I notice it again .

Good day to you sir

I have bulbs in a couple of nightstand lamps. They are controlled by a contact sensor in one of the drawers. Open the drawer and the group is turned on. It works great 90% of the time.

Every once in a while only one of the 2 bulbs will turn on. I close the drawer and open it again and then they both turn on.

As near as I can figure, one of the bulb commands fails. My guess is an intermittent connection issue with that bulb.

For example last night , I was in the living room late at night and wanted to have the two light bulbs on to light up my living room.

I turned on the bulb group via the app, and 1 bulb turned on instantly and then the other one followed place

Seems like it’s a bit slow to send the signal

It happened again tonight . I have not moved the turn knob whatsoever and only 1 bulb from the 2 turned on

I removed it and added it back like you said

I also rotated the turn knob to the 3rd turn , which I guess means it’s getting all of the power ?

When i go to the group , I clicked on the power button and it turned off the 1 bulb that was on

So what am I doing wrong here…?

Welp I think I found the culprit

I have to manually add both bulbs ? I thought since I choose to turn on that bulb group it would turn both on…

Just delete the single bulb #1 action and add the action again choosing the group from the bottom of the device list.

The first image is your device page. Not your rule page 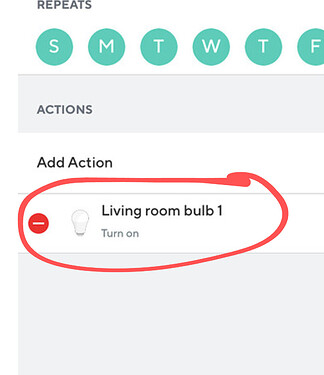 The bulb group is not chosen in the action list. The groups are at the bottom of the list.

Thanks for the help

Have a good evening