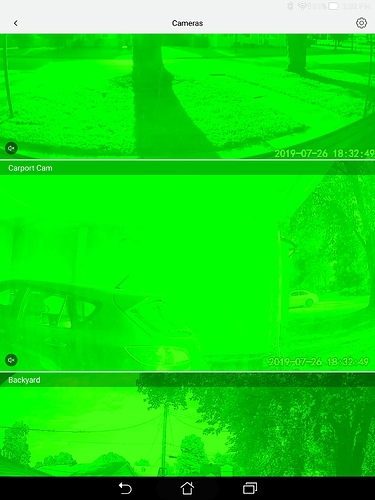 Is that the new night vision green mode?

That’s the new “is this one more reason to get a new tablet?” lol

Sorry guys, must have been something I ate. I truly did not think it would be that visible…

WYZE is testing out Holiday Themed Video recording. This is WYZE’s St. Patrick Day’s video theme. Also coming up with themes for Christmas (Red and Green tints), 4th of July (Red, White and Blue tints), Valentines (Red tint) etc. You are testing the beta of the Holiday special effects.

I also have the hemorrhoidal extension whereupon any images I capture with a person in it they suddenly become more lumpy in the rear. Very freeing.

I had the purple screen of death today and after removing the sd card did a factory reset and fixed it completely. try that. it can’t hurt

It’s only on doing this on the one device that already has issues with other video.

I am experiencing this too. Anyone find solution?

I don’t suppose you’re having this problem on an Asus device? Tablet?

Interesting. Mine’s an S 8. For me it’s not a huge deal because this is not the first screen I go to for my cams (just out of normal usage)

I get the green after I knock 2 different cams off from the window sill. It tends to stay for 2 or 3 days and then corrects??

I’ll have to try again tomorrow, tablet is charging. But all my cams are in different rooms and haven’t moved.

I just tried that on mine, now it won’t read the sd card, and its still purple. It’s one I vinyl wrapped too. Might just keep it in night vision mode.

Still green on the tablet, Wyze app’s basically useless on there now. TinyCam to the rescue. I did just now notice however that the app now runs on Chrome OS. Also useless there, but baby steps.

My problem with green screen on Asus tablet appears fixed with latest beta version of app.

Ah yes, all is well here too. Thanks.

This is great to hear from you all!