Thanks, I will check out your Home Assistant integration this weekend.

One quick question do I need to uninstall or disable the one I’ve got installed now?

Also, I got the tilt sensor soldered in and while not pretty, it works as planned.

I ended up not removing the magnetic reed sensor as it is open without the magnet and just soldered in top of it. 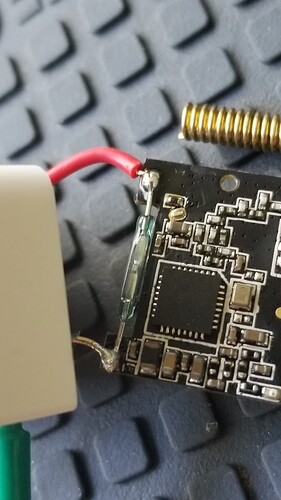 Here is a pic of the final job. Sadly, I had my heat shrink on the red wire too close to where I was soldering the final joint and it shrunk prematurely so I used more on just the soldered area. Oh well… it is under the mailbox so nobody will see it anyway. 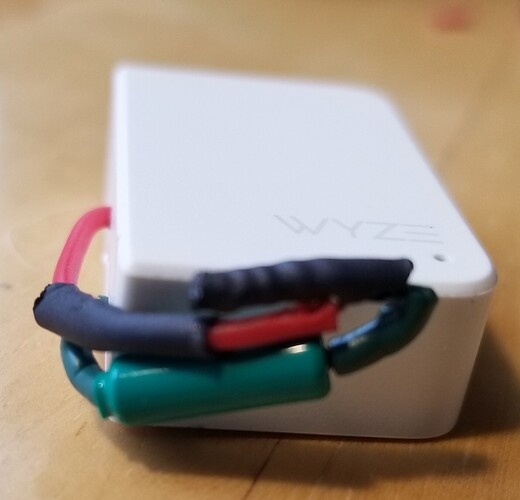 I’m probably going to pop in a new battery then seal it with some silicon calk.

NOTE: due to the limited amount of mailbox door exposed under the mailbox and limited space in which it can move, I have to mount the sensor horizontal with the thin right edge (the side with the curves) up against the mailbox door so the where it says Wyze by the red light is facing up to the bottom of the mailbox. That will also allow me to pop the back off to change the battery without removing it from the mailbox.

Maybe instead of a new cr1632, I should solder on a battery pack with two AAA batteries and give it 10x the battery life then I could seal it up good and mount it with super glue?

do I need to uninstall or disable the one I’ve got installed now?

You shouldn’t need to as they are totally separate. The wyzeapi actually talks to the Wyze servers and can also deal with bulbs, plugs and the HMS, in addition to the V1 and V2 sensors. I think it also has some functionality for the lock, but since I don’t have one I can’t elaborate.

Hello People and @davsav .
Regarding placing a contact sensor under a mailbox.
I did not have much side skirt protection under my mailbox. More room for the sensor was created by rabbeting out some of the wood adaptor plate between the mailbox and the support post. A piece of 1/8" PVC was used to provide a support shelf for the sensor. The sensor is well shielded and easy to get at. No special sealing was used. It was installed Jan 2020 an.d has worked without fail
Picture 3 of Thinking outside the metal (steel) maillbox - 2 shows how this looks.

Victor, I appreciated seeing what you had done.

I thought about getting an external magnetic sensor and using extension wires to avoid putting the sensor inside the box.

My mailbox is similar in design to this one. 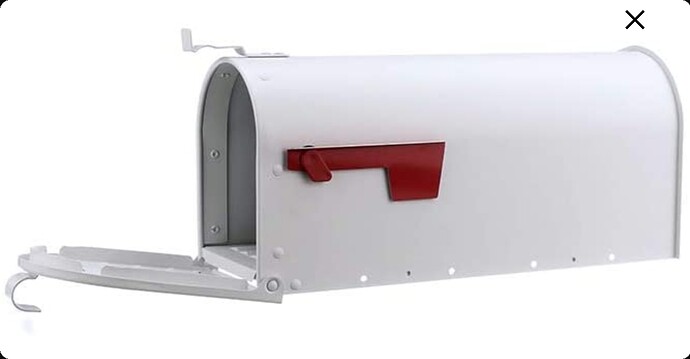 So with a curved top and small opening there wasn’t really any great location to mount a magnetic sensor inside the box anyway. Plus I get a lot of packages and I figured it was just a matter of time until the postman accidentally rips off something when shoving the mail in.

If you look at the picture above, you will see there is about 3/4" under the box, with about half of that available on the door exposed below the hinge as half of that is taken up where there is a lip at the front of the box floor.

I had thought about other ways to mount a contact sensor, such as on the side of the box but I didn’t want it to show.

One other side note… I found another "bricked"sensor and paired it with Home Assistant using the presently installed wyze integration but without a mac address, Home Assistant only shows 1 sensor on the dashboard and that display changes when either of the sensors are activated.

Not sure what I will do with the second one yet… though maybe I will use it to figure out extended battery options like does it work with two AAA batteries.

Next, I may just take a good contact sensor with a MAC and do a tilt mod to it but with the battery in the whole time while I’m soldering it. That way I can use the other HA integration and also see it in the wyze app and have it trigger a video on the wyze cam presently pointed at the mailbox so I knew when I had mail.

Hello, All and @davsav
I would think external AAA batteries should power a sensor for a very long time as long as they are hooked up to provide the correct voltage.

Below is a link to an externally mounted mailbox contact sensor enclosure I meant to post a while back but forgot to. The discussions in this post reminded me.
Some of you may find it interesting.

Today I mounted my Wyze tilt modified contact sensor to my mailbox.

I used some of that 3M two sided tape that came with the metal disk of a V2 cam. I cut a rectangle out of it to match the side of the Wyze sensor.

Here is an [ALBUM]Mailbox with contact sensor converted to a tilt sensor - Album on Imgur) with a video showing how it is mounted and how it rotates when the door is opened.

I’d have shown Home Assistant activating the changes but I only had one phone on me but it does work.

Hello, davsav.
I looked at your pictures and the video. A very nice simple system.
If the tape, or changing the battery should give you problems in the future, I have a suggested solution.

See the picture below: 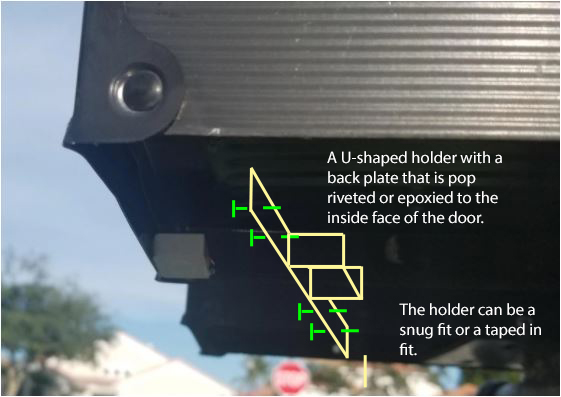 It appears that there is room for the support that is depicted in the picture. With this holder, changing the battery would involve slipping out the contact sensor sending unit and changing the battery, and returning the unit to the holder. This would be an easy part to design and 3D print.
Till later.
Victor Maletic.

I like the idea of the 3d printed bracket to hold the sensor but I don’t have a 3d printer yet so the tape has to do for now.

The 2 sided tape held for today’s mail delivery… so far so good.

The 2 sided tape is on the edge of the body of the sensor and the battery compartment is facing down so that way I can pop off the back to change the battery and leave the sensor in place. I did it that way when I mounted the tilt switch since I figured I might end up using super glue to mount it.

Getting the battery out is easy. For me putting in the new battery would be a challenge, I would have to sit on the ground in front of the mailbox to reach up and make the change. This could make the neighbor hood kids curious. Then I would have problems getting up.
I’m almost 80 years old.

I don’t have a 3D printer either, but many libraries do. And have printed all of my items for free with them.

WildBill, I loaded the JoshuaMilliken/ha-wyzeapi integration you suggested. It was great for about an hour then crashed my Home Assistant. I rebooted and the same thing happened again so I had to disable it.

I’m thinking that because I have so many Wyze products (43 listed in my app), that it takes too many resources on my Pi 3b.

While I’m not 80 yet, I did give a battery change some thought, which is why I mounted the tilt sensor with the back facing down so it could be changed. I wasn’t planning on replacing the battery myself… I was going to send my kid… Let him earn his keep. lol

I hadn’t thought about using free public printers. I will check with my local library to see if they have one for use. Thanks for the tip.

So I called around to the local libraries and there are a few that have public use 3d printers, all but one of them are temporarily closed due to Covid.

The remaining one is kind of far but is accepting appointments. Sadly, they won’t accept an appointment until I renew my card for that library, which expired in 2012 and all renewals must be done in person.

Do you have the STL file or need someone to design it? You can check out Shapeways.com. There’s people on there that will print your item and send it to you - for a fee, usually very reasonable.

Haven’t had a crash yet, but have had some networking issues. I’m running a Pi4, though. Not sure how many Wyze devices I have but I also have some Kasa plugs and some old X10 stuff going through it, probably close to what you have for Wyze.

Sam, I will checkout shapeways, thanks for the tip.

Also, I’ve got a bunch of X10 stuff from back in the day. Most of it is still new in the box and never got used. Is it worth anything? What’s it good for these days?

Wild bill, a Pi 3b has 1 gig of Ram while there are various models of the Pi 4, with the bottom end having 1 gig of ram.

Basically HA no longer responds to the web interface or the app though I can still ping it. I’m running headless so no idea what it says on the display or if it will respond to the keyboard. I had enabled ssh but only have been able to connect to it by ssh on the web interface.

Yeah…now you have some idea as to how old I am.

Good to hear davsav that you will have access to a library 3D printer. I now have several library cards.
I designed a contact sensor shelf support that should work with your setup. This is the link to the STL file:Contact Sensor Shelf.stl

Below is slicer rendering of it. 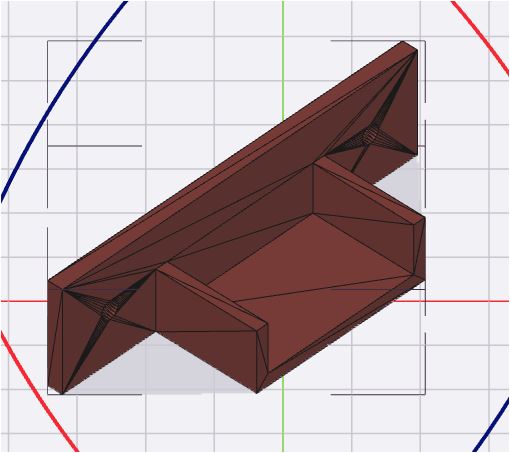 The two holes are sized for #6x32 machine screws that are spaced 55mm apart and 10mm up from the bottom edge.

For this particular design, you would have to space out the tilt sensor to allow room for the 2.4mm thick shelf side wall.

You are welcome to the STL file. No charge.

Thanks for the file.

As I’m new to 3d printing, what program would you suggest I use to edit the file… or make new ones?

I ask because I don’t think there is 10 mm of space available to mount on to and the sensor I made has the tilt switch on one side so I would need to notch one side for the sensor.