"FailedData is not found" toast notification

When I navigate from the Wyze Home screen to Account>Services>Cam Plus>my camera and proceed to click that, I receive a continuous “loading…” screen along with a brief toast message (that I cannot capture with a screenshot) that says “FailedData is not found.” The app doesn’t freeze, but I am unable to navigate in the app with the back button/gesture. I have to go into Recent Apps and close it and restart the app. What’s going on here?

I see that you’ve included a WCO firmware version. Cam plus isn’t currently compatible with the WCO yet! the app shouldn’t do that when you try to add the WCO to Cam Plus though.

Everyone keeps saying that the app isn’t compatible. First, I’m not sure why you’re allowing people to subscribe to C+ with WCOs if it’s not in a compatible state. Second, after subscribing, i gained immediate ability to remove cooldowns and increase max recording length which i did not have prior. Isn’t this a feature of C+? I go into the Settings menu for my camera and right there on the button for Event Recording is the PLUS logo.

I don’t work for Wyze, I’m just a user who tries to help.
The cool down can be adjusted on the WCOs between 1 to 5 minutes without Cam Plus.
Are you using beta firmware on the camera and base?

Can you double check and confirm your app version? The WCO and base firmware you posted are beyond production versions so I am guessing you are in the beta program. Wco is currently in beta, which is why you have more options. Beta will have bugs as it is prerelease.

Camplus is marketed to users for their cameras. You buy a subscription then add it to which ever camera you choose. On the camplus page it says camplus is coming soon for the WCO. 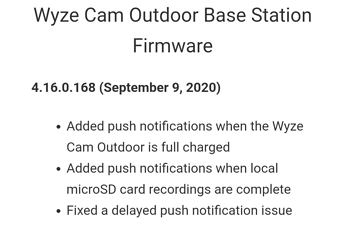 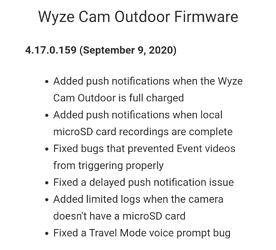 My mistake, I didn’t think that you were more affiliated with Wyze. Perhaps I hadn’t realized the 1 to 5 minute range prior to updating, but at one point I’m nearly certain there was only a max of 3 minutes.

As far as I know, I’m running beta all around mainly to try to get the newly released features, but those new features aren’t always the source of the problem even on beta channels. I’m on BASE .175 and WCO .173 (not the latest, and I’m unable to update because over in another thread they said they have to release a new beta app that will recognize the new base and cam firmware yet the first handfuls of commenters all say they updated successfully…)

2.14.35 and yes indeed I am in the beta. I understand the buggy aspect to beta channel releases, but the thing is is that issues people have aren’t always with the NEW changes in beta releases. Things that were okay seem to change with certain releases that were previously running stable despite the beta.

LIke I mentioned before, everyone’s reply is that that C+ isn’t compatible yet, but I was able to subscribe and add my WCO to C+ in the app directly after using the wyze website on my work PC. Wyze claims in another thread I’m in that they’re supposed to release a new beta app in order for me to update my base and WCO to the newest firmware yet the same thread’s first commenters are all saying they’ve updated successfully.

This issue was posted in a main section of the forum, not in the beta section. I’ve recommended this thread be moved to the Beta section.

Have you sent in an app log and reported your issue to the devs?

From that everyone is saying, isn’t it just going to chalked up to WCO not being compatible with C+ yet? I’m not entirely certain how to perform and upload those reports yet. I’ll look into it.