I am getting a “Failed to Upload” error with Doorbell Pro on every event. I’ve power cycled the doorbell and router, removed/readded doorbell to app, and prioritized in QoS. Router, doorbell, and chime are all within 20 feet of each other with no major walls between them. Any ideas?

Any specific error code? Is there camplus on the camera? If there is, have you removed the license to see how it behaves then? What app version are you using? What firmware version is on the camera?

Welcome to the user-to-user community, @yeksim!

You can also use the 5 GHz band on the VDB Pro, so that’s another possible troubleshooting avenue.

Another thing to try as a possibility is turning off anything on your router that theoretically “helps” decide who gets priority. This is only as a test; you can re-establish those things later. Some “helpers” aren’t all they are cracked up to be. Things like QoS, airtime fairness, smart connect, etc. You might also temporarily turn off any shield protection too. If any of them corrects the situation, then we can decide what to do at that point.

And like @Omgitstony suggested, remove any Cam Plus license if that is attached to make sure there isn’t a new issue there. He also asked if everything (software, firmware) is up-to-date, so let us know.

No error code but I added the image of the message I am getting. I am using the most up-to-date app (updated yesterday to 2.27.33) and removed the Cam Plus license. Weird thing is that even after removing the license, it still says “Wyze Cam Plus” at the bottom of the live feed. Firmware says that it is up to date (v1.0.47). Another user suggested I move the chime in between the doorbell and router which I did but I am still experiencing the same issue. 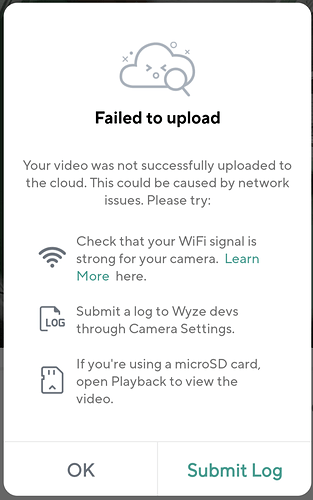 I placed the chime in between the doorbell and router and still experiencing the same issue. I am actually glad this is not the solution since this would place the chime in the same room as the front door which means I’d only be able to hear the doorbell if I’m near the front door and nowhere else in my house and that kind of defeats the purpose of having a doorbell…

Another thing to mention is that I can see the live feed just fine. There is no lag and the bitrate is between 40 and 100. Not sure what a good bitrate is but it’s comparable to all the other cameras I have.

I honestly don’t think it’s a network issue. I used the Route This app suggested by Wyze and have 168 down / 163 up at the location of the bell. Every other Wyze device I have has no issues whatsoever. I’m wondering if there is either something wrong with the camera itself or this is caused by the AWS issue the other day.

Did anything work here to fix? My mom got two VDBs and this happens to both. Live video works just fine but every event on both, in two different places, fails to upload.