Do the cameras adjust IR brightness according to light level?

I just purchased my third Wyzecam, it’s a v2, I also have another v2 cam and a ptz cam, but this new one puts out IR light so bright that it looks like my IR floodlights I have outside for my IP cameras. Are the other two cameras adjusting their IR brightness because the new one is brighter? The image for my older cameras is darker than the new one except for where the light is blaring around the corners from the new camera.

They are auto-brightness lights. For instance if you have something highly IR reflective in sight, the lights will dim for that object and your overall IR range for that camera will be reduced. I suppose another camera’s lights might have an effect, but I have no experience with that, as I don’t have cameras that close together.

Thank you! that makes sense because the camera that is giving off most light is facing white cabinets and appliances, whereas the other two are facing large, mostly empty rooms.

I have other cameras in my house and I have seen a fairly noticeable difference when it’s picking up the other cameras IR lights, even if the source light isn’t directly in sight.

Small technical point here… I believe the IR LEDs emit a fixed intensity. It is the camera’s auto exposure that is adjusting for the reflectivity of the IR illumination that it is seeing.

BTW, if the original camera is a V1, some of those had fewer IR LEDs and thus less intense illumination. 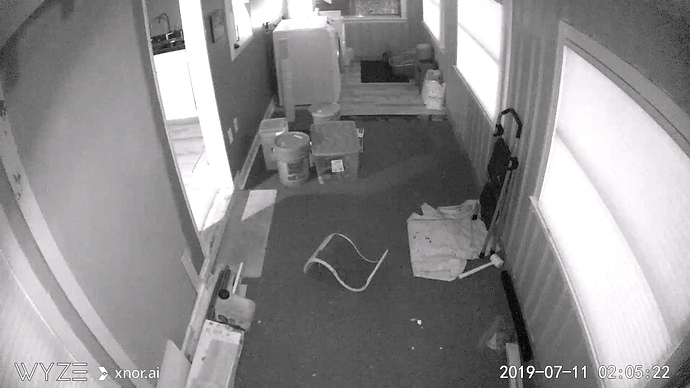 I believe the IR LEDs emit a fixed intensity.

No, I can see the lights dim when I angle the cam towards a reflective surface, like my test showed on top of my washing machine (it was the only room without windows). I thought the lights were bad until I realized what was happening and angled the cam up towards the ceiling. The lights visibly brightened back up that point.

And then there is this: Night Vision LEDs Not Bright Enough? - #37 by DreadPirateRush