Agreed. It would be a very nice feature.

This would be a nice feature to have if possible! It was one of the features my Dropcams/Nest cams had that I liked, especially if I didn’t think about setting up the time lapse before I worked on some project in view of my cameras.

any update on it?

#wishlist topics can have one of three tags, “Probably-not”, “Maybe-later”, and “Researching”. If this topic changes to “Researching”, then that means it is on Wyze’s radar. It it goes forward, it would then move to the #roadmp category with the tag, “In-development”. Please see this if you would like more information on how #wishlist and #roadmap work.

Please read through How to Use the Wishlist and How to Read the Roadmap .

Based on @WyzeGwendolyn’s earlier post in the thread, it seems like it should say “Researching,” right? Or maybe I don’t understand the tags very well. Haha.

The “maybe-later” seems accurate to me based on that comment.

I suppose. I guess I imagined “maybe later” as a little more dismissive or something. Haha. It seems like a lot of far-fetched ideas end up getting the “maybe later” tag. I figured if it’s something they’ve actually talked about in meetings and hope to do at some point in the future, it would say “researching.” But like I said, I guess I might not understand the exact implications of the tags.

The “probably-not” tag is the one no one wants to see on a #wishlist topic.

Gwendolyn does a pretty good job of explaining the tags in the below posts. I admit it is a little confusing at first. Hope that helps!

Maybe-later is a bit of a catch-all (we only move stuff to probably-not if we’re VERY sure we won’t be going that direction). But it includes stuff that isn’t off the table and stuff that we actually ARE thinking of implementing. Researching is where we start making progress on it beyond thinking, “Yeah, that would be nice!”

Makes sense. Yeah, I can tell the categorization is pretty broad. It would be nice to see two levels within the current “maybe-later,” (“Maybe Later,” “Probably Later,” for example) but I understand you guys might not want to do that for strategic reasons. Haha.

“Maybe later” would mean “it’s not off the table, but we haven’t really devoted any resources to thinking about it.”

“Probably later” would mean “it’s something we’ve discussed internally, and there’s some sense that this is something we might like to pursue, but no concrete steps have been taken yet.”

Yeah, it would be pretty difficult to manage and we have a lot of shifts happen before the researching stage (and sometimes at that stage) so it may be more frustrating for some people.

This would be a great feature. Let’s get this bumped up the priority list.

I don’t know what I want to time lapse until after the fact. The feature as it exists is a novelty.

If it requires the on-camera processing power, I’m guessing this probably won’t get implemented due to hardware limitations, but you can already accomplish this with external software, as long as you have access to the source videos. FFmpeg is the most powerful solution, but might be a bit tricky if you’re not comfortable with command-line interfaces. If you Google it, there are several GUI options which are purpose-built for the task, though.

This kind of relates to the fast forward feature when viewing recorded footage, and maybe can be integrated into that, But I’d like to create timr lapses after the fact since the footage is already there.

It’s painful to scroll through days of motion clips. We need the ability to export all clips with a user-set speed so we can view a week (or more) worth of SD card content in a 5 or 10 minute generated video for 2 reasons:

I need this feature badly.
It snowed last night and I would love to have a time lapse of it.

In the setting it lets you go back to a previous time.

If it can’t happen why would you let it set a date in the past?

Hello, I could not find anyone asking for this, sorry if posted before.

Right now I have about 6 days of playback video I can rewind through. Is there any way I can create a timelapse from it?

There are times where I forgot to turn it on, or a couple times it says it was recording, but the clip is only a few seconds long(bug?) and I lose multiple days worth of footage.

Currently, timelapses can only be generated from an immediate point onwards. Generating timelapses without interfacing directly with the device involves a long process:

It would be awesome to have the app give an option to bracket-cut a video, and optionally set a timelapse interval. The video could then be processed on the camera, and downloaded from the “Album” when ready.

Over 4 years later, any progress on at least getting this scheduled?

To anyone running Linux, I wrote a script that will create a timelapse from the existing playback videos. The only downside is you still need to plug your sd card into your computer, since there’s no remote access into the Wyze.

You can find it here: 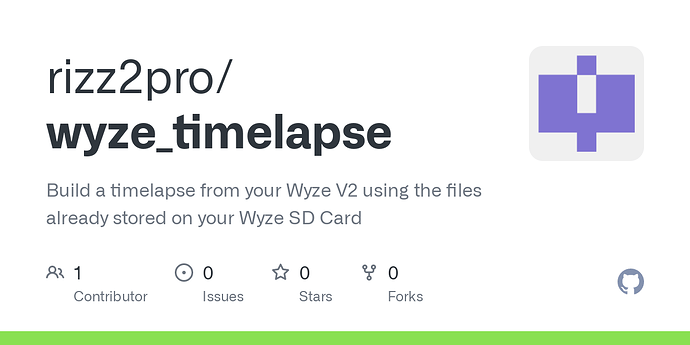 GitHub - rizz2pro/wyze_timelapse: Build a timelapse from your Wyze V2 using...