Often my wyze camera event includes only half of the event. I’d like to export the recording from the sd card with manually set start and end datetime parameters. There is a greyed our record and photo function that doesn’t work from the sd card playback tab, saying “permission denied”. I have both person detection and the motion capture feature enabled. Is there a way to do this rather simply (versus removing the sd card and having to custom edit with other software), and if not is this on the menu of future functionality? Thank you

So basically, When the camera doesn’t start or end the event when i think it should, and i have this information on my sd card, is there a way to widen the start and end of the event for the purpose of export?

I’m not clear here - the’ event’ is only a 12 second clip, kind of a marker in time, and it is cloud based. With the sd card you can use the playback feature to go to that point in time and see the happenings before and after the event.
The only way I know of the export a block of time from the card without removing it, is to start recording and just let it record for as long as you need, then stop manually. That will save the recording to your Album and you can then edit it.
There is a Forum Wishlist where you can make suggestions and vote for things others have requested. This is a topic many have requested - don’t forget to Vote for what you want!

I pay for motion capture so afaik the clips last as long as there is motion.

There is an export option, I’m guessing this pulls from the cloud instead of sd. (Reread your reply, so you are saying this in fact the case, dern)

Right, that’s my question, is there a way to export a custom length of recording that the device has. The motion detection is a bit iffy, in my case i can only see the persons back in the ’ event’. Using the playback tab, i can see their face, and had to screen record the playback on my iPhone to have something i could present to authorities.

So, it seems like this functionality doesn’t exist both from me not finding it and also your reply. Do you know where i can find this topic to upvote?

//i didn’t find my suggestion/request so i made a post. Fingers crossed?

There is a greyed our record and photo function that doesn’t work from the sd card playback tab, saying “permission denied”

With this I would recheck all your app permissions in your devices OS. I believe it’s similar to when someone’s microphone use is denied via app because the microphone usage was denied when installing the Wyze app.

And you say you pay for motion capture, is the CMC service enabled on the camera you are wishing to get more length on your event clips?

Are you able to use the record functionality from the playback tab while the video is playing back?

Are you able to use the record functionality from the playback tab while the video is playing back?

Yep from live view and playback, thats what the manual record button is for. If I go into my app settings and disable storage permissions, the app won’t load because it said I need that permission. Android 10, pixel 3, Wyze app 2.7.19.

What OS are you running? I disabled my microphone permissions and I was able to open the app, but not use the microphone. Then I got a permission denied dialog box. 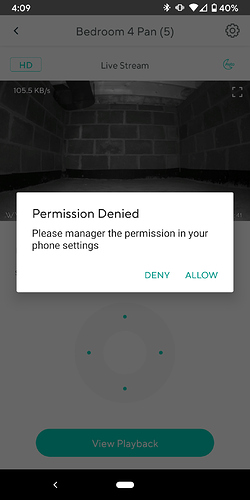 Wow, it was a permission issue. I thought the visibility of the record button was just ui continuity from live stream screen

It’s still greyed out but adding read and write photo permissions, versus just “add photos” did the trick.

This effectively solves my problem, the other export wishlist stuff is really a different thing. Just needed to toggle when the recording begins and ends from local storage for any particular interesting clip of the need arises

Ios13, if i recall my dialog box just said “permission denied” which i took as “not from this screen, you don’t”

I could record from the live screen, but not playback tab.