Mine just came back

Mine is back now

My application made a big flickering glitch on my S7 and then simply vanished. A few minutes later I had the Mac addresses and could hear notifications and then they vanished from my phone.

I uninstalled and reinstalled twice and finally got it back on my phone working, but now everything is acting weird including the sync time, major lag between rotating my camera and seeing it on my screen etc.

Seems that as of late, Wyze is going the same direction as SimpliSafe whose products are complete junk. We tried out their full system in my place, as well as an elderly veteran that I was working with at the time. It was an absolute Nightmare and I am noticing similarities between the two company’s and I really hope Wyze does not go down that path.

I also hope they get these cameras fixed because before the last couple of updates they were absolutely wonderful and I was really happy with the product, except for the fact that all of my sensors were DOA which Home Depot would not fix and I could not get a response from Wyze which I thought was pretty lame.

(Btw, these issues are now presenting on my phone, Samsung Tab, as well as my iPad)

Just my two cents as a new user

Seriously? Again? Everything is s blanked out, with some message briefly showing something about my cart. Get your act together Wyze.

On top of it all Wyze logged me out of my application and I cannot log in or get a password reset. How does someone run a company this way?

Wyze is aware of it and they are working on it.

11/14/20 9:48 PM PT - Our metrics are looking good and we’ve worked our way through the backlog of status updates and notifications. We appreciate your patience through this process. If you are still having trouble with your Wyze devices or app, please contact Wyze Customer Support. 8:24 PM PT - Working through the backlog of device events from during the outage has taken some more time than initially expected. We now estimate that this will be concluded in about half an hour. In the meantime, …

My cameras and devices all disappeared just now. When I log back in I get just “new device” and everything’s gone. I’m on android on a Pixel 3A.

Happening again. This is starting to get old.
.
And this time, the sensors (motion and contact) have gone offline or non-responsive even if online.

Wyze will start losing customers, including loyal ones like myself, if this kind of trouble recurs at this frequency.

This is why I now block all Wyze emails. The same problems pop up for weeks and months. Make your cameras work, or I have zero interest in your scales, thermometers, or robot vacuum. Super simple guys. Be good at something, or irrelevant at everything.

It’s been 24 days, is Engineering still working on trying to resolve the missing devices issue? Will you be updating this posting once the issue is resolved, so we can go in and test?

I’m sorry it has taken me so long to see your post. Are you still experiencing this problem with the missing devices?

Yes, they asked me to update to the latest version, but after doing that, all devices were still missing from the app.
Engineering said I could go ahead and re-install my wyze band. Doing that would not cause any issue with the cameras.

Unfortunately I can’t reinstall the cameras as they’re being used as security cams for our vacation home in Maine and we can’t go there until Spring.

I have experienced this issue several times myself and you shouldn’t have to reinstall the cameras. I changed to a different app version and all my devices populated in the list without uninstalling any devices. This is a known bug in the app.

What app version are you currently using?

How to find app version.

Note, I am using Android Beta app v2.16.24 so the results may vary from the production app.

Yes, switching apps is easy. I would recommend giving the Beta app a try. You can go back to the production app anytime by tapping leave.

To access the Android Beta app, go to the Google play store and search for Wyze labs, scroll down and tap on Join. Afterwards delete the production app and install the Beta app. After deleting the production app, allow 5 to 10 minutes until you see Wyze (Beta) in the playstore. 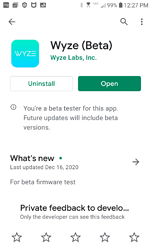 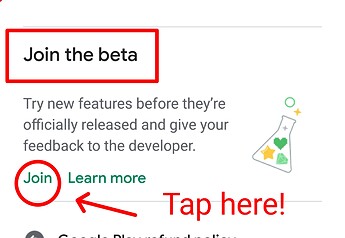 When I search play store for the beta app, I don’t get anything (see below).

I am able to go to “account” – > about to join the beta, but although I selected all the apps when joining, it shows me just the wyze band (see screenshots below). 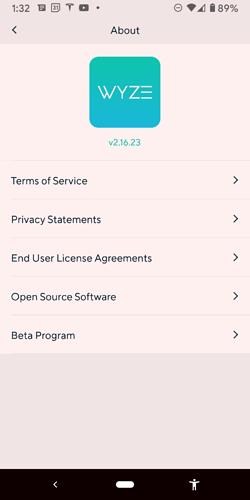 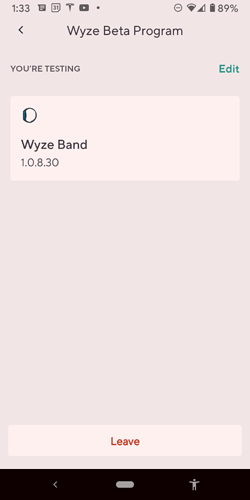 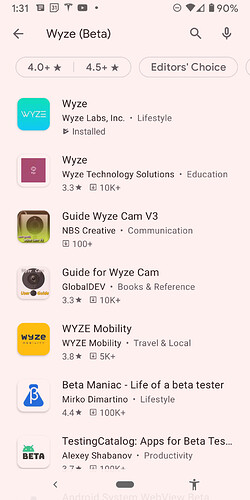 Take another look at the play store when you choose “Wyze” (see your pic below) does it show “Wyze” or “Wyze (Beta)” like my first pic in my post above? 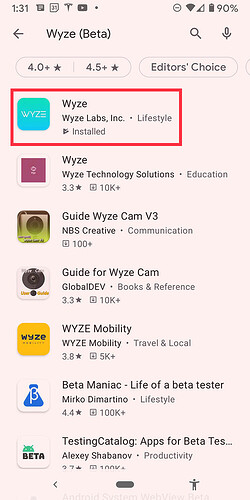 Thanks! Went through your instructions again and was able to join and install the beta version!

Good news is that the version installed is now v2.16.24
Bad news is the no cameras still

So weird! I know that’s very frustrating sorry to hear.