Camera turns on its own

Bought four pan cameras a week ago. All working well except one. Twice now when I’ve logged on I’ve noticed the camera has turned itself to the reset position. It’s up high so not in a location somebody would accidentally move it. My father is elderly and lives alone so nobody has touched it.

I’m probably just going to return it back to Home Depot and exchange it for a new one but before I hassle with that I was wondering if anyone had any suggestions. Seems like it must be a software glitch Firmware is updated. No pan settings are activated. It’s set up identical to the others except it doesn’t have a SD card in it. I’ve reset it via app. I’m going over there tomorrow so I will unplug/replug it to see if that works…

It sounds like it’s doing a power reset. Is it on an extra long USB extension cable? I suggest also checking to make sure all power connections are secure.

It’s not on an extension cord. Plugged directly into the wall.

I don’t have footage of the first time it happened, but I did look at the footage of it happening this morning. And out of the blue it just started spinning around ultimately stopping in the reset position.

I submitted a ticket it to diagnose the problem, but the more I thought about it, since it’s happened twice now in less than a week since I got it, and with it residing in my father’s house making testing various scenarios difficult, I’m just going to return it and get a new one. If it happens again with the new one, then I’ll know it’s something specific to the house that’s the problem, be it the outlet or location.

I had a similar issue,:

I just had to exchange one of my brand new Pan Cams for the same issue. ( I have 3 total) After the installation the Pan Cam would turn itself off and on. ( it would make its clicks and the pan would reset to default)I tried using the cables from the other pan cam’s and it did not revolve the issue, also tried different memory cards, different outlets for the power brick. I think sometimes it just may be a simple defect. This is based on my personal experience and may not be the case for you, bu…

I’m not sure if its the same as yours, because you did not mentioned that it will continually do this. Does your Pan Cam power cycle or “reset” to default position only once, or have you observed it doing this in a loop, or 10 times then its fine for an hour etc… I’m Also curious when you purchased yours from Home Depot, because the one I had an issue with was from Home Depot, wondering if there may be a batch that went out that could have issues?

Mine has done it twice. It just starts spinning around maybe one or two revolutions and then finally settles in the reset position. Both times, it was working fine when I went to bed and had been repositioned when I woke up. So the fact that it happened around the same time both times leads me to believe it’s a software glitch causing it to reset itself at that time.

How long after you activated yours did the problem start? I just bought them this past Monday so two instances in less than a week of activation is enough for me to decide to return it. and based on your experience trying to fix it to no avail, it affirms my decision to get a new one. I’ll leave the troubleshooting up to Wyze. I sent them my log so hopefully they can spot the trouble and fix it with firmware or something. I told them the exact time it happened so they know where to look in the log for a problem. I don’t know what happens to the camera after return, but I hope it goes back to Wyze so they can check it out and try to ascertain what the problem is.

Regarding a possible batch problem, I got mine from a Home Depot in Springfield, Virginia in the Washington DC area. Unlike places like Amazon, Home Depot has a very long return period so I’m going to stick with buying from them so I’ll have a few months to make sure it works. These cameras aren’t perfect but I’ve been so impressed with them, if I have to, I’ll keep re-buying until I get a good one. Maybe I’ll get the replacement from a different Home Depot. Although, they’re probably all from the same batch in this area.

Has reset for a third time. Again, overnight. Seems like it’s on an every other day reset schedule. with this level of consistency, it must be a software glitch.

I’ll be returning it today.

Had an outside mounted camera plugged into an outlet on my deck of my condo.

Every morning I woke up to the camera reset. I compensated by setting a detection zone so the camera always returned to my desired position rather than the default following power on.

After about a month I bumped into one of the HOA guys replacing some exterior lightbulbs. I mentioned this overnight reset that was happening. He laughed and pointed out that the outlets on our decks were actually on a separate circuit from our homes. And that circuit was interrupted each night by a timer that turned power to the circuit off waited about 5 seconds and restored the power.

No one currently there seems to know why it does that but for whatever reason it blindly does so every night at 2:30 AM. There is another interrupter tied to a photo sensor that turns the outside lighting circuit on when it gets dark and off when it is light.

There isn’t a timer or anything on mine, just plugged into the wall outlet. If the new one does it then I’ll plug in a clock. If I find it blinking, it would indicate the outlet lost power at some point.

Actually clocks are way less sensitive than the cameras to short power “flickers”. My microwave “clock” for instance will reset if you sneeze too hard. The clock on my stove will survive a full power failure where every light in the house, the TV’s and the modem and routers all go off and reset, yet there sits the stove clock not loosing a second. (It’s digital as well)

It’s hard to say what the cause is in your case. I use a power monitor tool that has a 48 hour history of your AC showing exact voltage and amperage of a monitored outlet. They cost around 30 bucks. Worth it for diagnosing these types of issues as it takes the guesswork out of the equation. If your power is fine then you know it’s the device.

I have a Pan camera that resets a couple times a week. It’s not consistant.
All I did was physically rotate and tip it so the default position is where I want it to be pointed. It is a work around, like setting a detection zone, but it works.

Bruce, I had no idea that detection zone worked as a default position. I am in the process of compiling a “my observations as a new user” list to post. Being able to lock the camera position is high on that list. Sometimes finding that sweet spot again after moving the camera can be a pain. Or when it resets itself. I wish I could hit a button and have it return to a custom default position I have set.

Angus, It is a shame that yours resets itself too. I am hoping this is something that Wyze can troubleshoot and fix in a firmware.

Anyhoo, I returned the malfunctioning camera and have a new one. One day later, so far so good. No reset overnight.

My pan reset pretty frequently. My fix for this, rather than physically moving the camera(since I also wanted it vertically pointed down) was to set a motion track with only a single point. This way, the camera always resets to my single point. I can even be viewing the camera, make it move, and in a few seconds, it’ll reset back to “home.” This has made it very usable.

I have 2 mounted. One inside the other out side. They have always done random resets. Never at the same time. That rules out a power flicker. I mentioned this about a year ago. At this point it’s just easier to put them back to the position you want them in. These resets may also occur with the V1 and V2. But go unnoticed because they always remain pointer where you’ve aimed them. The Cam Pan centers itself when reset.
Really these cameras are very Hi tech at a very Low cost. If a little fluke like that happens now and then I just ignore it. I will also say these random resets occurred much more often several months ago then they do now. Maybe something their working on thru firmware upgrades.

Great suggestions guys. I’ll need them because guess what, new camera is doing it too. Set it up Monday. Tuesday was fine. Wednesday, it moved. Except this time instead of overnight, it moved during the afternoon. And instead of resetting to the left it turned slightly to the right - so not a reset position. Ugh.

First image is the designated camera poition. Second is when it turned on its own: 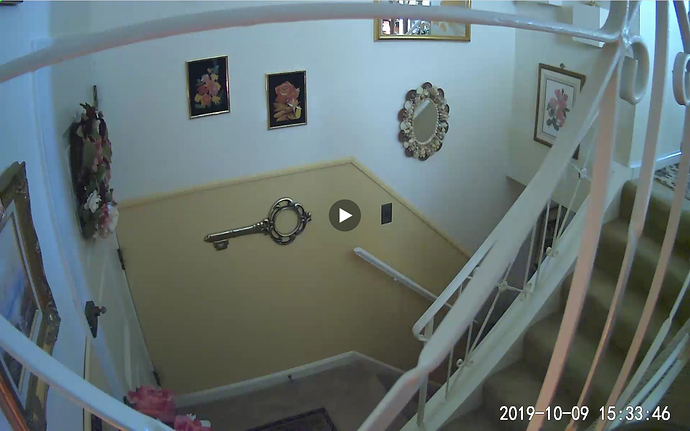 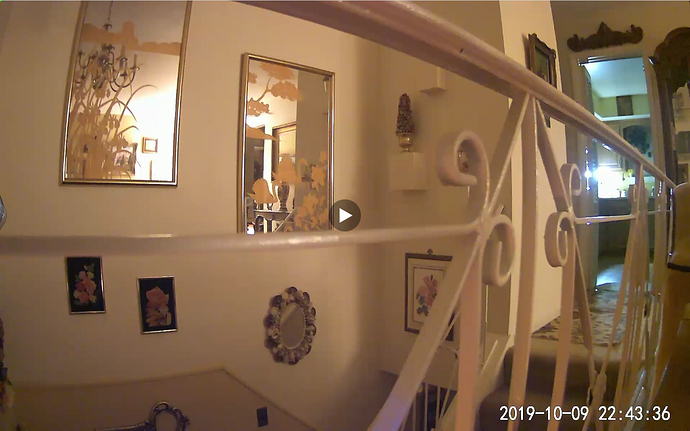 So it’s not the camera. Something about that location. Here’s what I am going to try next time I’m there:

I am also wondering if the problem might be associated with my father’s security system signal. Yesterday was the first day he left the house during the day- thereby activating the alarm during the afternoon. Which maybe why the cam moved for the first time during the afternoon. I noticed on the footage that the camera was fine all day. Then my father left the house. Next image the camera had activated by the sound of my father activating the security system after he had come home. That was the first image where the camera had turned.

If none of my options work, I will try the suggestions of setting a signal way point. I don’t care as much if the the camera moves, as long as it moves back to its designated position. It is so tedious having to reposition the camera every other day.

And I am going to the wishlist section and beg for an option to lock the camera position. So even if the camera gets some external input to move, it will be locked into position and unable to. Please Wyze. Pretty please with sugar on top.