Not directly but it’s certainly making the camera work harder. I really don’t have a good suggestion for you but I’d be wary of that outlet and/or circuit and/or breaker.

Edit: did we rule out just dropping another $20 and replacing the camera?

i moved a diff camera to that same outlet, and it seemd to start to go offline (but stay on) every few hours.

Im going to leave them both plugged into the outlet on the wall, and see if anything happens.

so I moved the camera back to the ceiling power outlet. and guess what? no more disconnects -_-

Maybe my camera just needed a break from that outlet lol

As soon as I re-configured my 2nd android tv box with 2nd TinyCam Pro app to connect to my wyze can, my front door camera disconnectd after 10min

I turned off my 2nd android tv box. and my camera re-connected again.

Is there a limit to how many live streams you can have open at once? This was never the case before hand. I’ve always had 1 android tablet with wyze app, and 2 android box’s with tinycampro showing live-stream 24/7

i used Wyze Tablet App on my 2nd android tv box, and no more disconnects. But with wyze app, I cant view more then 4 strerams at once, i cant “rotate” my app to go into landscape lol

Well sure, every live stream taxes the teeny little camera’s processing and network resources, since nothing by default is bouncing off another server, as far as I understand. So maybe a recent update was the tipping point in taxing out that camera’s abilities to do what you want.

I guess if I load RTSP firmware and then just connect to local IP stream, would multiple streams be better now?

Actually I don’t think so? Your best bet would be a reflector of some kind that only required one stream to redistribute to multiple places. This is beyond my experience though, at least with these systems. Technically IP multicast is a way to do it locally but I kind of doubt it works for these.

Look like Home Assistant is one self hosted system for this sort of thing.

Edit: Oh jeez, as sodcam just pointed out in another thread, you ALREADY are using such a broadcast redirector in TinyCam? I’m not sure of its abilities.

Edit: Oh jeez, as sodcam just pointed out in another thread, you ALREADY are using such a broadcast redirector in TinyCam? I’m not sure of its abilities.

TinyCam can handle a lot, but it depends on your hardware. You can buy cheap TV boxes or much more powerful ones - I have a cheap one.

It runs 24/7 but we only watch the web page stream on a couple of devices, and then only intermittently.

I am having the exact same issue with my year-old camera. Our WiFi AP is about 5’ away with no obstructions. Not running RSTP or anything like that. Issue started maybe a month ago with one of the upgrades.

It is due to the updates Wyze has had to carry out recently. It has happened to all mine off and on for about 30 days or so too with the format changes that were put in the script. I’ve been checking them every day too. kinda tedious but they’re working now.

It seems since the newest Wyze Updates, You can only have a set amount of streams going on at once, which is not ideal.

Before last wyze Update I had

Now it seams the only thing that works is to have a total of 2 things running 24/7 at the same time including Web Server (counts as 24/7 stream). So if I have Web Server running, I can only choose to have Wyze Tablet running 24/7 or my M8S Pro running 24/7. Or I can turn off web server on Nvidia Sheild, And only have wyze tablet running and the M8S pro running

How do I officialy contact wyze support? CAn they fix this? Its been working fine for 16 months until last update

Also in call- case scenrio’s I have 24/7 running on 3/4 cams. The Front Door is the only one that goes offline when doing three 24/7 streams.

opened a ticket with wyze support

Now it seams the only thing that works is to have a total of 2 things running 24/7 at the same time including Web Server (counts as 24/7 stream).

Thanks for all the info!

That does suck. We don’t load our systems all that heavily on a regular basis, but I darn sure want to know the limits before we need to - or commit to any more purchases.

Will be following your updates closely!

The last update broke this limit for sure. For over a year and I half I have had this setup running, and my ISP, Wi-Fi, Camera Locations, SD CArds, cables, power have all been the same. only diff is the firmware upgrade

Wyze support had me use RouteTHis to troubleshoot and send them logs, hopefully they figure it out.

I have the same problem. I have 4 cameras off line right now with the same code error (90). It has been working for 2 years without problems!!

Welcome to the forums!, if you force close the app and open the app back up does it work then?

I agree. I’ve had nothing but problems with my remote cams. Literally started with this app update on IOS. Any cams access outside of my local wifi network barely connect. Despite flying through the first steps and authentication step, it gets stuck on ‘getting video data’ despite my cottage upload speed being close to 41 MB.

Wyze told me my camera is faulty and needs to be replaced, that was their end result after many testing/troubleshooting.

It’s weird, 17 months in, camera has not been moved, nothing has changed in house or network, or power or wiring, and camera just goes bad all by itself?..

Not good, not good…

I had a similar issue while ago. It went offline but it’s coming back to normal randomly. Also I noticed my desktop PC goes offline and I had to restart the PC and router at same times.

What I’m assuming from your described camera behavior, it sounds like your router may have assigned the same IP address to more than 2 devices.

In my case I had 14 different wireless devices connected to the same router(TP-Link Archer C9 with DD-WRT firmware installed) 2.4 and 5 mixed + wired connected desktop and printer. When I turned on my printer or PC, one of my Wyze cams had internet connection loss and inaccessible through the android Wyze app. But the strange thing, I confirmed solid blue LED light was “ON” all time. Also, sometimes my Chromcast and printer go offline randomly. So I investigated every device’s IP address by turning on and off on few devices to find out how it acts. As I assumed when I turned on my printer, it took one of wyze cam IP address. 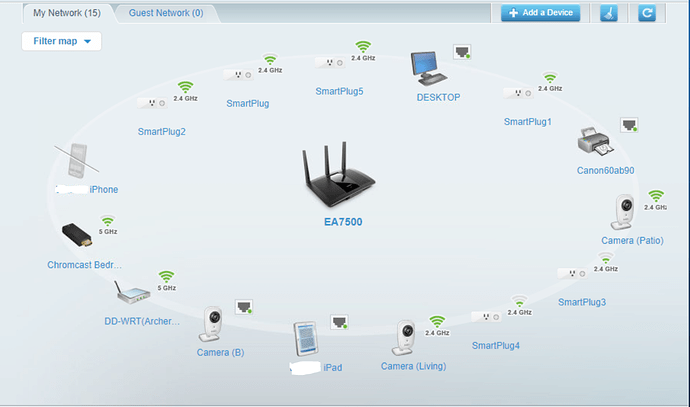 So I decided to assign(reserved) the IP address to every Wyze product to prevent IP conflicts that cause connection loss. So far I haven’t had any issue.

I used to have DD-WRT firmware installed on TP-Link Archer c9 as main AP but I decided to use Linksys EA7500 as main. Current DD-WRT router is connected to EA7500 wireless bridge mode to extend wireless range.

Did you have any other wireless device added to your AP recently?
Have you had one of your devices factory reset other than Wyze cam?
Power supply might be the case but I would assign the IP to each devices.

My 1 single wyze cam (out of 4) is the only camera going offline out of all my wireless and wired devices. Wyze is going to ship me out a new one, its faulty.

Did you have any other wireless device added to your AP recently?
No

Have you had one of your devices factory reset other than Wyze cam?
No

Power supply might be the case but I would assign the IP to each devices.