@WyzeTeam
I suggest you change the way you get people to try CAM Plus.
During a new camera setup the only way to avoid starting the CAM Plus trial is to close the app at the signup page .

Edit; I have discovered that even closing the app doesn’t prevent starting the trial.

Tapping the back button in Android signs you up even though I did not agree to the terms by tapping the Continue button.
This is just wrong. It’s an inappropriate way to force users into a product trial.
This has happend with me twice on cameras I do not want CAM Plus running on.

I can agree with this. Wyze is usually not the type of company to to this! Please fix this Wyze!

Tritto. Very poor form, Wyze. I was really counting on you fixing this practice before the new app left beta. It’s the kind of thing a shady money grubbing outfit would do. It also turns people away.

The timing just seems bad.
They’re telling us that PD is costing more that they thought so are going to have to pay for it. All while forcing people to use person detection.
It really makes me question how sincere they are.

Yes, hadn’t thought of it that way. Also really poor timing because the quiet release of the Alexa PD announcement feature has me suddenly loving PD whereas I never really cared about it before. It’s something that I would pay for.

Meaning the strong arm tactics aren’t necessary when you have a strong product.

I don’t want Cam Plus at all. Can’t figure out how to disable/remove/prevent this unwanted “feature”. Screenshot here doesn’t match my screen.

Go into Services, in the app, and turn off Cam Plus for each camera.
You can’t actually turn off the trial.

WYZE has completely ignored this thread even though I tagged them. This leads me to believe they know what they are doing ard don’t care.

I really don’t like how Wyze forces you to use a Cam Plus trial with the setup of a new camera. I think you should be able to hit an x or something to not start the trial.

In brief: it’s a sleazy practice.

While I’m not condoning what seems to be happening, no harm, no foul here, imho. There’s no CC required so, the functionality will work until it doesn’t and that’s that. There’d be a huge issue if it started charging people automatically like most trials do. This is just my 2c. Ya’ll are not wrong that it is never cool to not offer a “no thanks” option, but as it is, there doesn’t seem to be any downside, apart from maybe loving the functionality of Cam Plus and then losing it when the trial ends.
As long as they don’t take away my “Person Detection Lite®”, yes, I’m calling it that :), then I’m ok with a trial that I can’t say no to.

If I remember correctly, when I set up my Nest Camera for the first time years ago, which happened to me like a year after I bought them (like an idiot). I was also enrolled automatically in the Aware bundle trial (without knowing) and the only time I realized it was when I lost the functionality, after which the cameras became paperweights (lol - If you use Google Nest Cams with no sub, you know what I mean). That was due to my not paying attention, and that will never happen again.

Hopefully Wyze will change their mind and pop in an option to not use the trial, however. As some of you have stated, it’d be nice to have a choice of when to enable the trial vs. upon camera setup.

there doesn’t seem to be any downside,

The downside is there is no way to not agree to the Terms of Service.
Also, I should be able to choose when and if I want to use the trial.

I have reinstalled a v2 to another place and I have the same message as yours for a free 15 days. If I activate it, does it will be renew automatically after the trial and will being charge for a month or a year since I have already subscribed for 2 CamPlus licenses?

I don’t think so, but you never know. If they didn’t have my card number, I’d be more comfortable.

It’s very aggressive not to have the option to decline at the time of installation. However, I closed the app completely but there was nothing I could do to refuse the free period. At the moment, I haven’t activated it. If I do, I wouldn’t want to be charged for another licence after the trial.

@WyzeGwendolyn , is there an automatic subscription charge after the free subscription? And why we don’t have the option to refuse the free trial?

It sent me this email after it auto-enrolled me: 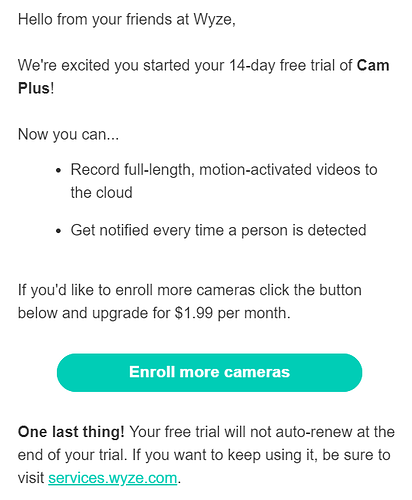 Note the last line said it will not auto-renew at the end of the trial. My trial just barely ended and it canceled the subscription and is telling me to reactivate my subscription for it, so it did indeed cancel automatically, but then, I don’t already have subscriptions running like you do.

Ok, I have just received the email after posting. « No automatic renew. ».

Thank you @carverofchoice , I saw your message juste after receiving the email.

Looks good but do you trust them? I don’t have a lot of trust in a company that forces trial signup.

I wondered if you found a way to cancel the forced signup. I tried pressing the back button and it didn’t work, so I was hoping that just closing the app like you said you did might’ve worked. I guess not. It looks like if you activate a cam in any way it automatically forces the subscription.

That really sucks. I didn’t even get to test it out. I really wanted to save it for a while and use my 1 free test in the future, after they worked out bugs, then use it on one of my main cams during a vacation or something where it would actually be a valid and useful test. They just forced me to try it out on a cam I never use and hardly care about and wasted the opportunity to convince me it was worthwhile on a couple of cams. They’re screwing themselves honestly. I didn’t try out anything with cam plus on that cam the entire time because I don’t use that cam…it’s just a backup in case I need to refer to it later.

If I am charged after the test, I will cancel from my account. Supposedly, when we cancel a subscription, we get a pro-rated refund. If that happens, it will give me the opportunity to test the system.

If that happened, I will be in your thread again🙂

I didn’t found a way to decline the free trial. This is a 6 months old camera that I just put back in my shed. To do this, I had to change its network and use my garage router. You could take another one of your cameras that never had free trial and install it in place of the one you would like to have free trial.

Wondering if using an old app version to activate the camera avoids the problem.

It looks like we can just register any camera at any time and get a 14 day trial. I suppose you could register your cameras every two weeks and continually be on a trial.
You don’t have to keep the trial on the camera you just registered. You can associate it with any camera.