Cam Plus Detection with IR

Does the Cam Plus person detection work if only IR lights are used at night?

Yes. I have all my external V3 on IR NV Far Dusk and they are quite effective at Person detection when in IR NV. I can walk the perimeter and produce AI PD events on every cam (except the doorbell… The FW is still sickly on that puppy).

It works , but not accurate . Person events at night will still be labeled as motion , the cameras have a hard time accurately identifying motion at night with night vision on

I hope in the next line of cameras , they have higher resolution to help better identify motion .

Thanks. I’ve got a kitchen cam that keeps giving false person alerts at night from light flickers so I thought I would switch to far IR. Fingers crossed that I’ll get more sleep now

That is subjective based on individual cam placement and conditional settings. I have mine dialed in such that a person at night is very rarely missed, if ever. I can’t say as much for false PD tags though, but tagging real people is the most accurate AI category for me, even at night.

I think light flickers might make it worse with IRNV since visible light is highly amplified in IRNV.

The camera doesn’t have the issue , it’s more so the AI not being able to correctly identify said motion.

The camera doesn’t have the issue , it’s more so the AI not being able to correctly identify said motion.

Will have to disagree with you. The majority of people want these cams to be the Holy Grail of point and shoot effortless perfection that work without any logical thought on their part. Install, push button, work. When they don’t, they blame the cam, or the AI, or the app, or the coding, or the subscription. IMO, the majority of issues where the cam doesn’t meet expectations rests on the user’s application and setup of the tech and the users overinflated expectations, which I too have been guilty of in the past.

I agree some of my cameras aren’t at the best places but even with the best placement , 100% sensitivity, No detection zones set up , person detection on , and everything else the user can tinker with it ends up being the AI’s fault .

I don’t know how many times I’ve had to review all of my events at night when I’m walking out around my property and not just for person events . Both vehicle and pet events as well aren’t that accurate .

I just hope Wyze takes their cameras a bit more serious , the AI is definitely what needs some work on . I really don’t trust it . Especially at night . It is very bad .

Hopefully the next line of cameras have 2k or higher to better help identify motion at night .

IMO, the majority of issues where the cam doesn’t meet expectations rests on the user’s application and setup of the tech and the users overinflated expectations, which I too have been guilty of in the past.

Will have to disagree with you , Wyze started out with the cameras and that brought them out in the limelight . Wyze promoted themselves as security cameras , and then were told that they aren’t security cameras yet have AI features for security and Wyze releases HMS and cam plus pro etc for security.

Some of the reasons I really like my v3’s is for the affordability, local storage, the AI labels (person , pet, vehicle , package) no other cameras offer all 4.

Users expected the “holy grail” bc it was promoted as such and then were told that’s far from the case .

All in all though , I know they’re only $35 cameras but when they’re promoted as real security cameras that could step up to the competition and get the job done but it seems far from it .

and it can motion tag a person

The v3 sees pixel change as motion, and that “motion” is indicated visually by the motion tagged green boxes. The camera at this point doesn’t know what it is seeing other than a color or luminance change. Once the event is uploaded and analyzed by the Ai, then that’s where the person recognition comes in.

How does the AI determine what is a person ?

…and they still do. Here is their latest marketing email sent to all Canadian customers: 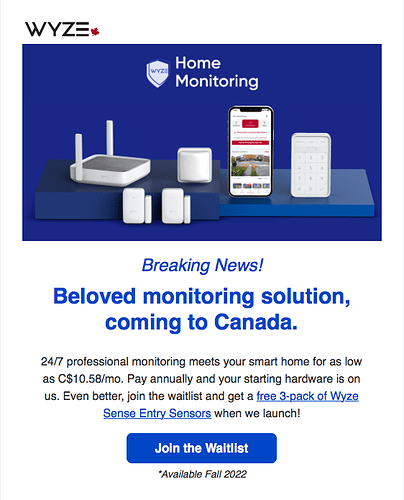 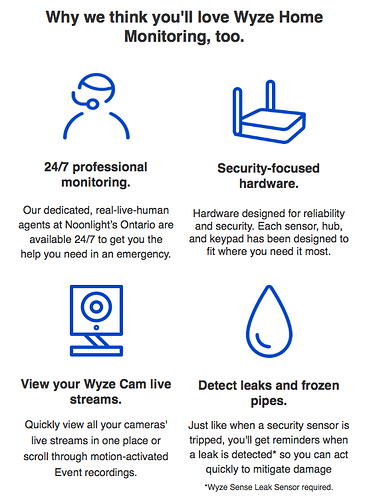 They are testing the Canadian Address support for the Monitoring Services in the new App Beta test.