I keep getting ARP warnings about my Cam Pan switching MAC address every 30 seconds. The vendor switches between Wyze (2c:aa:8e:xx:xx:xx) and Google (20:df:b9:xx:xx:xx).

I assume this is intentional because its the only device on my network that does it, but why?

I have seen this with my v2 cameras also. I have sent in a support ticket about 7 days ago and have not heard anything. 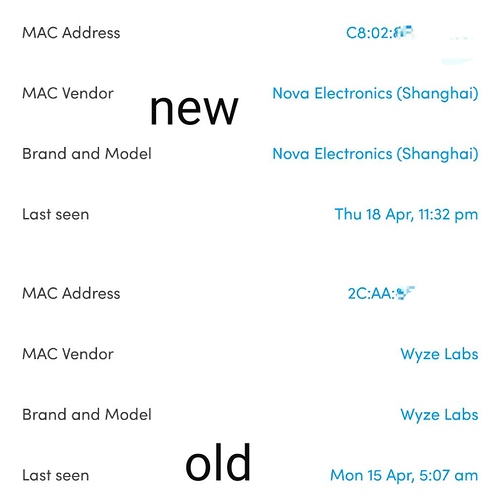 I believe one of the firmwares had a bug where it would switxh between the cameras MAC and the wifi radio MAC.

It might have been a dumb config problem on my side. I originally had a DHCP address conflict with a google home mini (which only existed for a couple of seconds before I corrected the config), but for some reason the Cam Pan was caching its conflicting IP instead of pulling the new address from the DHCP server. Forcing multiple disconnects from the managed wifi didnt fix it, but a power cycle did and it hasnt shown up in the logs again since.

My guess is you found a way to get the firmware bug to present itself. This could be a good clue, WyzeTao.

or it could have just been 2 devices with different MACs trying to use the same IP and alternatively sending ARP packets to the router and confusing it…?

I remember the ReplayTV had a similar problem. Back in those days, the only way to prevent it from avoiding the Siren song of a DHCP server was to put it on a static only network.