Agreed, if you are set on absolutely wanting to know which camera the sound is coming from without any doubts then choose only one camera to play the sound. This would be a great additional feature to have, for sure.

On the other hand, I have 2 kids and want to be able to monitor them visually and audibly at the same time, not just hear 1 of them at a time…both of them.

Thus, making it user selectable to choose which camera or cameras to hear the audio from would be the best for everyone’s situation.

Add ability to turn audio on 1 or more cameras in multi view.

@jeff007 which current camera set up do you have that has this option for audio on simultaneous camera viewing?

Its not an option yet. We want it to be an option.

@happyclammer I know it’s not an option for wyzecam. He said he had a current camera system that allowed this. I was wondering what that brand was.

I have multiple Foscam cameras that are all 3-5 years old. I use the “Foscam Pro” app for them on iOS that gives this functionality.

Here is a screen shot of my setup. Notice the somewhat transparent icon in the lower left corner of each camera that is connected. All I have to do is press that icon to toogle the sound on/off for each individual camera while in the multi camera view area. 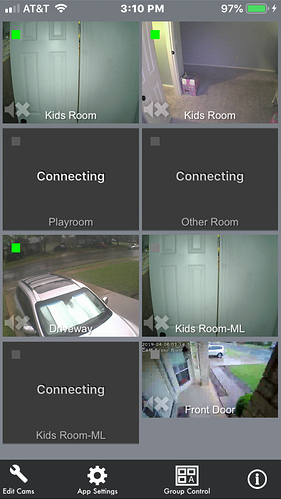 Another item to mention is not just audio but also BACKGROUND AUDIO for one camera or multiple cameras. This means that the sound will continue to be audible but without the picture if you close the app to do other things, turn the display of the phone off, and/or lock the phone. My current setup does this as well. This makes the cameras act as sort of a baby monitor when needed.

Please see the post below for the feature you are requesting. You can VOTE for it at the top-left of the topic.

Love these cameras but the one major missing feature is being able to play background audio (listen to camera with screen off or when using another app) on my iPhone. Any plans to add this so we can use these as baby monitors without draining our phone battery?

One thing that would be great is if you can have volume play if you want it on the group camera display. I would like to use it as a baby monitor as well and would love to be able to hear both cameras as well see them at the same time. Is this something that is possible. As of now i have not seen this happen but with some script to the software I don’t think this would be an issue and also a great selling feature for baby monitors ;). Thanks again everyone at Wyze and keep hitting them home runs!

I too would like to see this. Right now I am running 2 iPads, one set to group mode and one set to the individual camera I most want sound from. I thought I had gotten away from needing multiple tablets when simultaneous streaming was introduced!

I also would like the option of selecting the audios of any combination of cameras. I love the Foscam way above, but if you can’t do that you could bring back the “go to” button that appeared at the bottom of the tile when you touched it, and add an "enable audio” checkbox next to that. If you do it that way, you’ll probably need to add a visible indicator that audio is enabled,

However you do it, please do it soon! Thanks.

Audio while in group view was temporarily removed for the release due to a bug. My understanding is it will be back. But if you tap a camera in group view to bring it into single view, then you should be able to get audio then.

I’m curious about one thing you said: with the app logged into the same account on multiple devices, you should be seeing the same groupings on both devices. Are you not seeing that? Or is one of the devices logged into an account to which the cameras are shared?

I am logged into the same account on multiple devices. The first iPad is showing group mode (no audio), and on the second I tapped on a camera in group view to bring it into single view so I could hear the audio. So I have a silent 4 cameras on one iPad, a audio-enabled single camera on the other.

That is an interesting work around but I do not have extra iPads/tablets just laying around the house. Thanks for letting us know about your work around because that could definitely help others who might have the extra hardware to do so.

Update: Android 2.3.63 was released to Beta testers which fixed the crash issue when opening an event video from the notification. Hello everyone, new App was launched to Beta testers, alongside the release, new Sense grouping feature and more Sense triggers in Shortcut is unveiled. Hope you will enjoy them. If you have any feedback, please let us know. Thank you very much. Please ignore motion and vehicle tagging for now. We will update soon. Android 2.3.62 Added grouping support for Wyze …

simultaneous audio would be good or even better alternating audio…3 to 5 seconds per cam…just tried the beta, and you have to manually select the cam you want to hear…

I vote for both, since I’m afraid I’d miss something during alternating audio

A post was merged into an existing topic: Playing Sound for Multiple Cameras in Group