The year 2020 will end with a special astronomical event: the closest great conjunction of Jupiter and Saturn in 397 years. Other websites are claiming closest in 800 years!

On December 21, the two planets will almost touch in the sky. It is going to be so cool!

Get those V3 Cameras pointed to the sky. Take full advantage of the V3’s StarLight sensor!

You don’t want to miss this event!

Otherwise, you’ll have to wait another 400 years or so (The slick little V3 cameras might last that long, but would be out of warranty.) (Then again, in 397 years from now, Wyze will be making a V400 camera.) @WyzeDongsheng @WyzeGwendolyn

@Bam, @DraconisRex and others in the know.

What’s going to be the best way to capture this CONJUNCTION event?

A multi-night time lapse to watch the planets merge?

A continuous motion event captured on an SD card?

Is this going to happen in a single night … or will Jupiter and Saturn be close together for several nights in a row?

Anybody know how high in the sky the planets are going to be during that timeframe?

As an apt student of V3 Astronomy, I’m asking for help (yet again).

Anybody know how high in the sky the planets are going to be during that timeframe?

Hartigan said the planetary duo will appear low in the western sky for about an hour after sunset each evening. 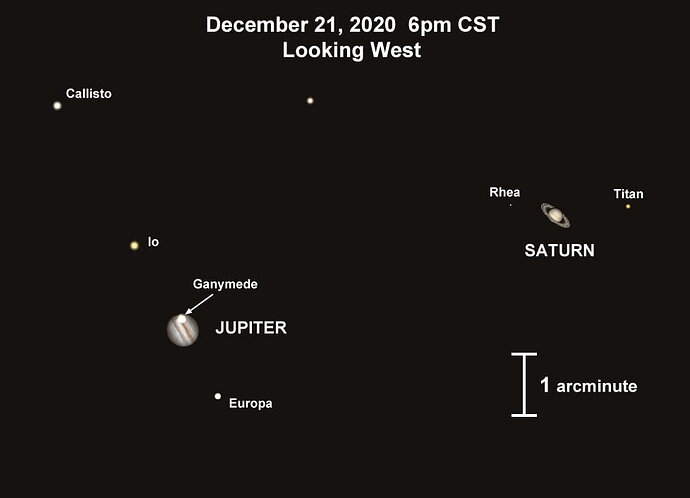 In December, Jupiter, Saturn will look like double planet for first time...

Just after sunset on the evening of Dec. 21, Jupiter and Saturn will appear closer together in Earth's night sky than they have been since the Middle Ages, offering people the world over a celestial treat to ring in the winter solstice.

Thanks for the info. Maybe I’ll fly down to visit my friend in Panama. Oh wait, Panama, like the USA, is shut down due to Covid. Dang it.

On December 21, the two planets will almost touch in the sky. It is going to be so cool!

You beat-me-to-it @todwatts because I’m disconnected in the evening… my wife just told me about it last night (see post above). I told her I’d post it in the Wyze Forum today so everyone could prepare ahead of time (I had a snazzy thread title picked-out in my head - well, to me anyway

I’m curious what your snappy thread title would have been. We could call it a “sub” topic title.

Maybe I’ll fly down to visit my friend in Panama.

The alternative is to make sure your friend has a V3 camera aimed at the sky for the upcoming event. Of course that may prove difficult since today I noticed on Wyze’s V3 page it says it ships in January 2021 (yesterday it said December). 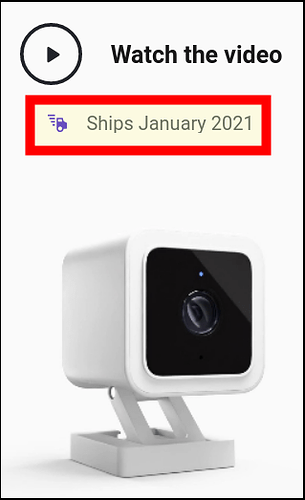 …auuuggghhhhh… no V3 for me to be had in time for December’s event. I’ll rely on all of you who’ll have their V3 cams to capture the Double-Planet Phenomenon

I’m curious what your snappy thread title would have been.

Hmmm… I’m keeping that under wraps while discussing it with my advisor (correct, my wife) deciding if I should post it or not

It’s about the double-planet event, but with a different sub-topic as you mentioned above. If I decide to post it, I’ll reference your thread.

More than likely the thread would just get sucked-up into a black-hole, never to be seen again.

I also noticed that Jan 2021 shipping date this am … my wife actually rolled over first thing this morning and told me to order a couple more V3s. Honest! It was so romantic! My original V3 pre-order is being delivered today … after several enroute shipping delays … so I’ll have multiple V3s (in addition to the one I won) in time for December.

Well, here’s the surprising part … even though my wife told me to order more this morning, I decided to wait to order two more cameras until the accessories are available … because I know I’m going to want them also!

More than likely the thread

Making an analogy between what the two planets are doing and what rabbits constantly are doing in my backyard?

I also noticed that Jan 2021 shipping date this am … my wife actually rolled over first thing this morning and told me to order a couple more V3s. Honest! It was so romantic!

Well, here’s the surprising part … even though my wife told me to order more this morning, I decided to wait to order two more cameras until the accessories are available … because I know I’m going to want them also!

Hmmm… are you sure you weren’t in a parallel universe or dreaming perhaps? Hilarious! Thanks, I cleaned my monitor with coffee spray while reading the romantic line

Wow! That’s remarkable restraint on your part to wait for the accessories instead of getting those V3 cams while they were “stamped-for-approval”. However, since I won’t be able to get the V3 cams in December… I might as well wait like you’re doing. Then, I can order the cams and accessories together (save money on s/h - put it towards another V3 cam).

FYI: I was concerned that ordering one cam wouldn’t get approved, yet… last night she said maybe we should order 3 or 4 of them

Making an analogy between what the two planets are doing and what rabbits constantly are doing in my backyard?

I would LOVE to capture it. Sadly WYZE is not shipping then until mid January. Why all the buzz for an event that happens before they shipped.

Hi Bobert! Wyze started shipping the first batch of pre-ordered V3s with Nov delivery dates a couple of weeks ago. Other pre-orders are scheduled to ship in December. Current orders won’t ship until January.

R/gadget in Reddit had a contest earlier than that where 25 lucky folks won early V3s. I was 1 ot 10 people who won prizes during the day long Wyze Career day.

As a result, I and others caught a bunch of Leonid meteors during the annual Leonid meteor shower 10 days ago. Check out “captured on Wyze” section for examples

The Wyze V3 has a “starlight sensor” feature that’s absolutely out of this world. It lights up the night sky!

So a lot of us are excited about that feature. To be honest with you, I wasn’t interested in the stars until I received my V 3 camera. Now I’m obsessed with it!

Hope that helps explain all the posts.

I ordered my 3 v3 cams on Oct 27th and without any notice I looked at my pre order status and surprise. My cams are now going to be delivered Jan 2021 rather than November or even December. As much as I like the cameras I feel that Wyze continues to disappoint. I have 5 original cams, 3 v2 and 3 Pan cam and 2 Outdoor cams as well as numerous sensors and light bulbs.

I believe my run with Wyze will be coming to an end and I will go back to using Ring products again. I may be paying a premium but at least I’ll have product for myself.

I hope you are right. I per-ordered mine Nov 4. I do have my doubts that they will arrive by Dec 21.

Anyone try marrying the V3 to a telescope yet?

I’ve done some preliminary 3d printed mounts (for the v2), but no starlight sensor, so I’d imagine the V3 would be a lot better.

I ordered my v3 cams October 29. Was told they would come in November. Now they say December. I’m waiting for the next email from wyze that says the V3 will ship within my lifetime.

Hopefully my V3 comes before then. I have no idea when I am getting it!