Any way to have a RULE start a LIGHT SHOW? Santa Claus would like!

Hey, Christmas is coming, and it sure would be nice to have these do a little flashy flashy in my window. But, I was a bit surprised that the controller really didn’t have light shows, EXCEPT if using “Music”, and then, it helps to have music!

I did find that “Color Focus” does something when silent, then flashses brighter on noise. OK, but not what I was hoping for. Why require music for cool patterns?

The OTHER thing that disappointed, there is no way to make a Rule that sets a “Music” choice, and ON seems to come on white. I finally figured, I think, a work-around: I have a rule to set brightness to 100% at sundown, then 1% at 9:30PM. I’m hoping that this will work (until the power is interrupted…)

I second this, would like to use the light patterns WITHOUT it reacting to music to work

I’m beyond amazed that they do not have effects without music. I wouldn’t have preordered this if I knew that. Did anyone else feel like they were under the impression that it would be able to. I’m so confused that this was an oversight since it is why people would buy this over any Amazon cheaper alternative.

You have to long press the Strip to setup your specific color segments.

For music (lights moving), you can customize to only use Red & Green for example. But, yeah, forcing the Music to have to be on was a bad design choice. I feel like they will be addressing this sooner rather than later.

100% bad design not to launch with something that would be a “Pro” feature.

You could easily set this up within app, the controller wouldn’t need to be updated/changed. This can easily be updated and wouldn’t be hard for their team. I’ve been waiting a long time and I’ve never been chosen to beta test hardware, when I saw this I was also amazed no one caught it.

While I don’t have a ‘rule’ that does this, I’ve setup my two Light Strip Pro’s in the app as follows: 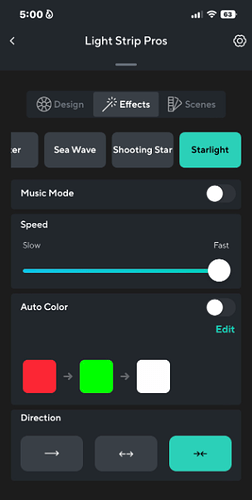 Now, to order some clips to attach them to the two inside windows that I want to try to setup with these.

Considering these to attach them to the inside of the windows: