There are so many excellent suggestions here within this one topic that I have decided to turn off watching it as I get 10+ emails daily. I do realize that there are other ways to monitor it. I may use tracking

There is just so much here, and there is no way to vote for which ideas within this topic are my favourites / priorities.

It is challenging to see the ideas within this topic that are actually being worked on or implemented.
I appreciate seeing the Existing and Requested topics at the top. Thank you.

It is good to see so much interest in adding adding to the Wyze Rules as this is critical. I have been involved with home automations since the early days of X10. There is some basic stuff that would be helpful here. Many have mentioned it over the months.

It might be helpful to have keywords within the topics so that we can see how interest in the Wyze Rules by category, device, by action / activity types.

I would do the same thing for Playback, Events, IFTTT topics.

Applying some AI categorizing to these topics, could fairly quickly allow a view of the Wishlist by device, action, activity, function, …
But that would take away fron actually getting the functionality added … and so it goes …>… … …

It would be nice to vote on each of these sub-topics, and to see a note of which are “in progress” or “under consideration”, “in testing”. Some may be on this list for years… 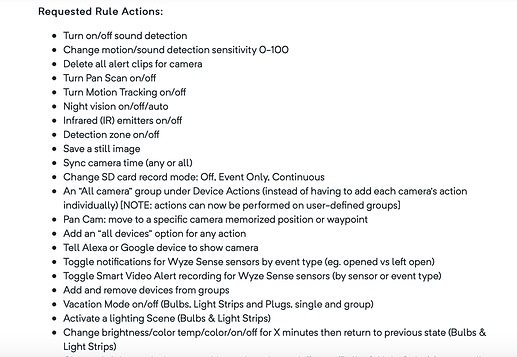 I suggested making the list a “Poll” where users could then go vote on which ones are the most important to them.

@Loki or other mods, will you consider the potential value of updating the list of rule requests in the first post to be a multiple selection “Poll”? Rationale: People can then mark which rules are their most desired rules and the highest priority. This allows Wyze to see which of the dozens of requests would more likely be the most useful to most of their customer base or bring the most value and which ones they should consider working on first. Then this thread will both aggregate the total r…

Although, Polls say they have a limit of 20 options, so they would have to be done in multiple polls depending on the length of the list:

Which Requested Rules Are your Favorite? Poll 1

Which Requested Rules Are your Favorite Poll 2?

Which Requested Rules Are your Favorite Poll 3?

Though there might be issues with this. Does the poll start over anytime one of the options gets moved from requested to implemented? I don’t know I was mostly just trying to think of other options so it would be possible to tell how in demand different rules were. I guess the main thing is knowing that the rules team does see and review these sometimes. One of the employees did recently tell us that there is an update coming to the rules engine soon and that the rules team has been working hard on some big upgrades. So I look forward to whatever updates they are doing. It’s good to hear that they have been productive. I hope to see the fruits of their efforts soon.

I would love to see a trigger based on a notification received on my cell/tablet.

Option to have a garage door that is left open to try after X minutes to close.

Ability to activate custom scenes for lights using rules. The ability to have Alexa do this would also be great!

A post was merged into an existing topic: Add More Device Triggers for Wyze Rules

Same for my Wyze Light Strips

Please add the ability to have a group of lights to have the action: Flash

Do you know how to add voting buttons for this one? How stupid simple would this be to add, right??

Turn off LED display via rules or the app slider

[Mod Note]: Your request was merged to this topic for consistency in grouping similar requests. Please remember to scroll up to the top and click the VOTE button. Please note that LED display control (on/off) via app is currently undergoing beta firmware testing and will be included in the next public firmware release.

Like to be able to run a rule shortcut that turns all valid devices into vacation mode (or takes them out of vacation mode).

I use rules to set the monitoring and notification settings on my Wyze Cams for when I am home vs away and it works great.
I’ve noticed that while I can toggle “Record Motion Events”, I cannot toggle “Record Sound Events”.
It would be very useful to have this ability to set in rules as I do not want to record motion or sound when im home, rather only when im away. Without being able to create such a rule, I need to toggle sound detection on and off manually for each of 7 cameras… quite tedious.
Please help Wyze!

I was hoping that these new color BR30 bulbs would have the same capabilities as the original color bulb. Just a heads up for everyone. As of this posting the following actions are missing:

To add a bit more, i would like the ability to select a scene for a rule.
I already saved several scenes with colors match and i like (having the same scene for a different bulb, is another #wishlist), but being able to select one of the scenes to turn on by a rule would be very simple if implemented.

[Mod Note]: Your request was moved to the correct #wishlist topic for better visibility. Please remember to scroll up to the top and click the VOTE button.