I now own so many wyze products that they are difficult to manage. In particular, if like a phone shortcut to arm it disarm the home monitoring, with just one it two clicks.

This would reduce the likelihood of false alarms, or delays in responding to monitoring triggers.

It also is getting painful to scroll through lights and cameras to get to the vacuum cleaner or the bathroom scale. I’d like to be able to group different things together, near similar or related home automation apps from other vendors.

Function to add new devices to a dedicated location for cases where Wyze products exist in two seperate location ie the office and home. To have a dedicated page to those products in the single location without having to scroll through multiple cameras trying to remember which camera goes where.

I understand groups within groups might be difficult, but My main request is just being able to group different products together based on rooms, and possibly be able to just turn everything in that group off with one button.

The Wyze App would be more flexible if it allowed users to create multiple Homes, each home representing a separate physical home or location. This would allow users with Wyze devices in two or more homes or separate locations to group them together in the same Home within the App.

I’ve found posts similar to this idea but not exactly so I’m asking it specifically.

This should be a just a software upgrade.

I ran across the post for allowing multiple copies of the Wyze app in ios:
https://forums.wyze.com/t/double-wyze-app/183163

However, I would like to propose a different solution. How about allowing us to create multiple “homes” in the app and then assign devices to each of these. This would allow people with multiple homes, homes / businesses / churches /… to maintain each of these areas from a single app but still have the ability to group them more easily by location.

Next, would be the ability to have different permissions for the “share” option. In our instance it would be ideal if at least one other person in the church could have a share that allowed them to create codes for the locks. This of course without giving out the main account information.

The ability then for a single login to have home monitoring at multiple locations could be an extension of this feature request.

Ability to create custom GROUPS containing any combination of DEVICES.

For those of us that have multiple locations tied to our accounts (some of us are also caregivers to people not in our home) I would love to be able to group my Wyze products freely instead of all cameras or all doorbells.

Can you add a “Health Group” or something similar to the app for grouping devices like the Band and Scale? 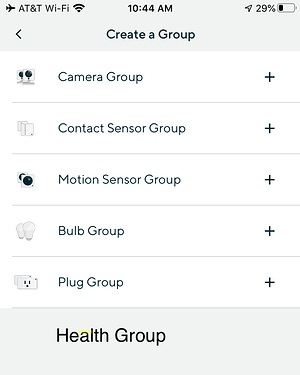 Thank you for adding groups. Two asks. We need an ability to customize group names. I would like to classify my airbuds and watch under Personal Devices. Can we have group names that ate 25 or 30 characters long instead of just 20.

Ok, so user of 7 cameras here, door lock, sensors, buds and basically I’ll give everything a try. My biggest thing is the app UI, there should be some way to sort/hide/group products. I know you can group things but you cannot group the door lock with the bridge for example. Why, all they do it take up space in a linear scroll UI on my app. And my buds, it would be nice to no see them or have a tab for things you almost never need to click on. Just saying the basic UI could do with some major improvement cause I am sure that I’m not the only one that wants a little more organization or modernism.

[Mod Note]: Your request was merged to this topic for consistency in grouping similar requests. You may also wish to comment on and/or vote for “Option To Hide Certain Devices From Home Screen”. Remember to scroll up to the top and click the VOTE button.

I can’t believe that the video doorbells, plugs, and floor lamp, can’t be assigned to a group! It can’t be that hard of a programming task. My home page is cluttered with multiple devices so this feature would certainly clean things up.
Thank you!

Please allow us to define groups, rather than forcing us into grouping like things. For example, I want a group called “Living Room”, every other App allows this! Problem Solved.

I think the new group for lighting is a great idea. To make it truly useful to be able to control all the lighting in an area or desired group it would be great if you could also group Wyze plugs, outdoor plugs, and switches in the same group with bulbs and light strips. So they could all be turned on or off with a single tap instead of having to hunt them all down and turned on individually.

We need the ability to create rooms to better organize our devices within the app. Similar to how google home does it.

This app could simply use a rewrite IMO instead of just the continual “bolting” on of additional devices in ways that I think we can agree just does not make sense. Minimally this needs to support multiple locations (we have devices at three buildings), multiple rooms, enhanced security (I need to allow others to fully manage a device), …

If that is not something that Wyze can accomplish THEN I would again plug for an open API for devices. This could be accomplished TODAY if that were available using Home Assistant. Not kidding!

Personal opinion / disclaimer - I LOVE the Wyze products that I have and they fill needs for my overall home automation / monitoring. However, I would like to see them slow down or stop pushing out so many new things and instead focus on enhancing the existing. There are SO MANY things that could be improved in the current products that would take them to the next level.

Include switches in combined Lighting Groups

Lighting Groups were just added, which I’m in favor of. I think they should include the option to include Wyze Switches as well though.

I think there should be an option in the Wyze App to create a general group without mandating the devices to be selected for addition. For instance, I have (3) groups then I have two recent images from two other devices when I open the App.

My Current Groups: (all these groups are cameras only)

The additional group I want to make:

*we should have an option to create a group and add whatever devices we want to it, whether it be 3 cameras, one doorbell and a sensor. These group additions should not be mandated as every house is different on how the user wants to see or setup their security.

Wyze should support “Locations”. During configuration, the App would ask for a Location (Beach House, Main Home, etc), and then when you select your Location from the main screen, you would see only those devices added to it. Further, allow the user to define Groups in each Location, e.g. Living Room). I could then control my Living Room devices (cam, light, plug, etc) at the Beach House very easily. I don’t understand the UX of having Wyze define device Groups - it’s pointless?

As you can see, it should now be possible to have another group called Living Room under Main Home, and only the devices in that Location would show up in the Group config. This seems like how it should have been designed. Perhaps in the upcoming refresh?