Nope. Not there on this one…

You may need to edit the the system tray for the icon to show up. If that doesn’t work, I’d recommend the free AZ Screen Recorder from the Play Store. Here’s a YouTube video that covers the basics.

Not available. I had the AZ Screen Recorder on this phone for a while - for live streaming my drone, but used it so seldom (never other than proving it worked),that I removed it a year or so ago.

WyzeAndy has a fix here if you want to test. I tested everything I could and it looks good.

My Wyze T-Stat just lost WiFi as did my switch. The Switch established a connection on its own, the T-Stat did not. I had to pull it from the wall wait for about 15 to 30 seconds and then plug it back in. WiFi connected after that.

I saw someone elsewhere reporting some “buggy” activity starting up about an hour ago, including weird connection issues. May or may not be related.

My TStat still shows connected, but will keep an eye on it to see if I can replicate.

Could be something going on. 2 devices lost WiFi one came back and one didn’t.

I know it isn’t my network, just happened randomly.

I’m seeing more posts about connectivity issues (on other platforms), so I think something happened (though not affecting everyone or widespread, it seems more than just coincidence or normal sporadic individual issues).

Not sure if it’s app related but suddenly, my oldest v2 started having issues, filter not retracting and losing connectivity, restarting, twice caused filter to retract and cam to reconnect. I turned off night mode and it’s been ok. So I’m suspecting it’s a mechanical issue more than app related, but weird stuff is unfortunately too common when it comes to Wyze. The next oldest v2 lost connectivity once but has been ok for the most part. Other devices seem ok.

same here on b17. lights turn on with a person, but fail to turn off after time selected (five minutes)

this issue occurs in multiple devices using the same rule

The App is showing that the T-Stat does not have WiFi as sown in image below. However, The other images shows that I can connect to my T-Stat via the app, see the Remote Sensors, and a picture of the T-Stat shows that it is connected as there is no WiFi issue icon.

Since it is still functioning and the images show it is actually connected, I am thinking it is with the app - maybe. 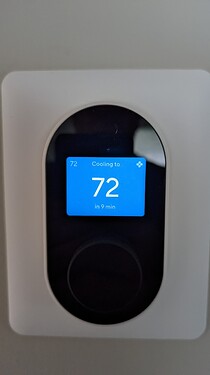 Edit: the a602 fork fixed this issue

See if that helps.

That worked as well as doing the restart. Submitted logs to Wyze so they could research.

b150 Home Monitoring tab won’t open. Stays white with a Failed tooltip popping up at bottom.

Issue is on both my devices Android 9 and 11. Reverting to release solves it. Clearing storage, logging out and in does not

Wyze is aware of the issue and working on restoring service. A server issue is currently affecting beta apps.